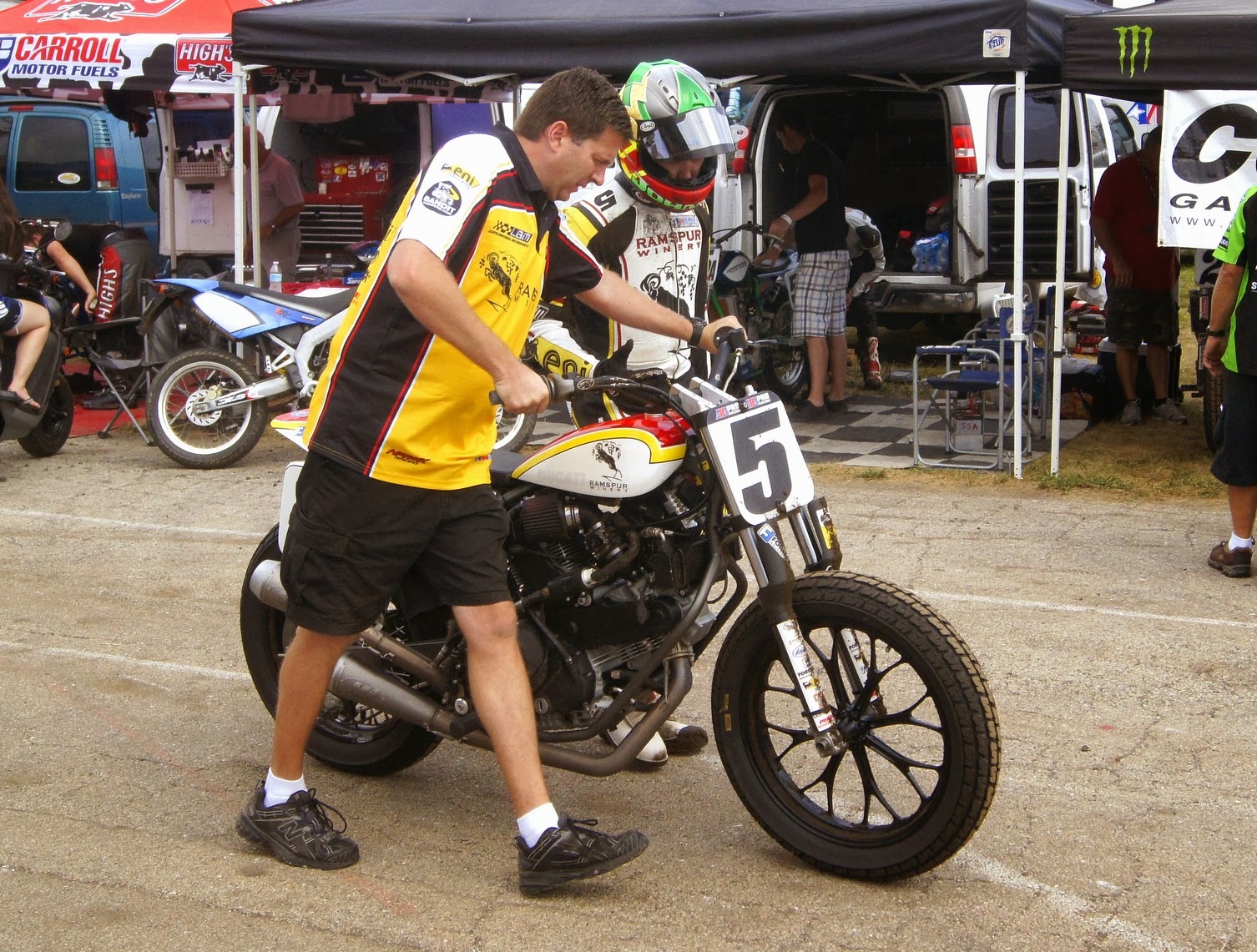 Johnson, who officially joined the team at the Indy Mile round on August 17, 2013 after just weeks earlier splitting from his long time association with the 3-Time Grand National Championship-winning Zanotti Racing team, will go it alone for the 2014 AMA Pro Flat Track season as the sole rider, after the LBM team and former long time rider Henry Wiles split shortly after the Springfield Mile doubleheader over the Labor Day weekend last season.

The team, originally based out of the Columbus, Ohio area, is now spaced across the country with co-founding brother Mike Lloyd still based in the Columbus area, his brother Dave now having moved further south to the Atlanta, GA. area, and the team's second year crew chief Brent Armbruster based along with the majority of the team's machinery in the Clio, MI. area. Johnson still lives in eastern Pennsylvania as he has for the better part of his now dozen year Pro racing career.

The Parkinson Brothers team may best be known for their fielding of equipment for 2013 AMA Pro Flat Track Pro Singles Champion Stephen Vanderkuur throughout his title run during last year's championship-winning campaign, and also took a big step to help Johnson after his split from the Zanotti team last year in fielding the Honda CRF450R Singles Series mount that the 2-Time Grand National Champ used to contest the Peoria TT with on August 11 that Johnson qualified 2nd with and took to a 12th-place finish in the Grand National main in Thunder Valley.

In the shot above, Johnson and team co-owner Dave Lloyd roll the #5 LBM/Rampur Winery/Foremost Insurance Ducati 1098-based 'L' twin back to the team's pit area after the first practice session at the Springfield Mile II on September 1, 2013 during the Labor Day weekend doubleheader at the Illinois State Fairgrounds. Johnson actually took his first win for the team by taking the win in semi race #1, and going on to finish in the 11th-place spot in the 18-rider National main later in the day. 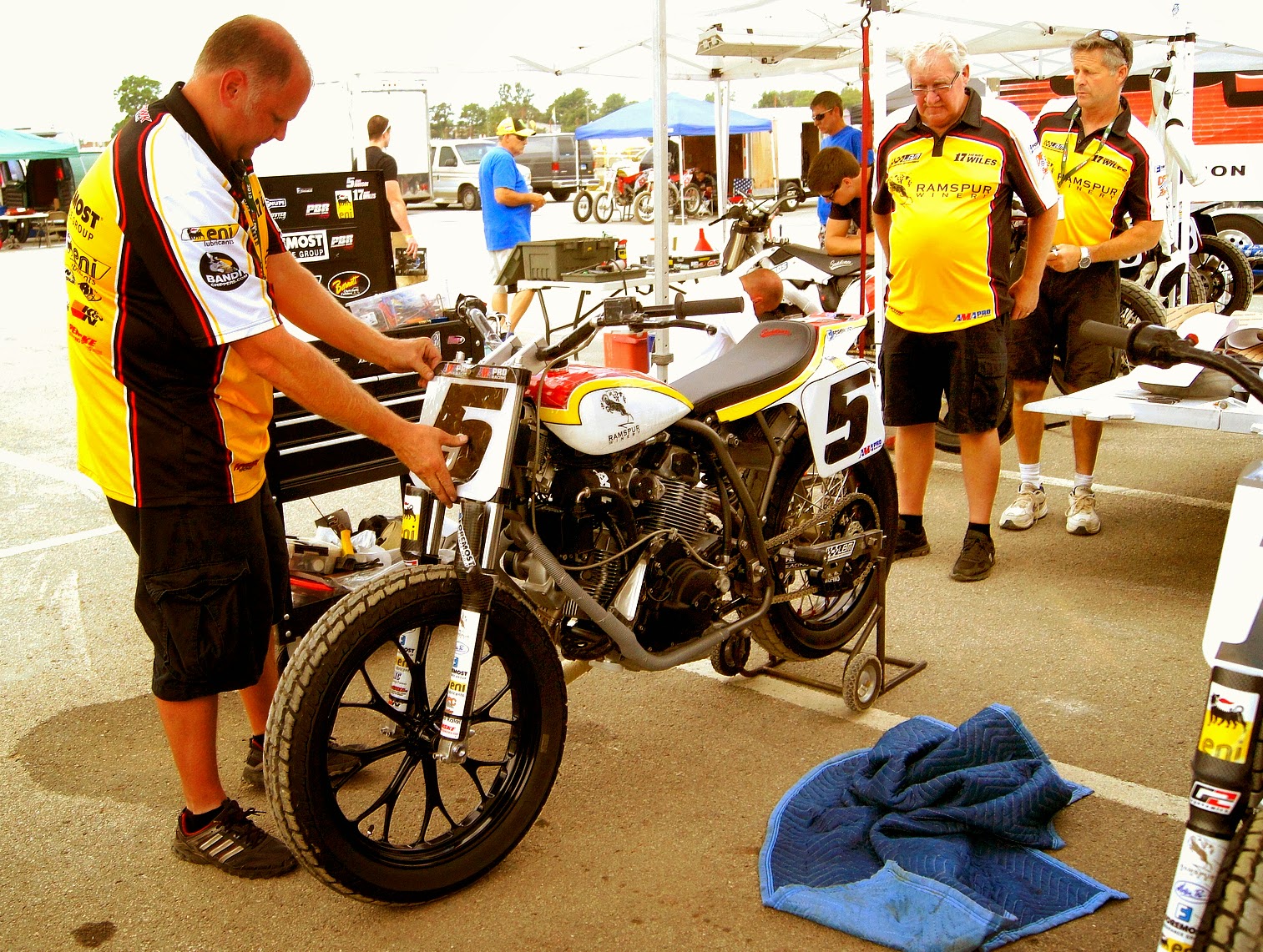 The Lloyd Brothers Motorsports team has been best known for it's efforts to diversify the field with their campaigning of Aprilia and Ducati Italian twins over the course of the better part of the last decade. With rider Larry Pegram at the controls, the team put the first Aprilia-based mount into an AMA Pro Flat Track Grand National main event at the Du Quoin Mile at the final race of the 2004 season, and almost got their first win in AMA Grand National Championship racing with rider Henry Wiles at the Lima Half-Mile in the summer of 2008. Ironically, it was future rider Joe Kopp who nipped Wiles at Lima that fateful night, but just shy of two years later more than made up for it by getting the team's first win at the Prescott, AZ. mile event in May, 2010 on the team's big red Ducati, just nipping Sammy Halbert feet from the checkers.

The team switched gears in late 2012 in terms of crew chiefs after Dave Gamble left the team, and brought in championship-winning wrench and long time friend, Brent Armbruster to do the wrenching on the team's vast stable of big twins. Armbruster literally took over the reigns for Dave and Mike at the season-finale in Pomona in October 2012 and drove the team's transporter back to his home outside Clio, MI. to begin his and the LBM boys' turnaround. Armbruster had just been let go by the Rogers Racing/Jared Mees team and quickly found his footing with a pair of guys whom he had raced with and against for some 20+ years, extending their long time friendships even further by taking over the running of wrenching on the big Italian twins. And according to all three, it's been a match made in heaven as the partnership has been a blessing for all.

In the shot above, Armbruster removes the protective coating over the #5 number plate after just affixing it to one of the Lloyd Brothers/Rampur Winery/Foremost Insurance Group-sponsored Ducatis at the Indy Mile on August 17, 2013, round 8 of the 2013 AMA Pro Flat Track Grand National Championship season. Several minutes later new rider Johnson was spinning laps at the Indiana State Fairgrounds with Armbruster as nervous as could be after initializing the signing of rider Johnson after his split from Zanotti.

Team co-owners Mike and Dave and master wrench Armbruster spent at least one near sleepless night putting together the deal that brought Johnson to the team. Armbruster admitted at Indy he was somewhat nervous and 'may' have bit off more than he could chew in taking on double the workload at the time, but along with his sheepish grin you could tell he was having one heckuva good time doing it!

Also seen in the shot above is team co-owner Mike Lloyd (far right/back, with sunglasses on head) and Parkinson Brothers Racing's Vanderkuur leaning on his championship-winning Honda (black t-shirt) just behind Johnson's Ducati.)

A big thumbs up goes out to the Ohio/Michigan/Georgia/Pennsylvania team as they get ready to contest the 2014 AMA Pro Flat Track Grand National Championship with the help of long time sponsors Ramspur Winery and Foremost Insurance in what will surely be a stellar year for the boys and what will undoubtedly be another super year of racing for fans and friends all around!

You can check out the team's press release below as we begin the three week countdown to the first race of the season at Daytona on March 13 in The Rolling Thunder Show, the greatest racing series on two wheels in the world.

Lloyd Brothers Motorsports, Inc. (LBM) and Parkinson Brothers Racing (PBR) have combined forces with title sponsorship from Ramspur Winery for the 2014 AMA Pro Racing dirt track season. Two-time Grand National Champion, Jake Johnson will be the sole rider and will have the full resources of the team at his disposal with Brent Armbruster continuing as crew chief.

“Our focus is to make sure that the team has every possible advantage to compete at the front of the pack at each race” stated Ramspur Winery’s Nancy Otton. “The stable of motorcycles that the team has assembled to compete this year is impressive including 450 singles, V-twin, L-Twin and parallel- twin cylinder motorcycles” added Terry Otton.
“I joined the team part way through last season and it really feels like home to me” said 2010 and 2011 National Champion, Johnson. “We have a great group of people on the team that are talented, professional and work very well together.  The bikes’ performed very well and I am confident that they capable of running at the front and winning.  I felt very comfortable on the bikes at our last test without the intake restrictors and I am really excited for this season.”
“This is the most talented group of like-minded and hard-working crew and sponsors that we have been able to assemble in several years” said David Lloyd. “We are well prepared for the season and look forward to the fast-approaching Daytona Short Track races.” added Craig Parkinson.
In addition to Ramspur Winery the team is proud to receive support from Motion Pro, Daniel Kalal, Thom Duma Fine Jewelers and Victory Chevrolet. 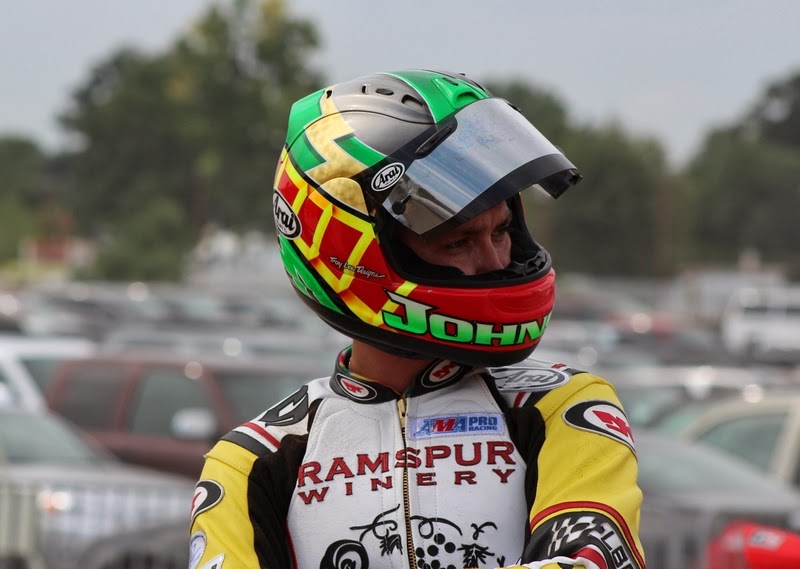 Jake Johnson #5 is shown in his Lloyd Brothers Motorsports gear getting ready to race during the 2013 AMA Pro Flat Track Grand National Championship season. Johnson, who won the AMA Grand National Championship in 2010-2011 while riding for the Zanotti Racing team, joined the Lloyd Brothers Motorsports team at the Indy Mile round of last year's season, and will be the sole rider on the team for the upcoming 2014 season. Photo courtesy of the Lloyd Brothers Motorsports team.
“We are proud of both product and financial participation from our sponsors.  We are very confident in our ability to finish well in each event with the team and quality sponsors that we have assembled.  It is going to be a fun year. ” reported team co-owner Michael Lloyd.
Product sponsors include K&N Engineering, Vortex, Silkolene,  Mr. Sign, Yuasa Battery, BrakeTech, RaceImage, NCR, Saddlemen, RaceTech, Pro 1 Industries, Stauffer Motors, Arai Helmets, Sidi Boots, TLD, Eurosports, Diamond Chain, VMC Racing Frames, CV4,  NJK, Works Connection, RHC, Smith, Xceldyne and Scott Powersports.
To learn more about the team like Lloyd Brothers Motorsports, Parkinson Brother’s Racing and Jake Johnson #5 on facebook.