"Getting the SuperBikes back in the DAYTONA 200 has been a fan request for years and we're thrilled to be making this announcement," said Michael Gentry, Chief Operating Officer of AMA Pro Racing. "The DAYTONA 200 is America's premier motorcycle race, and our goal is to once again feature the biggest names in motorcycle road racing in the event."
The DAYTONA 200 is America's longest-running endurance motorcycle race, tracing its history to 1937 when the inaugural race was run on the sands of Daytona Beach. In 1961, the event became synonymous with Daytona International Speedway and has since seen many great names in motorcycling history win the storied event. Run at the culmination of Daytona Bike Week on Saturday afternoon, the 200-mile race is the only endurance race on the AMA Pro Road Racing schedule, and therefore provides a number of technical challenges. 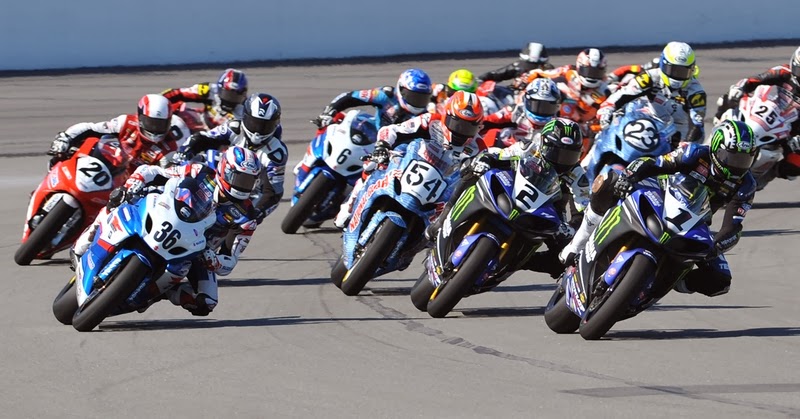 Josh Hayes #1 leads Graves Motorsports Yamaha team mate Josh Herrin #2, Roger Hayden #54 and Martin Cardenas #36 in one of the AMA Pro SuperBike Series events at Daytona in March 2013. In what can only be viewed as great news, AMA Pro Road Racing today announced that the SuperBike class will return to the forefront at the Daytona 200 in March 2015. Photo courtesy of AMA Pro Road Racing by Brian J. Nelson.
The AMA Pro SuperBike class competed in the DAYTONA 200 from 1985 until 2004. Since 2005, the smaller-displacement motorcycles of Formula Xtreme and GoPro Daytona SportBike have campaigned the prestigious event. With the 2015 return of the AMA Pro SuperBikes for the 74th running of the DAYTONA 200, the top teams and riders will again headline the historic event.
"The DAYTONA 200 boasts a long and prestigious history since it first ran on the sands of Daytona Beach over seven decades ago, crowning some of the true legends of motorcycle racing in that time," said Daytona International Speedway President Joie Chitwood.  "Our fans have been patiently waiting for the premier class to return to the weekend's headline event.  We are thankful to AMA Pro Racing, as well as Dunlop and the OEM's for working together to help make this move a reality for 2015."
The adjustments to the AMA Pro SuperBike rules package, planned as part of the recently-announced AMA Pro Road Racing class restructuring, are a key component to getting the SuperBikes back in the DAYTONA 200 for the 2015 running. Another important element is the commitment of AMA Pro Road Racing's spec tire partner Dunlop to the continual development of tires which are specifically suited to the special demands of Daytona International Speedway.
"Dunlop is excited about the prospect of having SuperBikes back in the DAYTONA 200," said Mike Buckley, Vice President of Dunlop. "Everyone on the Dunlop design and service team are enthusiasts first and foremost so the entire team is looking forward to supporting this endeavor."
The 2014 AMA Pro Road Racing season will kick off once again at Daytona International Speedway. The event is scheduled for March 13 - 15, 2014 and will have the same three-day format featured in recent years, highlighted by the 73rd running of the DAYTONA 200 on Saturday afternoon.  For tickets and information, please visit http://www.daytonainternationalspeedway.com.
Keith McCarty, Yamaha Motor Corporation, U.S.A., Motorsports Racing Division Manager: "The DAYTONA 200 is an iconic event, and it's only fitting that SuperBikes--AMA Pro Road Racing's premier class--should be the bikes that compete in the 200. Over the years, Yamaha riders have won the prestigious DAYTONA 200 a total of 22 times, on everything from our two-stroke production racers and Formula 1 GP bikes, to our four-stroke middleweight machines like the YZF-R6 and SuperBikes like the FZ750, OW01, and YZF750R. As the 'Great American Motorcycle Race' approaches its 75th consecutive year of competition, we at Yamaha are excited that SuperBikes will be returning to their rightful place in the DAYTONA 200 next year."
Pat Alexander, American Suzuki Motor Corporation, Sports Promotion Manager: "American Suzuki Motor Corporation is looking forward to returning to compete in the Daytona 200 on the Suzuki GSX-R1000. We see great potential in returning to the 1000cc racing platform for the DAYTONA 200 and we're looking forward to trying to make that win happen."
Don Sakakura, Yoshimura R&D of America, Inc., Vice President: "In years past, Yoshimura and Suzuki have been very successful racing the historic DAYTONA 200 event. We're very excited to hear the 2015 DAYTONA 200 will feature the 1000cc SuperBikes. We anticipate our Yoshimura / Suzukis will be very competitive in the 200 mile format."
Erik Buell, EBR, Founder: "I was very excited to hear that the DAYTONA 200 will be returning to the premier class format it had for so many years. Years ago, one of my great aspirations as a racer was to reach the highest status so I could race in this legendary event. To have the DAYTONA 200 back in the original format is both the right tribute to the past and a proper recognition of the technology of today where modern tires and sophisticated electronics can allow top riders to harness the tremendous power of the machines."
Josh Hayes, Three-Time AMA Pro SuperBike Champion and Rider of the No. 4 Monster Energy Graves Yamaha YZF-R1: "The DAYTONA 200 is our biggest race of the season, so the biggest and best bikes should be competing in it. And, of course, that's the SuperBikes. I'm looking forward to the 2015 DAYTONA 200, when SuperBikes will make their return. I say, 'Welcome back!'"
Roger Lee Hayden, Rider of the No. 95 Yoshimura Racing Suzuki GSX-R1000: "I'm really excited for the SuperBikes to be back in the DAYTONA 200. It's the biggest race of the year and it seems only fitting for the biggest class in AMA Pro to be competing in it. I grew up watching the DAYTONA 200 and it was always the SuperBike guys I looked up to that were winning it, so it's been my childhood dream to win the race. Hopefully this will also bring some international riders over like it has in the past. I can't wait and I think it's a great idea."
Larry Pegram, Rider of the No. 72 Foremost Insurance Pegram Racing EBR 1190RS: "I'm glad that the DAYTONA 200 is on the road back to the being biggest race in the world again. The first step is getting the big bikes back in the race."
Scott Russell, Five-Time Winner of the DAYTONA 200: "As a former winner of the biggest motorcycle race in America, I'm happy to hear that the SuperBikes will be back in the DAYTONA 200. It'll create more interest when we have all of the top riders back in the big race at Daytona. I think this is an extremely important move, and it makes me very happy."
About AMA Pro Road Racing: AMA Pro Road Racing is the premier motorcycle road racing series in North America and is universally regarded as one of the most competitive road racing organizations in the world. The 2012 schedule consists of 12 rounds of competition on the country's finest road courses. Learn more about AMA Pro Road Racing at www.amaproracing.com/rr/.