As was announced today in Daytona Beach, AMA Pro Racing is stepping up their efforts to bring more sponsorship to AMA Pro Flat Track by signing Warren, Ohio's Thom Duma Fine Jewelers as the official jeweler of the 2014 AMA Pro Flat Track Grand National Championship. The signing will see the 2014 AMA Grand National Champion earn a Rolex Daytona Cosmograph watch for his/her efforts in winning the overall championship at the end of the 16-race season.

With a lack of a title sponsor for the 2013 season, this effort in bringing in it's first top line quality sponsor for the upcoming season can only be viewed as a major plus for The Rolling Thunder Show, and shows the efforts that are being put forth by the folks on Fentress Blvd. in Daytona are going all out to try and help turn the state of the sport in terms of sponsorship dollars around for the new year.

With just 29 days left until the season kicks off in Daytona Beach on March 13-14, it's great to see that the powers that be in Florida are still working hard to try and bring in more sponsorship to the greatest racing show in the world on two wheels, and we applaud them for making this happen!

In the shot above, heat race action roars off the line in heat race #1 in round 12 of the 2012 AMA Pro Flat Track Grand National Championship season at the Springfield Short Track. Jake Mataya on the #29 Donahue Sports Center Kawasaki KX450F, Cory Texter on his #65 Engelhart R&T Honda CRF450R, Rob Pearson on the #27 Memphis Shades Yamaha YZ450F, JD Beach on the #95 Burnett Farms Kawasaki, Brandon Robinson on the #44 Action Motorsports Honda and Jake Johnson on the #1 Zanotti Racing Honda roar off the line in what was the last National event at the Illinois State Fairgrounds Multipurpose Arena on September 15, 2012.

A big tip of the helmet to AMA Pro Racing for today's announcement as we all get ready for this longggggggggggggg, coldddddddddddddddddd winter to get over with in the Midwest and get ready for the action to hit the track and the wheels to start spinning again in The Rolling Thunder Show come next month. You can check out the full press release below from AMA Pro Racing as we work on getting the cold out and moving the racing forward in the next few weeks!

DAYTONA BEACH, Fla. (February 12, 2014) - AMA Pro Racing and Thom Duma Fine Jewelers announced today an exclusive agreement naming the jewelry store as the official jeweler of AMA Pro Flat Track for the 2014 season. Thom Duma Fine Jewelers, which is located in Warren, Ohio and has been in operation for more than a century, will award the 2014 AMA Pro Flat Track Grand National Champion a Rolex Daytona Cosmograph valued at over $10,000.

"Thom Duma Fine Jewelers has developed a great reputation for cutting-edge jewelry, and we are very excited to have them as a partner," said Michael Gentry, Chief Operating Officer of AMA Pro Racing. "Several of our riders have longstanding, quality relationships with Thom Duma Fine Jewelers. This new award for the Grand National Champion demonstrates that the company shares our desire to give back to the paddock."
Tommy Duma's inspiration to become the official jeweler of AMA Pro Flat Track came from his days competing in the Grand National Championship from 1976-1981. Duma sported two national numbers throughout his career - No. 62 and No. 26 - and although he is over 30 years removed from competing in the series, he has not lost any love for the sport. 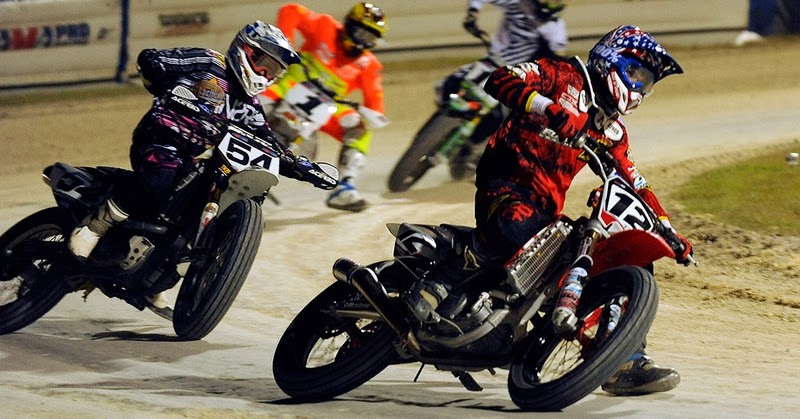 Brad Baker on the #12 Specialty Fabrication Inc. Honda CRF450R leads eventual winner Mikey Rush on the #54 Machete Energy Honda early in round 1 of the 2013 AMA Pro Flat Track Grand National Championship season at the Daytona Short Track I event. AMA Pro Racing today announced the signing of Thom Duma Fine Jewelers as the official jeweler of the 2014 AMA Pro Flat Track Grand National Championship, which will see the 2014 AMA Grand National Champion outfitted with a $10K Rolex Daytona Cosmograph watch for his/her efforts. Photo courtesy of AMA Pro Flat Track by Dave Hoenig.
"I'm aware that several of these riders are at an age where they are thinking about getting engaged and I would like to use this opportunity to establish new relationships with them and maintain the solid relationships that I already have with multiple riders in the series," said Duma. "Just last year, Jared Mees bought his engagement ring and wedding band from me. Henry Wiles also purchased his wedding ring from Thom Duma Fine Jewelers a while back. Being a former competitor in the series, I would like to use this opportunity to give back to the sport that I've grown so fond of."
Duma's love for flat track racing is what inspired him to create a custom jewelry line specifically catered to the flat track community. The line, called Racer Series, contains customized number plates and checkered flag pendants, steel shoe pendants, Pandora style beads for bracelets and much more.
Next up: DAYTONA Flat Track will once again play host to the AMA Pro Flat Track season opener on March 13-14, 2014 as the series kicks off the 2014 season with a doubleheader on the quarter-mile lime rock track located outside Daytona International Speedway's west banking. For tickets and information, please visit http://www.daytonainternationalspeedway.com.
About Thom Duma Fine Jewelers: Thom Duma Jewelers, a family owned and operated jewelry store located in Warren, Ohio has thrived on building relationships within its community and celebrating trust with its customers. As a former racer and current partner of the GNC family, TDFJ CEO Tommy Duma has a special place in his heart for the sport of motorcycle racing, & tries at 'every turn' to give back to the sport. Check them out online at tdfj.com!