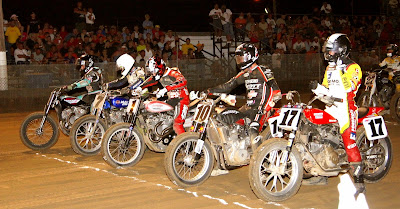 The moment that AMA Pro Flat Track fans have waited for is almost upon us, as in less then 48 hours the riders and teams of The Rolling Thunder Show will take to the Stockton Half-Mile in round 3 of the 2013 AMA Pro Flat Track presented by J&P Cycles Grand National Championship season.

And with the new announcement from yesterday that AMA Pro Flat Track will now be offering Live Streaming Video at each of the remaining 13 rounds of the season, fans should be elated since they will no longer have to rely strictly on AMA Pro Flat Track's Live Timing or even the superb coverage that Miriam Deitcher provides us with her Flat Track Live Page on Facebook.  (Of course there will always be someone in the group that isn't satisfied even with that, but you can't cure everyone, nor please everyone.)

Now fans won't have to wait for the tape-delayed coverage on the cable channel they don't have or don't know they have, and for this we again applaud the powers that be in Daytona of AMA Pro Flat Track for making this wonderful service available to the hard core fans that can't be at each round of the schedule.

But on to round 3 that will take place at the San Joaquin County Fairgrounds in Stockton, California on Saturday, May 11.

This Saturday's race looks to be a another in a long line of great events on the series' schedule this season, with five manufacturers on the pre-entry list including KTM, Triumph, Suzuki, Kawasaki and the long running and hard-to-beat Harley-Davidson XR750 representing the field.

And as we previewed from yesterday the competition is as thick as thieves for anyone to come along and take the first Twins Series events of the season after Mikey Rush and Brandon Robinson led-off the season with the opening-round wins at Daytona back in March.  And as Larry Lawrence previewed in this week's issue of Cycle News, there is going to be a big handful of other riders looking to chase down points leader BRob44 on the TJ Burnett Farms Kawasaki.

A small handful of those riders were also on-hand at round 5 of the 2012 AMA Pro Flat Track Grand National Championship season at the Lima Half-Mile on June 30, as shown in the shot above, and will be gunning for glory again this Saturday.

Bryan Smith on the #42 Moroney's H-D XR will be aboard the Crosley Radio/Howerton Motorsports Kawasaki for the full season, and will be looking to put it back on the podium after his 3rd-place finish at the Pomona Half-Mile season-ender back in October.  Sammy Halbert will roll-out his #7 South East H-D XR750 for his first return to the track after healing-up from his injuries suffered during the off-season.

Jake Johnson and the Zanotti Racing team will replace the #1 plate on their fleet of Ted McDermitt-prepped XRs and put on the #5 that he wore briefly during the 2010 season.  With Johnson's strong will, riding abilities and a super team and big support behind them, keeping that #5 on there could be a brief return for the Pennsylvania rider.  The team is also expected to roll-out their new Kawasaki being prepped at the team's headquarters for the Springfield Mile I round on May 26.

Johnson's brother-in-law Johnny Lewis, having left the Scott Powersports Kawasaki team after last year's Hagerstown Half-Mile, will be in full race mode as he returns to the Twins Series on the #10 Latus Motors Racing Triumph this weekend.  And Henry Wiles will move his #17 number plate over to a new H-D XR750 for this weekend's event that was just announced by the Lloyd Brothers Motorsports team last week.  And Rob Pearson will be aboard the #27 Weirbach Racing team's XR or possibly even their Suzuki this weekend as the Iowa-based team awaits the finish of their new Kawasaki in time for Springfield in just over 16 days.

And that is just a mere sampling of what to look for Saturday, as The Rolling Thunder Show takes the greatest racing series on two wheels in the world to the west coast for round 3 of the 2013 AMA Pro Flat Track presented by J&P Cycles Grand National Championship season in what should be a hot and wild day in Stockton.

Check out what AMA Pro Flat Track has to say in their official press release below, as we get fired up to get this season rolling!


DAYTONA BEACH, Fla. (May 9, 2013) - The stars of AMA Pro Flat Track presented by J&P Cycles head out west for the first of four races scheduled to take place in the Golden State in 2013.  The series' top contenders will give it their all on the Stockton Half-Mile at the San Joaquin County Fairgrounds in Stockton, Calif. this Saturday, May 11.
The AMA Pro Grand National Championship Experts will bring out their thundering twin-cylinder machines for the first time this season and fans will have ample opportunity to witness the true power that they are capable of producing.  This year will mark the first time in AMA Pro history that the series will race the Stockton Half-Mile. 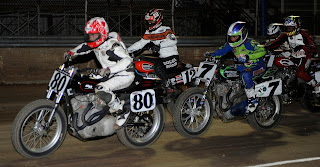 Steve Bonsey #80 leads Brad Baker #12, Sammy Halbert #7, Jake Johnson #1 and the rest of the field as they roar off for the National main event at the Tucson Half-Mile, round 15 of the 2012 AMA Pro Flat Track Grand National Championship season on October 6.  All four of these riders and more will be in attendance looking to take the win when the Twins Series machines hit the track for their first event of the season in round 3 of the 2013 AMA Pro Flat Track presented by J&P Cycles Grand National Championship season this Saturday, May 11 at the Stockton Half-Mile.  AMA Pro Flat Track photo by Dave Hoenig.
Oxford, Pennsylvania product Brandon Robinson (TJ Burnett Farms, USC Racing/Kawasaki KX450F) and Gilroy, California's Mikey Rush (Machete Energy/Honda CRF450R) both came away with surprising victories at the DAYTONA Flat Track when the 2013 season commenced with Rounds 1 and 2 this past March. T he wins happened to be the first for both Robinson and Rush at the Grand National Championship Expert level and both look to build off their momentum with performances similar to those at Daytona.
Defending Grand National Champion and Clio, Michigan native Jared Mees (Montgomeryville Cycle/Honda CRF450R) finds himself in sixth place in the point standings going into Round 3 at Stockton after uncharacteristically finishing 15th in Race 2 at Daytona.  However, Mees is widely considered a favorite this weekend as he has proven that his biggest strengths typically lie on the soil of half-mile tracks.
After competing on Italian branded motorcycles for the last seven years, Winn, Michigan's Henry Wiles (Lloyd Brothers Motorsports) will race a brand new Brent Armbruster-built Harley-Davidson XR 750 for the first time in his illustrious career this weekend at Stockton.
Another well-known AMA Pro racer making recent headlines is Sammy Halbert.  The Graham, Wash. product tore his ACL back in February and was unable to perform in the season's opening rounds at Daytona.  It has been confirmed though that Halbert's knee is healed and ready to go for Stockton and, after finishing second in the Grand National Championship in 2012, there's little reason to believe Halbert doesn't have what it takes to make up the ground lost by missing rounds one and two.
Practice for the Stockton Half-Mile will begin running at 3:30 p.m. local time, with opening ceremonies set to commence at 7:00 p.m.  Fans that are unable to attend the race at Stockton are in luck as the AMA Pro Live streaming video cameras will be turned on and streaming all day long.
One camera will be mounted at the start-finish line with the other camera giving fans a birds-eye-view from the P.A. booth along with an audio feed of official series announcers Scottie Deubler and Barry Boone.  AMA Pro Live can be accessed through a web browser from any computer, tablet or mobile device by navigating to http://www.amaprolive.com.
Riders, both Experts and Pro Singles, will all be gunning for the opportunity to win their respective races in hopes of recording the first ever victory at the facility.  California is known for putting on exceptional AMA Pro Flat Track presented by J&P Cycles events and this particular weekend should be no exception.  For tickets and more information on the Stockton Half-Mile, please visit http://www.showclix.com/events/17007.