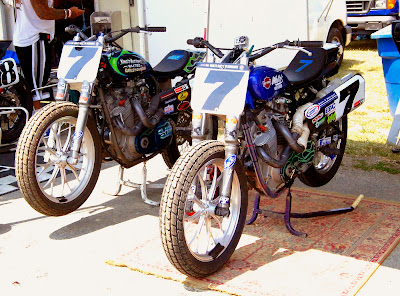 Sammy Halbert made his return to the track Saturday, May 11 and pulled-off the big win after having been laid-up due to off-season injuries suffered earlier in the year, which caused him to miss the season-opening rounds at Daytona in mid-March.  Halbert and 2011 AMA Pro Flat Track Rookie of the Year Brad Baker traded the lead throughout the night's National main until The Slammer took over and lead the last six laps.  The Bullet kept him honest in coming up just .961 seconds behind him at the checkers.

Henry Wiles, in his first ride on the Brent Armbruster-prepped Lloyd Brothers Motorsports XR750 brought it home in the 3rd-place spot, just 2.8 seconds behind Baker.  It looks like the LBM team made a good choice in setting up the XR in order to take advantage of the contingencies that Harley-Davidson is paying out in the Twins Series 11 events this season.

With 2-Time AMA Grand National Champion Jake Johnson bringing the #5 Zanotti Racing XR home in the 4th-place spot, and Rob Pearson in his first Twins ride for the Weirbach Racing team took the team's #27 XR to the 5th-place spot.  Series points leader Brandon Robinson took the #44 TJ Burnett Farms Kawasaki into the 6th-place spot to hold a seven point lead over Baker (55-48) heading into round 4 at Springfield on May 26.

Other notables for round 3 include the very unlikely 16th-place finish of defending 2012 AMA Grand National Champion Jared Mees on the #1 Rogers Racing/Kenny Tolbert-prepped XR after winning heat 2 over Pearson and also taking the five valuable points for winning the Dash for Cash four-lap blaster.  Mikey Martin started the Twins Series season off strong by bringing the #91 Bonneville Performance Triumph home in the 10th-place spot after winning his semi, and Johnny Lewis took the 13th-place spot in his first ride on the #10 Latus Motors Racing Triumph.  Bryan Smith had an off-night on the #42 Crosley Radio/Howerton Motorsports Kawasaki by finishing in the 12th-place spot, and Dapper Dan Ingram fought a handling problem on the #31 Brush/Eaken Racing XR and carded an 18th-place finish after completing just five laps in what was diagnosed as a possible worn-out shock on one of the team's two Dick Ford-owned and George Roeder-prepped XR750s.

In the shot above to go along with this report, Sammy Halbert's #7 South East H-D XR750s sit in his pit area awaiting the first practice session at round 5 of the 2012 AMA Pro Flat Track Grand National Championship season at the Lima Half-Mile on June 30, where the Washington State veteran took home his first Twins Series win of last season.

Full results for round 3 of the 2013 AMA Pro Flat Track presented by J&P Cycles Grand National Championship season at the Stockton Half-Mile can be found here.

Cycle News' Larry Lawrence covered the race with this story from Saturday night's action at the San Joaquin County Fairgrounds.

Henry Wiles gives fans of The Rolling Thunder Show a view of the track before the night's action kicked-off here.

AMA Pro Flat Track's official photographer, Dave Hoenig, took some sweet shots--as always--at Stockton, which you can check out at this link.

You can check out the official press release below, courtesy of AMA Pro Flat Track as the series gets ready to head to the Memorial Day Weekend running of the Springfield Mile I on May 26.

Halbert Proves Knee Not an Issue with Stockton Half-Mile Victory


DAYTONA BEACH, Fla. (May 11, 2013) - Saturday night's AMA Pro Flat Track presented by J&P Cycles Grand National Championship Main Event displayed an old-fashioned dogfight between Sammy Halbert (Graham, Wash.) and Brad Baker. Two of the sport's finest riders went neck and neck for the majority of the race and it was Halbert who pulled away with five laps remaining to clinch his first victory of the young season.

Sammy Halbert on the #7 South East H-D XR and Brad Baker on the #12 Dodge Brothers XR traded the lead several times during the 25-lap National main at the Stockton Half-Mile on Saturday, May 11, with Halbert leading where it counted to score his first win of the season in round 3 of the 2013 AMA Pro Flat Track presented by J&P Cycles Grand National Championship season.  Although Sammy took the win after leading the last six laps, Baker led the most laps for the evening (15) and got the bonus point to add to his series total.  Heading into the 4th round of the season at Springfield on May 26, Baker sits second in the championship hunt to points leader Brandon Robinson.  AMA Pro Flat Track photo by Dave Hoenig.
"It was just an awesome race," said an ecstatic Halbert.  "Coming off my knee surgery, it's been a long road of rehab. I'm still not quite 100% healthy but my bike certainly was 100% perfect tonight.  I want to say thanks to the California crowd who came out and supported me. It's always fun racing in this state.  My team and I really got a good win here and it's definitely something to build off of."
After having missed the 2013 AMA Pro Flat Track presented by J&P Cycles season opening rounds at Daytona back in March due to a knee surgery, Halbert needed a strong performance tonight to help himself make up ground in the point standings.  Starting from pole position, Halbert got the holeshot and the lead but found himself handlebar-to-handlebar with Baker almost immediately.  After flip-flopping leads seemingly almost every other lap, it was Halbert who managed to break loose on the 20th lap and open up his biggest lead of the night, and eventually winning by almost a full second over Baker.
So far in 2013, Baker is no stranger to finishing in second place, as the Dryad, Wash. product has been runner-up in all three main events this season.
The most shocking and disappointing headline of the night was Jared Mees (Clio, Mich.) and his 16th place finish in the main event. After claiming victory in Heat 2 as well as the Dash for Cash, Mees skidded off the groove early on and found himself in dead last for the majority of the race.  The defending Grand National Champion surely had his hopes set a lot higher and will have to rebound in two weeks when the series heads to Springfield, Illi. for the Springfield Mile.
Henry Wiles (Winn, Mich.) started third on the grid and that's exactly where he would finish to secure the final spot on the podium.  Jake Johnson (Coatesville, NJ) and Robert Pearson (Chillicothe, Ill.) would go on to round out the top five.
AMA Pro Grand National Championship Overall Point Standings:
1st - Brandon Robinson 55 points
2nd - Brad Baker 48 points
3rd - Henry Wiles 47 points
4th - Jake Johnson 45 points
5th - Mikey Rush 37 points
AMA Pro J&P Cycles Pro Singles
Wyatt Maguire ripped the lead from Shayna Texter (Willow Street, Penn.) early on and went on to clinch his first career main event victory. Maguire, a Mead, Wash. product, looked sharper than ever Saturday night as he put himself in a completely different area code than his competitors for the majority of the race, winning by more than four full seconds.
"It was definitely tough getting through the field but we ended up changing gears and it helped a lot," said Maguire.  "It feels incredible to pull off my first ever victory here in Stockton. I need to thank my family and all of my sponsors, without them I would never have the opportunity to experience something like this.  I also want to thank the crowd for coming out; it's truly a pleasure racing so close to my hometown."
Though Texter saw her early lead diminish to Maguire early on, the female phenomenon wouldn't go on to surrender any more ground as she cruised to an impressive second place finish.  After a strong 2012 campaign and a very solid start to this season, it's evident that Texter has more than what it takes to hang with the guys in the male-dominated sport.
Perhaps one of the biggest headlines regarding the J&P Cycles Pro Singles Main Event was the strong performance of Kyle Johnson.  The Twin Lakes, Mich. product put himself on the map during Round 1 at Daytona with a surprising win and followed that performance up with a third place finish at the Stockton Half-Mile here tonight, proving he's here to stay and should be considered a top contender in the already talent-heavy class.  Rodney Spencer Jr. (San Martin, Calif.) and Cole Frederickson rounded out the top five as their efforts were valiant but simply not enough to overtake Johnson for the final podium spot.
AMA Pro J&P Cycles Pro Singles Point Standings:
1st - Kyle Johnson 48 points
2nd - Wyatt Maguire 48 points
3rd - Ryan Wells 42 points
4th - Rodney Spencer Jr. 40 points
5th - Jake Constantine 34 points

Next up, the stars of AMA Pro Flat Track presented by J&P Cycles head to Springfield, Illi. for the legendary Springfield Mile on May 26.  Please visit http://www.illinoismda.com/ for tickets and more information.