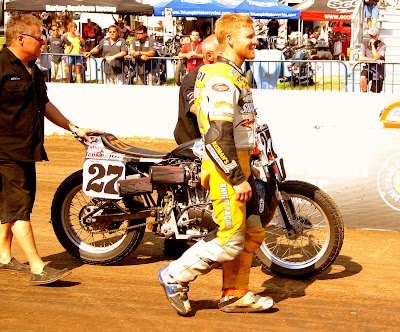 During the off-season late in 2012, Morton, Illinois resident Rob Pearson made the move to the Weirbach Racing team, the 2011 AMA Pro Flat Track Pro Singles Champions with rider Mikey Martin, for the 2013 AMA Pro Flat Track presented by J&P Cycles Grand National Championship season.  Scheduled to ride the team's XR750, Suzuki SV650 and soon-to-be Kawasaki EX650-based Twins Series mounts, the new season ahead was looking to be a big move for the veteran racer.

Moving ahead several months, the team competed in their first Twins Series event together last weekend in round 3 of the 2013 AMA Pro Flat Track presented by J&P Cycles Grand National Championship season at the Stockton Half-Mile on May 11.  Although the team's new Kawasaki wasn't ready yet for action on the small half-mile track at the San Joaquin County Fairgrounds, the team's XR750 was, and Bugs Pearson brought the team's entry home to a very solid 5th-place finish last Saturday night.

Pearson also made the Dash for Cash event, collecting an extra valuable point towards the championship with a 5th-place, after bringing the team's mount home into the 2nd-place spot in heat race #2 behind defending 2012 AMA Grand National Champion Jared Mees.

This is a great start to the season for the Weirbach Racing team and new rider Pearson, and we congratulate them on an outstanding result.  You can read the team's full press release below as they get ready to head to round 4 of the season at the Springfield Mile I round on May 26.

In the shot above, Pearson and the #27 Memphis Shades/Yamaha/Wiseco/K&N-backed team roll their XR750 out for rider intros at round 4 of the 2012 AMA Pro Flat Track Grand National Championship season at the Springfield Mile on May 27.

Well we just made it back to the midwest from the long journey out west.  It
was the first twins Grand National of the year.  The many miles of travel to
Stockton, Ca. ended up to be worth it as we had some good results on the
west coast.

On the way out to Stockton we found out about Chowchilla, CA. running a
3/8's mile on Friday night before the GNC race.  Mike King from KDM Forest
Products supplied the team with a great running 450 Suzuki so we didn't have
to sit out and watch the fun.

The bike worked great and I won my heat.  After a less than great start in the main,
I ended the night second and had a lot of fun.  Thanks again for the ride Mike.

Saturday for the GNC in Stockton was a nice warm day and the
Weirbach/General Engineering Harley was running spot on.  We ended up
qualifying 5th which was good enough for the second starting spot in heat
two. 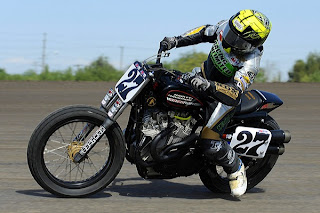 Rob Pearson on the #27 Weirbach Racing/KDM Forest Products-sponsored XR750 is shown during one of the qualifying sessions at the Stockton Half-Mile on May 11.  Photo courtesy of Weirbach Racing by Dave Hoenig/Flat Trak Fotos.com.


I got off the line well and battled with last years Grand National Champion
Jared Mees for the number one spot but had to settle for second.  That was
good enough for the front row of the main and in the dash for cash which is
exactly where we wanted to be.


In the main event I got another good start and put the Harley down low on the blue
groove, but finally found the line was faster just off the rubber and raced with
Jake Johnson and Henry Wiles for most of the race.  We ended up 5th which was
a great start to our twins season.  The new team is jelling well and we have moved
up to tie for 7th in the overall points standings.

I have to thank everyone for the help this year, especially Weirbach Racing and
KDM Forest Products for a great first trip out west.