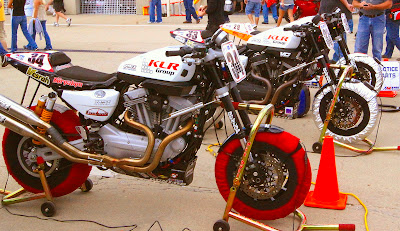 The newly renamed AMA Pro Vance & Hines Harley-Davidson Series heads to it's original roots this weekend as Road America will again host the Geico Motorcycle AMA Pro Road Racing Series and the class that got it's start at the Elkhart Lake, WI. facility as a support card event during the 2010 season.

With the H-D factory just 60 some odd miles down the road in Milwaukee, Road America was the perfect choice to host the series' first event when the powers that be at AMA Pro Road Racing were considering adding a support event to their calendar, and in the form of the spec series based on the Milwaukee iron and alloy that is the XR1200 mount.  In the series first season three years ago, five support events were held in hopes that enough sponsorship and interest would happen to possibly add it to the calendar in the coming seasons.

And enough there was and the rest, as they say, was history as the AMA Pro Vance & Hines XR1200 Series was born and added as a full support event in 2011.  Since it's first year of competition, three men have emerged as champions in what is now a full-blown class that has drawn interests globally from supporters and riders alike.  Danny Eslick (2010), Chris Fillmore (2011) and Michael Barnes (2012) all have one thing in common-they have captured the class championship in that series.  And in it's fourth year, the class has been renamed to the AMA Pro Vance & Hines Harley-Davidson Series, mainly since the H-D factory discontinued producing the XR1200 model in the States for the 2013 season.

In the shot above taken at the Indianapolis Motor Speedway-hosted 5th Annual Red Bull Indy MotoGP round, in which the XR1200-based class has acted as a support race for what will this year be it's third season, the top-ranked bikes in the XR1200 Series sit at the ready for the weekend's first round of practice on Friday, August 17, 2012.

Michael Barnes #34 KLR Group/Spyke's H-D/Vesrah/GK Motorsports-sponsored mount, along with team mate Kyle Wyman's #33 like-sponsored machine both flank Tyler O'Hara's #29 JCR/Scrubblade/Bartel's H-D/RS Taichi-backed XR1200 in the Gasoline Alley staging area at Indy, awaiting their chance on the track to thrill the legions of fans on hand for the weekend's popular activities.  Wyman and O'Hara would split the victories over the weekend, but at the end of the season it was Barnes who would walk away with the #1 prize and championship.

Thanks to AMA Pro Road Racing for the full press release preview of this weekend's event at Road America, which you can check out below.

Road America also holds the distinction of having played host to the class' inaugural race. The contest took place in 2010 and was won by future AMA Pro National Guard SuperBike star Danny Eslick by a scant 0.055-second margin.  The circuit's draft-friendly straights and wide range of corners has reliably produced spectacular racing from the evenly-matched Harley-Davidson XR1200s ever since, with the largest margin of victory being just 0.157 seconds (including the 2011 multi-rider brawl that saw seven riders take the checkered flag within a second of victory).
Last year it looked as if that trend might change after Tyler O'Hara (No. 29 Eco Fuel Saver/ Scrubblade) stormed to pole position with over a second in hand. However, the draft proved to be the equalizer once again, and in the end Kyle Wyman (No. 33 Revolution Performance/Millennium Technologies) emerged victorious, followed by eventual series' champ Michael Barnes (No. 1 Rossmeyer's Harley-Davidson), with O'Hara rounding out the top three.  O'Hara got a measure of revenge on Wyman for that defeat, and on Barnes for narrowly edging him to the '12 crown, at the season opener at Daytona International Speedway this past March. 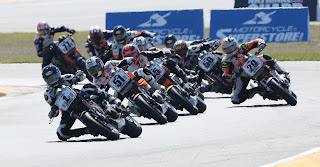 Michael Barnes on the #1 Rossmeyer's H-D XR1200 leads the pack during the opening round of the 2013 AMA Pro Vance & Hines Harley-Davidson Series at Daytona in March.  The newly renamed XR1200 class returns to it's roots at Road America this weekend for round 2 of the season in Elkhart Lake, WI.  AMA Pro Road Racing photo by Brian J. Nelson.
O'Hara followed Wyman's last-lap charge up through field on the banking, ultimately making one final pass to steal the win away from his rival. The Californian will be anxious to continue his early-season roll this weekend in Wisconsin and make up for last year's defeat.
While Wyman finished on the box in the opener on his Revolution Performance/Millennium Technologies Harley-Davidson XR1200, reigning champ Barnes finished an uncharacteristic sixth in what was his first race brandishing the #1 plate on his Rossmeyer's Harley-Davidson. The veteran racer will no doubt be looking to make some amends of his own at Elkhart Lake.  Travis Wyman (No. 24 Harv's Harley-Davidson) pulled off a minor upset by securing pole position at Daytona. He's also fared well on his XR1200 at Road America in the past, finishing fourth last year, third in 2011, and fifth in 2010, and should be considered a threat to finish on the podium once again.
It was a Daytona opener to forget for the talented Suburban Harley-Davidson duo of Steve Rapp (DNF) and Ben Carlson (DQ). The two will be well motivated to fight upfront this weekend, particularly Carlson, who hails from nearby West Bend, Wisconsin.  Former class winner Shane Narbonne (No. 46 Mob Racing) was just a half-second removed from victory at Daytona but still relegated to a seventh-place finish, such is the nature of the ultra-competitive class. The Massachusetts native is yet another potential frontrunner seeking improved fortunes at Road America.
If history is any indication, it's likely to be the same story when the series leaves Road America, as the difference between victory and a result well outside the top five could easily prove to be just fractions of a second yet again.

AMA Pro Live will be live streaming multiple channels of behind-the-scenes video of the weekend's activities alongside Live Timing & Scoring.  AMA Pro Live puts fans in the director's chair, allowing them to choose from a variety of viewpoints including track cameras, paddock cameras and a press conference channel. Streaming will begin with coverage of the weekend's practice and qualifying sessions on Friday, May 31 at 1:00 p.m. ET/10:00 a.m. PT at http://www.amaprolive.com.
All weekend long, stay connected with GEICO Motorcycle AMA Pro Road Racing on social media at http://twitter.com/AMAProSBK and http://www.facebook.com/AMAProRoadRacing.
Tickets for the Subway SuperBike Doubleheader at Road America start at just $20. For more information, please visit http://roadamerica.com/Races/RaceInformation.asp?id=240.
About GEICO Motorcycle AMA Pro Road Racing:
GEICO Motorcycle AMA Pro Road Racing is the premier motorcycle road racing series in North America and is universally regarded as one of the most competitive road racing organizations in the world. The 2012 schedule consists of 12 rounds of competition on the country's finest road courses. The Series is comprised of four production-based classes: AMA Pro National Guard SuperBike, AMA Pro GoPro Daytona SportBike, AMA Pro Motorcycle-Superstore.com SuperSport and the AMA Pro Vance & Hines XR1200 Series. Learn more about GEICO Motorcycle AMA Pro Road Racing at www.amaproracing.com/rr/.
Posted by Stuman714 in Indy at 7:00 PM