ELKHART LAKE, Wis. (May 30, 2013) - The AMA Pro Motorcycle-Superstore.com SuperSport series resumes this weekend as GEICO Motorcycle AMA Pro Road Racing heads to Road America for the Subway SuperBike Doubleheader. This class filled with young riders and fast local talent is known for putting on some of the closest racing in the Series and this year's doubleheader in Elkhart Lake, Wis. is sure to deliver from flag-to-flag.
The Motorcycle-Superstore.com SuperSport class has been designed to foster the growth of the sport's up-and-coming talent by providing a cost-effective platform for riders to compete on the national stage before climbing the ranks of GEICO Motorcycle AMA Pro Road Racing.
Over the offseason, many of the established riders in the class graduated to the GoPro Daytona SportBike division, including the likes of two-time class champion James Rispoli (No. 43 National Guard/Celtic Racing Suzuki GSX-R600), Jake Lewis (No. 85 Meen Motorsports Racing Yamaha YZF-R6) and Elena Myers (No. 21 Castrol Triumph Apex Manufacturing Triumph Daytona 675).
This natural progression up the ranks of the Series has opened up the door for a new cast of characters to set the stage during the 2013 season. The first round of Motorcycle-Superstore.com SuperSport competition this year has easily proven that there is no shortage of talent in the ranks, as the races once again turned out to be wild races with plenty of action at the front.
Stefano Mesa (No. 37 Motosport.com/EBR Yamaha YZF-R6) and Tomas Puerta (No. 12 RoadRace Factory Yamaha YZF-R6) made it a Colombian affair during the season-opening doubleheader in March, splitting the wins in a pair of hotly-contested finals. Mesa narrowly inched out David Sadowski, Jr. (No. 101 Mach Modified Yamaha YZF-R6) in Race 1 while Puerta put his head down during the final laps of Race 2 to take home the victory over Charles Weaver (No. 13 B.P. Racing/Napa Auto Yamaha YZF-R6).  Puerta has returned in 2013 for his second season with the RoadRace Factory/Red Bull team, and the young rider continues to impress with his speed and consistency. Following the Daytona round, Mesa was picked up by a new team formed as a partnership between RSRacecraft and MotoSport.com. Although this weekend will mark his first time out with his new squad, Mesa has reason to head to Elkhart Lake with confidence, having earned his first career victory at Road America just last year.  Despite the recent successes enjoyed by the Colombian duo, the remainder of the 45-rider field that is entered in this weekend's contest will not be content to let these two steal all the accolades. 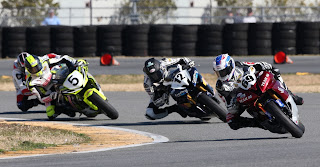 Hayden Gillim #69, Tomas Puerta #12 and Corey Alexander #5 battle during one of the AMA Pro Motorcycle-Superstore.com SuperSport Series races at Daytona in March.  The series resumes action this weekend in Elkhart Lake, WI. at Road America.  AMA Pro Road Racing photo by Brian J. Nelson.
Corey Alexander (No. 5 National Guard/Celtic Racing Suzuki GSX-R600) is one of the many riders in the pack itching for another win and a shot at this year's title. Alexander has seen steady progress since his days in the Red Bull AMA Rookies Cup in 2008. Perhaps the tallest rider currently competing in GEICO Motorcycle AMA Pro Road Racing, Alexander scored a victory in 2011 and saw further progress in 2012, taking home a pole position and consistently improving his qualifying times. His third-place result in Race 2 at Daytona in March shows that his off-season training has kept him on top of his game.  Another rider who knows what it takes to win in Motorcycle-Superstore.com SuperSport is Hayden Gillim (No. 69 Team 95 Yamaha YZF-R6). Gillim dominated races in Utah and New Orleans last year, and the Kentucky product has shown he's got as much natural talent as any rider in the class.  Regional standouts Jeffrey Tigert (No. 91 CM Motorsports Yamaha YZF-R6) and Sebastiao Ferreira (No. 73 B.P. Racing Yamaha YZF-R6) both earned top 10 finishes at Daytona. Ferreira finished in the lead pack and less than .3 seconds from the winner in Race 1, while Tigert turned the fastest laptime in the field in Race 2 on his way to a fourth-place result.
The sons of former AMA Pro National Guard SuperBike pilot David Sadowski both shined at Daytona and will be racing for the win this weekend in Wisconsin as well. Matt Sadowski (No. 100 Mach Modified Yamaha YZF-R6) and David Sadowski, Jr. (No. 101 Mach Modified Yamaha YZF-R6), enjoyed a number of top 10 finishes during the first event of the year, with David's second-place result on Sunday topping what was a great weekend for the family. The Mach Modified Yamaha competitors will look to do it again in Wisconsin.  Another brother duo from a notable racing family can be found in Travis and Cody Wyman. The New Yorkers continue to fight for family honors (along with 2012 AMA Pro Vance & Hines Harley-Davidson Series runner-up Kyle Wyman) on board their Harv's H-D sponsored Suzukis.
With the depth of field in Motorcycle-Superstore.com SuperSport and the thrilling racing that Road America's 4.05-mile natural road course has long been known for, this weekend's Subway SuperBike Doubleheader is shaping up to be one of the most exciting events on the 2013 calendar.
AMA Pro Live will be live streaming multiple channels of behind-the-scenes video of the weekend's activities alongside Live Timing & Scoring.  AMA Pro Live puts fans in the director's chair, allowing them to choose from a variety of viewpoints including track cameras, paddock cameras and a press conference channel. Streaming will begin with coverage of the weekend's practice and qualifying sessions on Friday, May 31 at 1:00 p.m. ET/10:00 a.m. PT at http://www.amaprolive.com.
All weekend long, stay connected with GEICO Motorcycle AMA Pro Road Racing on social media at http://twitter.com/AMAProSBK and http://www.facebook.com/AMAProRoadRacing.
Tickets for the Subway SuperBike Doubleheader at Road America start at just $20. For more information, please visit http://roadamerica.com/Races/RaceInformation.asp?id=240.
About GEICO Motorcycle AMA Pro Road Racing:
GEICO Motorcycle AMA Pro Road Racing is the premier motorcycle road racing series in North America and is universally regarded as one of the most competitive road racing organizations in the world. The 2012 schedule consists of 12 rounds of competition on the country's finest road courses. The Series is comprised of four production-based classes: AMA Pro National Guard SuperBike, AMA Pro GoPro Daytona SportBike, AMA Pro Motorcycle-Superstore.com SuperSport and the AMA Pro Vance & Hines XR1200 Series. Learn more about GEICO Motorcycle AMA Pro Road Racing at www.amaproracing.com/rr/.
Posted by Stuman714 in Indy at 5:00 PM