AMA Pro Flat Track Heads to Springfield Mile I Round 4 of the 2013 Season on Sunday, May 26

Round 4 of the 2013 AMA Pro Flat Track presented by J&P Cycles Grand National Championship heads to the Springfield Mile I Memorial Day Weekend running of the first mile event on the calendar in what should be another great shoot-out at the Illinois State Fairgrounds.

With Brandon Robinson leading the overall point standings after his Daytona Short Track II event win, and finishing in the 5th-place spot at Daytona I and a solid 6th-place finish at round 3 at the Stockton Half-Mile, the TJ Burnett Farms Kawasaki team rider looks to keep atop the standings and also card his first-ever mile event win for his new team in the 2013 season.

2011 AMA Pro Flat Track Saddlemen Rookie of the Year Brad Baker sits in the 2nd-place spot of the overall standings after a stellar start to the season, in spite of his Daytona II disqualification for unapproved forks on his Honda CRF450R.  Baker has finished in the 2nd-place spot in all three races to start the season off on a very strong note, and will be on the Dodge Brothers Racing team's XR750 again this Sunday.

Sitting in the 3rd-place spot in the championship is Henry Wiles, who in all likelihood will be piloting the Lloyd Brothers Motorsports Italian 'L' twin after taking a well-earned 3rd-place finish at the last round in Stockton on the team's new XR.

2010-2011 AMA Grand National Champion Jake Johnson holds down the 4th-place spot in the championship, and was originally expected to roll out the Zanotti Racing Kawasaki at Springfield this Sunday, but word has it that development on the team's new mount is running behind and Dave Zanotti and Ted McDermitt are expected to roll-out the team's powerhouse XRs this weekend.

And rounding out the top-5 is Mikey Rush, winner of the Daytona Short Track I round of the season on March 14, who will be looking to add to his two short track wins while trying to nail down his first-ever Twins Series event win of his career.

The list of folks looking to walk away with the win at Springfield this Sunday is deep, including Bryan Smith on the #42 Crosley Radio/Howerton Motorsports Kawasaki, who won the last go-around at Springfield back on September 16.  Willie McCoy will be looking to add to his two Springfield wins, most recently from the May event last season, and Jared Mees will be looking to make amends after his near get off at the Stockton Half-Mile and to get back into contention for going after another AMA Grand National Championship after taking the crown at Pomona last October.

Add to that list 3-Time AMA Grand National Twins Champion Kenny Coolbeth, Jr., Stockton winner and 2012 runner-up Sammy Halbert,  and Johnny Lewis who will be on the #10 Latus Motors Racing Triumph for his second time out this season.  Of course, the list doesn't end there so you will need to keep glued to AMA Pro Flat Track's Live Timing and Scoring as well as their new addition to online viewing ala their Live Streaming Video--that is if you aren't planning on attending one of The Rolling Thunder Show's best race venues!

So get ready for the best racing on two wheels in the world as The Rolling Thunder Show heads to Springfield for what will surely be a monumental event on this season's calendar!

In the shot above, Brandon Robinson on the #44 Werner-Springsteen Kawasaki leads Willie McCoy on his #59 Harley-Davidson of Wausau XR750, with Jared Mees on the #9 Rogers Racing XR grabbing a share of the draft during heat race action at round 4 of the 2012 AMA Pro Flat Track Grand National Championship season at Springfield on May 27.

Check out the press release below thanks to AMA Pro Flat Track as we get ready to roll into Springfield for some serious mile action this Sunday!

DAYTONA BEACH, Fla. (May 24, 2013) - Ready for action, teams now head to Springfield, Il. and the running of Round 4 of AMA Pro Flat Track presented by J&P Cycles, May 26th at the Illinois State Fairgrounds.
Steeped in history, the famed Springfield Mile is considered one of the fastest miles on the AMA Pro Flat Track presented by J&P Cycles circuit and every rider wants to lay claim to the glory of taking the checkered flag.  Going full bore from start to finish, this spectacular race showcases the best dirt track racers in the world in unparalleled non-stop action.
The long history of two-wheeled racing at Springfield actually began back in 1937 when the first AMA Class C National Championship was held on the Springfield Mile.  In fact, until 1954 if a rider won The Mile he was rewarded the most coveted prize in Dirt Track competition, the National Champion's Number 1 plate.  While this is no longer the case, winning the Springfield mile is one of the most coveted victories in the Grand National Championship. 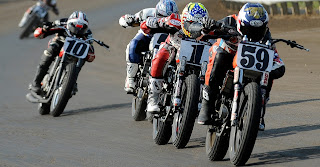 Willie McCoy #59 leads Jake Johnson #1, Jared Mees #9 and Johnny Lewis #10 during round 4 of the 2012 AMA Pro Flat Track Grand National Championship season at the Springfield Mile I on May 27.  AMA Pro Flat Track photo by Dave Hoenig.
Not only does this race pit rider against rider, but it also pits machine against machine. Harley- Davidson, Honda, Aprilia, BMW, Buell, Ducati, Kawasaki, KTM, Suzuki, Triumph and Yamaha all offer AMA approved models and seven of these machines are on the entry list.
With three races down, there have been three different winners: Mike Rush of Hollister, Calif., took top honors at the season opener in Daytona, the second race at Daytona found Brandon Robinson of Oxford, Pa., first on the podium and at the inaugural Stockton Half-Mile, Sammy Halbert of Graham, Wa., took the checkered.
Adding even more for fun and excitement for fans will be a "Race of Legends" hosted by the Ride Academy.  The race will include a number of past Grand National Championship riders who will be on hand to show their support for the Basic Twins class scheduled to return to the series.  Jay Springsteen, Joe Kopp, Tommy Duma, Charlie Roberts, Jackie Mitchell, Tim Mertens, Ronnie Jones, Steve Beattie, Steve Morehead, Mike Hacker, Chris Carr and more will all be on hand to show their talent on two wheels.