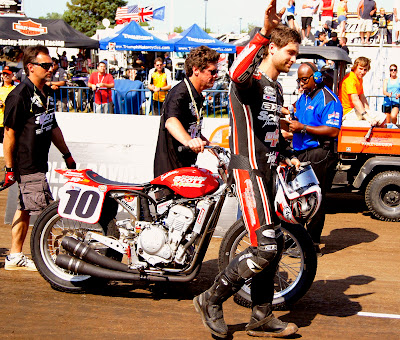 This coming weekend at the Illinois State Fairgrounds, one of the biggest races on the 2013 AMA Pro Flat Track presented by J&P Cycles Grand National Championship season's schedule will roll out as the Springfield Mile I will bring fans to their feet with the stars of The Rolling Thunder Show hitting the track for the first mile event of the season.

'JL10' as he is known to his fans will lead all entrants in this special event in a walk/run for 2 laps around the iconic Springfield Mile oval on Saturday, May 25 to kick off the action-packed weekend over the Memorial Day holiday.  A big handful of other riders, past and present, are also expected to take part, including current overall points leader Brandon Robinson, his TJ Burnett Farms part-time team mate, JD Beach, Brad Baker, and Chris Carr, just to name a few.

So if you are going to be attending the races at the Illinois State Fairgrounds over the weekend, including the Steve Nace All-Star AMA TT race being held at the Multipurpose Arena on Saturday, take time to join in the fun and help a cause that is very worthy and get a chance to hang out with some of the great and fun people associated with the greatest racing series on two wheels in the world.  You'll be sure to 'walk' or 'run' away with a big smile on your face and a good feeling knowing you are helping out a very worthy cause.

In the shot above, Lewis and his former Scott Powersports Kawasaki team roll-out at the Springfield Mile I on May 27, 2012 during rider intros for last season's first mile event.  Lewis can be seen beaming his endearing and always-present smile that fans of the sport have come to know and love from the Pennsylvania resident, which will surely be on-hand during his 2-lap charity event on Saturday.

JL10 to Host Charity Event Day before Springfield Mile
Coatesville, PA - May 21, 2013 - The "Springfield Mile", as it is known to many, has hosted competitive auto racing since 1910, making it one of the oldest speedways in the United States according to Wikipedia.  "Racing history wasn't only made here, it began here! (Illinois State Fairgrounds. Springfield, IL)", states Keares Renewable Energy rider Johnny Lewis.   "And I don't think everyone racing here today realizes the significance of Springfield and the sport of flat track history at this one place, The Springfield Mile".

As this year's 2013 IMDA Springfield Mile approaches in less than a week, Johnny Lewis will not only be racing his first AMA Pro Flat Track Springfield Mile with his all new Latus Motors Racing Triumph race team, he will also be hosting his very first charity event to raise awareness for March of Dimes - "working together for strong, healthier babies".  With the support of the IMDA, TJ Burnett Farms, and Keares Renewable Energy along with Latus Motors Racing Triumph, Johnny will host "The Johnny Lewis 2-Lap Dash for March of Dimes" taking place on the legendary Springfield Mile Saturday, May 25th.

"Yes, we are walking/running around the actual Springfield Mile the day before the fourth round of the AMA Pro Flat Track Championship event", said Lewis.

For this special event, rather than having over 8000 fans in the stands watching the racing, they get to hit the track running right alongside some of their favorite AMA Pro Flat Track racers. The current list of AMA Pro racers to attend includes your current points leader Brandon Robinson, Jake Johnson, Brad Baker, JD Beach, including many Pro Singles racers and even retired AMA Pro Flat Track Champions/race winners such as Chris Carr, Mike Hacker, and Joe Kopp -  to name a few.

Starting the weekend off early to promote the event as well as the cause and supporters, Johnny will be live on the Next Moto Champion Talk Show Thursday night.  Early Friday morning, Johnny will start his day in-studio for an interview with Springfield's Channel 20 ABC News Station, followed by a LIVE On-Air session with Liz Williams from 100.5 WYMG radio station around 7:45 a.m.  This will be followed up with a round of golf with some of Springfield's finest, continuing into the day with a trip to St. John's Children's Hospital, along with two of TJ Burnett Farm's team riders, to visit with and hand out some goodies to some amazing kids.  The day will conclude with the Latus Motors Racing/Keares Renewable Energy Triumph on display for a Meet & Greet at Boone's Saloon in Downtown Springfield, IL., where Johnny will be sharing information on his first ever charity event, along with handing out JL10 posters.

Saturday morning at 9am, the gates will open to enter the turn 3 & 4 tunnel to register/sign-in for "The Johnny Lewis 2-Lap Dash".  A $10 donation is required for basic registration to take part in the walk/run, or you may donate $25 instead and you'll also receive a JL10 March of Dimes event t-shirt! (Limited supply of t-shirts will be on hand).  ALL proceeds from this event will be donated to March of Dimes.  You can pre-register and secure a t-shirt at www.lewis10.com/2lapdash.  The walk/run (2-Lap Dash) will begin at 10 a.m. and will end well before the gates open up for the Springfield TT ALL-Star race at noon.

Register/sign in will be held at the Latus Motors Racing tents along with the Next Moto Champion trailer.

"Thanks to the support of the IMDA, TJ Burnett Farms, Keares Renewable Energy, and the Illinois State Fairgrounds, I will be able to bring a group of people from all over the country together for a wonderful cause.  To me it's about building awareness of what's going on around us and opening our eyes to see what other families are struggling with.  I want to help make a difference in any way I possibly can.", said AMA Pro Flat Track National #10, Johnny Lewis.

The Mansion View Inn & Suites Springfield, IL. is offering  a "JL10" promotion code for a regular double bed room, at a rate of $59 a night. http://www.mansionview.com.  Call to book a room and tell them JL10 sent you! 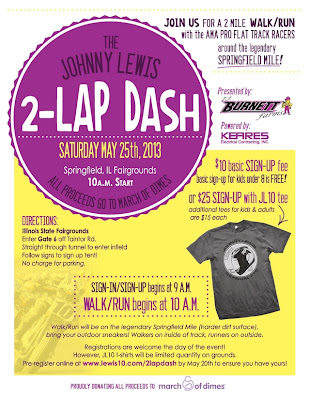 Sign up for The Johnny Lewis 2-Lap Dash @
www.lewis10.com/2lapdash


*****In case of rain the night before/ morning of/ or during the walk scheduled time, we have a loop planned out on the outside of the Springfield Mile on pavement! *****
Got a question? Email @
JohnnyLewis10@live.com 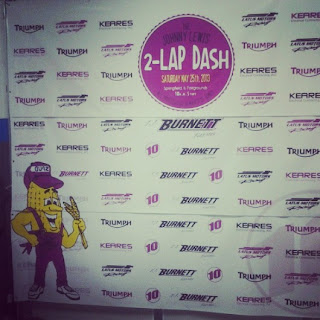