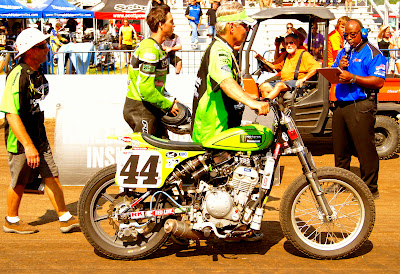 Brandon Robinson and the TJ Burnett Farms/USC/James Hart Racing Kawasaki team fought the good fight throughout the day at round 3 of the 2013 AMA Pro Flat Track presented by J&P Cycles Grand National Championship season at the Stockton Half-Mile on May 11, good enough for a 6th-place finish in the National main, while holding on to the lead in the overall points championship.

The southern Illinois based team worked through adversity throughout the day with bike set-up, gearing and electrical issues on the team's EX650-based Twins Series mounts, and by the end of what was described as a 'very long day' by team owner TJ Burnett, BRob44 had worked his way into the top-6 after getting a poor start in the 25-lap National main held at the San Joaquin County Fairgrounds last Saturday.

With round 4 of the season scheduled for the Springfield Mile I round on May 26, the team is ready to get settled into the meat of the 2013 season ahead. 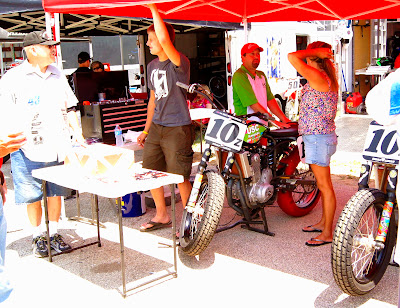 The TJ Burnett Farms/USC/James Hart Racing Kawasaki EX650 Twins Series machines of then-rider Briar Bauman await the action ahead on the track during last season's round 4 at the Springfield Mile I at the Illinois State Fairgrounds, while team crew chief and head wrench, James Hart, talks with one of the team members.

Robinson's part-time team mate, JD Beach #95, will join the team next weekend at round 4 of the 2013 season on May 26.  Bauman is reportedly going to be riding for the Werner team at Springfield after splitting from the TJ Burnett Kawasaki team before mid-season of last year.

You can check out the full press release below from the Brandon Robinson TJ Burnett Farms Kawasaki team as we await one of the biggest racing weekend's in The Rolling Thunder Show on Memorial Day Sunday, May 26.


Round 3 of the 2013 AMA Pro Flat Track presented by J&P Cycles Grand National Championship season is in the record books, and the TJ Burnett Farms Kawasaki team with rider Brandon Robinson pulled-out all the stops to bring home a hard-earned 6th place finish at the San Joaquin County Fairgrounds-hosted event on May 11 for the first west coast event of the young season.


After a 5th-place finish and a win at the season-opening rounds of the season at the Daytona Short Track events, the first Twins Series event of the year proved to be a struggle that the TJ Burnett Farms team and rider Robinson handled with grace—or maybe that would be grease.


“The team worked really hard to get the bikes sorted out for me for the day,” stated Brandon, “as we had a fuel pump go out on us on the back-up bike, and we ended up having to do a lot of work on the 'A' bike to get it right for the National. I really have to thank the team, TJ, James Hart and Billy Gruwell for working so hard to get a set-up that we could use that would work for the track.


“We were kind of awful to start with and it made for a long day, and we got things much better by the time the 25-lap National main came around, “ continued Brandon.


Asked if he has been out in the fields helping team owner TJ Burnett getting his corn planted this week behind the wheel of one of the Burnett Farms big John Deere tractors, Robinson laughed and said, “I don't think he trusts me that much, unless it's on two wheels!


“We're all worn out after the long haul back, especially TJ, who did about 90% of the driving. We made it back to southern Illinois (the team's HQ) in about 32-34 hours, but I think TJ is 'jet-lagged' from all the driving—ha!,” said Robinson.

Brandon Robinson's #44 TJ Burnett Farms/USC/James Hart Racing Kawasaki EX650 Twins Series machines sit in the pits at the Stockton Half-Mile on May 11. “Holy cow, at one point during the day, we had all three bikes torn apart trying to get things right for Brandon,” stated team owner Burnett. Photo courtesy of Tom Stein/Northwest Track Shots on Facebook.

“We mistakenly left the fuel pump running in the pit area on one of the bikes for about 15 minutes,” according to team owner TJ Burnett, “and that really cost us. James Hart and I were working our tails off to get things set-up for Brandon. Earlier we'd had a slight electrical problem we had to get taken care of (diagnosed as a faulty switch) and then the fuel pump problem. Wow, for awhile I wasn't sure if we were going to be able to get things ready in time.


“I have to hand it to Brandon, though, when it came time to race, he took us from the outhouse to the penthouse. He came off of turn 2 in the National in about 17th place (out of the 18 riders that qualified for the main) and he worked his way up to 6th place after the 25-lap main. He did a heckuva job for us,” continued Burnett, “especially as bunched-up as the field got after Jared Mees' near get-off. He did a super job of not crashing the Rogers Racing XR750, and it's something like that that shows you why he's the defending champion.


“We've got all new parts ordered and we'll be ready for Springfield next weekend. It was just an overlooked item on our part with the fuel pump switch. We won't let that happen again, “ stated Burnett.


“We signed a couple of new sponsors since our last race, “ stated Robinson. “Next Moto Champion and Matrix Race Products will be coming on board as of Springfield on May 26.”


Team owner and southern Illinois resident Burnett added, “We're scheduled to meet Next Moto Champion in Springfield next Thursday (May 23). They're helping us out with lettering, graphics and some additions to our tents in the pits. Matrix Race Products has helped us out with some new tool boxes and some race mats for our pit area, which will bring a nice, new shiny look to our pit area.”


After returning to the team's base, they went to work unloading all of the bikes and then loading up for this weekend's Steve Nace All-Star round in Little Rock, AR. This weekend's short track at the I-30 Speedway will see Brandon and team mate JD Beach #95 racing together again for the first time since the season openers in Georgia and Florida, but this time on the team's Singles machines, the TJ Burnett Farms/USC/James Hart Racing Kawasaki KX450Fs. Beach will also be contesting round 4 of the 2013 AMA Pro Flat Track presented by J&P Cycles Grand National Championship season at the Springfield Mile I on May 26 on the team's Kawasaki EX650-based Twins mounts.
“We're all ready for Little Rock and it will be good to have JD along again in helping with the set-up on the bikes at Springfield, too, so that should make for a great event, “ continued Robinson, “we worked well together during the off-season and at the events leading up to Daytona.” 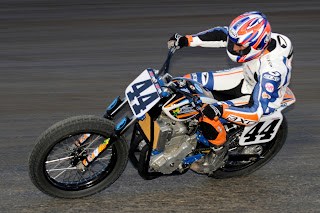 Brandon Robinson on the #44 TJ Burnett Farms/USC/James Hart Racing Kawasaki EX650 Twins Series mount is shown in action at round 3 of the 2013 AMA Pro Flat Track presented by J&P Cycles Grand National Championship season at the Stockton Half-Mile on Saturday, May 11. Photo courtesy of Dave Hoenig/Flat Trak Fotos.com.
“I'd like to see us end up 1-2 at Springfield on Sunday, May 26, but I'm gonna let Brandon and JD work that out, as long as they don't wreck our equipment—ha,” stated Burnett in closing.


With Brandon's 6th-place finish on Saturday night, the team still holds the lead in the overall standings of the 2013 AMA Pro Flat Track presented by J&P Cycles Grand National Championship season with 55 points, seven points over 2nd-place in the championship hunt, Dodge Brothers Racing's Brad Baker (55-48) and Lloyd Brothers Motorsports' Henry Wiles in the 3rd-place spot (47 points) heading into round 4 of the season at the Springfield Mile I event over the Memorial Day Weekend on May 26. 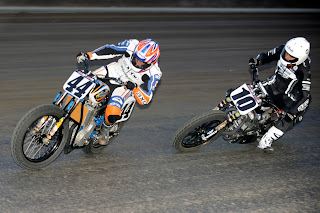 Brandon Robinson on the #44 TJ Burnett Farms Kawasaki leads fellow Pennsylvania resident Johnny Lewis on the #10 Latus Motors Racing Triumph during their battle in heat race #2 at the Stockton Half-Mile on Saturday, May 11. Lewis got the better of Brob44 in the heat with a 3rd-place finish to Brandon's 4th-place, but Robinson brought the Kawasaki home in the 6th-place spot in the 25-lap National main, while Lewis took home a 13th-place finish in the 18-rider National main event. Photo courtesy of Dave Hoenig/Flat Trak Fotos.com.

Unfortunately, the Steve Nace All-Star event originally scheduled to run in Little Rock, AR., has been canceled due to rain for this Saturday, May 18, so the team will take a needed rest before Springfield.


Please make sure when you attend any upcoming rounds of the races to come by and meet and greet the team during each event's fan walk, as we want to make sure that we can talk to as many fans as possible to show each and every one what we are doing and how much we appreciate their support of flat track racing.