ELKHART LAKE, Wis. (May 29, 2013) - Following a short break after the season-opening DAYTONA 200, the AMA Pro GoPro Daytona SportBike field heads to Road America this weekend to charge up the championship chase and get the 2013 GEICO Motorcycle AMA Pro RoadRacingseason underway in earnest. With races scheduled for both Saturday and Sunday afternoons, the GoPro Daytona SportBike action promises to heat up the Wisconsin countryside just in time for summer.  Featuring one of the most iconic layouts on the tour, Road America is a favorite track for seemingly all of the riders. Long straights, hard braking zones and technical sections all challenge the competitors to find their spots to make (and defend) moves. On Road America's legendary 4.05-mile circuit, very few positions are ever held for very long and the margin of victory is typically measured in milliseconds.
The middleweight GoPro Daytona SportBike class is particularly entertaining for the large crowds that come to enjoy the sound of motorcycles and the smell of grilling bratwursts in the beautiful Wisconsin outdoors. Turns five and 11 are the hotspots for wild action in all GEICO Motorcycle AMA Pro Road Racing classes, but particularly for the GoPro Daytona SportBike division, where the drafting battle to get to the front results in dozens of lead changes lap after lap.
In the kick-off round for the Series at Daytona International Speedway, Cameron Beaubier (No. 6 Yamaha Extended Services Monster Energy Graves Yamaha YZF-R6) impressed, winning the historic endurance race in dominating fashion. The young star will look to switch gears and continue that momentum in Wisconsin where the event weekend returns to the typical doubleheader sprint race format. Charged with bringing home an elusive GoPro Daytona SportBike title for Yamaha, Beaubier would no doubt like to leave Elkhart Lake with another win or two tallied up on the point standings.   One rider looking for a better weekend this time out is Dane Westby (No. 5 GEICO Motorcycle Road Racing Honda CBR600RR). The Oklahoman had a get-off in the chicane at Daytona during qualifying, and what initially looked to be a light tip-over resulted in an injury that forced the title contender to miss the 200-mile race. Fully recovered, Westby will be in an aggressive mood with his focus on making up points on the field this time out.  Garrett Gerloff (No. 8 Yamaha Extended Service/Monster Energy/Graves Yamaha YZF-R6) hasn't raced with the Series at Road America before, but a second place in Round 1 has certainly shown that he has the potential to do well in the class. Gerloff will be challenged to piece together how to go fast at a new track, an issue he'll face throughout 2013. If Daytona is any indication however, he's up to the task. 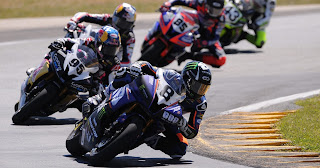 Garrett Gerloff #8 leads JD Beach #95 in route to winning the Daytona 200 in March 2013.  The AMA Pro GoPro Daytona SportBike Series resumes action this weekend in Elkhart Lake, WI. as the Geico Motorcycle AMA Pro Road Racing Series returns to Road America over the May 31-June 2 weekend.  AMA Pro Road Racing photo by Brian J. Nelson.
Two more young riders in the spotlight are Jake Gagne (No 32. RoadRace Factory Yamaha YZF-R6) and JD Beach (No. 95 RoadRace Factory Yamaha YZF-R6). The duo finished fourth and fifth in the DAYTONA 200. Gagne closed the season strong in 2012 with a win and a pole, and the Californian has become one of the top riders in the class. Beach's smooth riding style and strong racecraft will make him a notable contender in Wisconsin.  Road America hasn't always been kind to Jason DiSalvo (No. 40 Latus Motors Racing Triumph Daytona 675R), but the veteran is due for a breakout event. DiSalvo is still as aggressive as ever and has shown that he can dominate a weekend like few others can in GoPro Daytona SportBike. Aboard his three-cylinder Triumph, DiSalvo's progress is sure to mark Triumph's competitiveness on a difficult course.  Also expected to represent Triumph this weekend is Bobby Fong. Fong earned a third-place finish in Round 1, and the former class winner should be riding high going into the Elkhart Lake round as he continues his championship chase on a Triumph Daytona 675.
GoPro Dayona SportBike boasts a strong field of young riders to complement seasoned veterans like DiSalvo, and James Rispoli (No. 43 National Guard/Celtic Racing Suzuki GSX-R600) is one of them, The two-time AMA Pro Motorcycle-Superstore.com SuperSport champ moved up to GoPro Daytona SportBike for the 2013 season and clocked in with a solid seventh at Daytona, topping fellow upstart racer Ben Young (No. 86 Ben Young Racing Yamaha YZF-R6) in the process. Rispoli has a good degree of experience on Suzuki GSX-R600s, so his learning curve in 2013 should be amenable to good results.  Huntley Nash (No. 75 LTD Racing Yamaha YZF-R6) had his best weekend of the year in Elkhart Lake last season, running near the front in GoPro Daytona SportBike and posting his career-best finish of seventh in Race 2. The former Motorcycle-Superstore.com SuperSport race winner will face a different challenge this time around as he performs double duty. In addition to competing in GoPro Daytona SportBike at Road America, Nash will also make his National Guard SuperBike debut aboard the No. 75 Neyra Racing Kawasaki ZX-10.
Two young guns looking to rebound from DNFs at Daytona are Benny Solis (No. 3 M4 Broaster Chicken Racing Honda CBR600RR) and Jake Lewis (No. 85 Meen Motorsports Racing Yamaha YZF-R6.)  An entertaining plot in the Daytona event was the race for the record of highest female finisher in the 72-year history of the event. Elena Myers (No. 21 Castrol Triumph Apex Manufacturing Triumph Daytona 675) and Melissa Paris (No. 13 MPH Racing Honda CBR600RR) had a race-long battle that ended with Myers finishing just one position in front of Paris to take the honors with a ninth-place result. Myers will return to Road America with a new team, but the same top-notch crew members, aboard a 2013 Triumph Daytona 675.  Another talented rider making a return to the GoPro Daytona SportBike ranks is 2012 AMA Pro Vance & Hines Harley-Davidson Series runner-up Kyle Wyman (No. 33 Kyle Wyman Racing Triumph Daytona 675). The New Yorker won last year's Vance & Hines Harley-Davidson Series race at Road America during his stellar 2012 season. This weekend will mark his first start in the GoPro Daytona SportBike division since 2011 and his first time racing with the class in Elkhart Lake.
This weekend will mark the debut of GEICO Motorcycle AMA Pro Road Racing's television broadcasts on CBS Sports Network as part of the CBS Sports Spectacular. This weekend's coverage includes same-day delayed broadcasts of both AMA Pro GoPro Daytona SportBike races, and will begin Saturday, June 1 at 2:30 p.m. ET/11:30 a.m. PT with an all-new weekend Preview Show. Coverage of GoPro Daytona SportBike Race 1 will follow the Preview Show on Saturday, June 1 at 3:00 p.m. ET/12:00 noon PT with Race 2 scheduled for Sunday, June 2 at 3:00 p.m. ET/12:00 p.m. PT. Fans can find CBS Sports Network on their TV by using the channel finder at http://www.cbssportsnetwork.com/channel-finder.
In addition to the live broadcasts on CBS Sports Network, AMA Pro Live will be live streaming multiple channels of behind-the-scenes video of the weekend's activities alongside Live Timing & Scoring. AMA Pro Live puts fans in the director's chair, allowing them to choose from a variety of viewpoints including track cameras, paddock cameras and a press conference channel. Streaming will begin with coverage of the weekend's practice and qualifying sessions on Friday, May 31 at 1:00 p.m. ET/10:00 a.m. PT at http://www.amaprolive.com.
All weekend long, stay connected with GEICO Motorcycle AMA Pro Road Racing on social media at http://twitter.com/AMAProSBK and http://www.facebook.com/AMAProRoadRacing.
Tickets for the Subway SuperBike Doubleheader at Road America start at just $20. For more information, please visit http://roadamerica.com/Races/RaceInformation.asp?id=240.
About GEICO Motorcycle AMA Pro Road Racing:
GEICO Motorcycle AMA Pro Road Racing is the premier motorcycle road racing series in North America and is universally regarded as one of the most competitive road racing organizations in the world. The 2012 schedule consists of 12 rounds of competition on the country's finest road courses. The Series is comprised of four production-based classes: AMA Pro National Guard SuperBike, AMA Pro GoPro Daytona SportBike, AMA Pro Motorcycle-Superstore.com SuperSport and the AMA Pro Vance & Hines XR1200 Series. Learn more about GEICO Motorcycle AMA Pro Road Racing at www.amaproracing.com/rr/.
Posted by Stuman714 in Indy at 5:30 PM