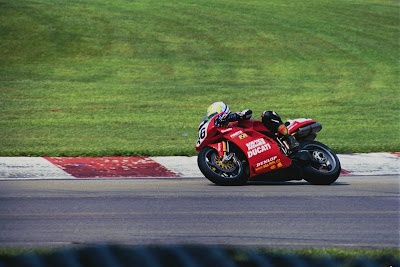 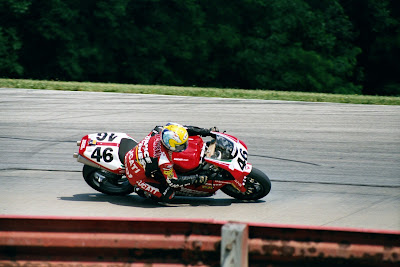 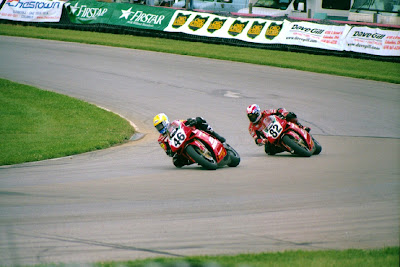 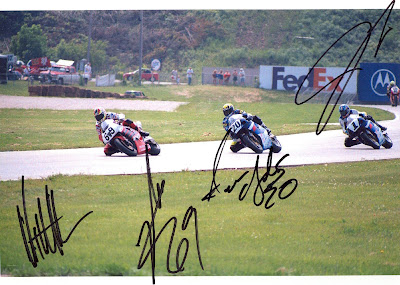 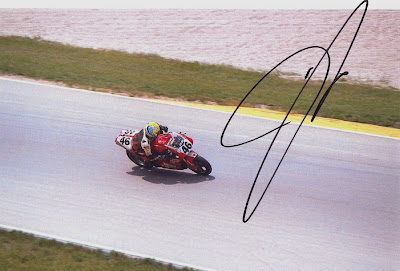 One of the interesting things about motorcycle racers is that during their 'off time'
they have a tendency to gravitate towards the same type of adrenaline pumping, fast
paced type of extra-curricular activity. Case in point today is Mr. John Kocinski, the
'87-89 AMA 250GP Champion, '90 250GP World Champion, and among other things
the '97 World Superbike Champion.
John hadn't, per any internet or news-related items, done any type of motorcycle racing
since late 2000 or early 2001 for the most part. Nothing that I had heard about mind you.
So at least suffice to say that it has been a little while. Last weekend, he showed up with a
self-built Wood Rotax motor packed into an IMMACULATE rolling chassis--NO idea what the
frame is but check it out--SWEET--and won his heat race to qualify for the main in one
of the classes to come home in 11th overall. Which was apparently met with some VERY
talented racers. So it wasn't like he was cherry picking. The man digs flat track, still after
all these years on the raw edge of a 200mph, 350 lb. +/- rocket that produces close to or
a tad over 200hp, well, you get my drift, and shows up at a flat track national just to have
some fun and get a chance to race what he likes and develop a design that he has nutured in
the process. And does pretty damn well if you ask me.....and even if you don't......
We all have to take the time here to thank several sites and the work of their people for
compiling the info and pics from the event last weekend in Pomona, CA. The pictures on
all of the sites were MOST excellent of Johnny K's equipment and the info provided is
class A plus! So that being said while you are reading the following links take time to thank
http://www.cyclenews.com/, http://www.superbikeplanet.com/, http://pwheelie.blogspot.com/, and
last but certainly not least http://sideburnmag.blogspot.com/ for their help and efforts.
They are VERY appreciated, especially those of us that weren't there to marvel in such a
great competitor, guy, racer and spirited enthusiast in John Kocinski. Cool stuff.
And thanks to John Kocinski for being a great racer over the years and putting something
like this together. I commend you and salute you and your efforts and wisdom! Friggin
sweet!
And while you are checking out the info provided by the aforementioned great folks above,
you can also check out the stuff I put up of some shots of some great racing action involving
the ALSO aforementioned Mr. John Kocinski during the 2000 AMA Road Racing season.
We were able to hit Road America in June that year and Mid Ohio about 6 weeks later towards
the end of July and I was able to put together a few shots of Johnny K. Being as how he has
been one of my personal fav racers over the years, and finally getting to see him race that
year back in America again, and not to mention being on a Vance and Hines Ducati to boot,
while, I was livin' life and took a few extra of him that w/e which you are checking out.
In no particular order, the shot of John looking over his shoulder was taken as they come
out of the carosel at RA during practice, and the shot of him bringing up the rear at the end
of the first lap in Superbike Race 2 on Sunday is as well from RA. Leading in that shot
on the #69 Team Honda RC-51 is Nicky Hayden, with the #1 Suzuki GSXR-750 Team
Yoshimura's Mat Mladin and Aaron Yates his team mate on the #20.
The other shots were later that summer at Mid O of John in various sessions of
practice and qualifying that w/e, and the other shot of John leading Steve Rapp
on another Vance and Hines Ducati during the action of Superbike Race 2 that
w/e.
Enjoy and we still have the season ending MotoGP race next w/e to get us
through the winter break. Thanks again for coming by and have a great week!