A Tip of the Helmet to Florida Steve at 2 Stroke Biker Blog and Motorcycle Picture of the Day.... 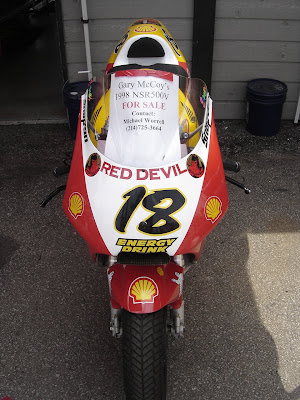 I want to take the time to thank my good man and fellow motorcycle addict Florida Steve Ducharme for taking the time to post a few of my shots again on his sites http://2strokebiker.blogspot.com/ and http://motorcyclepictureoftheday.blogspot.com/
yesterday.
Steve runs two super-sano sites that offer the ultimate in motorcycle goodies
for those of us that like to check a wide spectrum of stuff out and I guarantee when you
look at his stuff, you WILL want to come back. Steve you are the man, and again my hat
is off to you for your work and efforts in taking the time to show off not only my stuff, but
a boat load of other great shit, as well. Thanks dude! And here are the links that Steve posted
of the rad scooter above:


Just so you have a little background on the bike in the shot here today, Garry McCoy is an
Australian road racer that blasted onto the big 500GP World Championship scene in the mid
to late '90s. If you follow road racing at all, you have probably heard or seen him race. He's
usually the guy doing the massive power slides that include spinning up the rear tire until
smoke is rolling off of it as he powers out of a turn. During the '98 season he was riding
a Honda NSR500V HRC bike that at the time was quite the shit. Honda released two
seperate platforms in the 500 class that year, the standard 4 cylinder as well as this 2 cylinder
bike as shown. Both were obviously 2 stroke-based, as was the entire class at that time, and
both had good and varying results. The several 2 cylinder bikes as I remember were considered
'customer' or satellite team bikes.
Here's a little info on Mr. McCoy as a general overview, a link I found from Rockwall Honda who had the bike for sale, and some results as he posted while running for the Australian-based
Shell Advance team that year. You can also read what I sent Steve on the links above.


Enjoy, thanks again for coming by, and another big tip of the hat to Steve!
Posted by Stuman714 in Indy at 8:22 PM