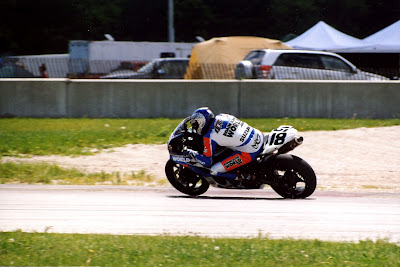 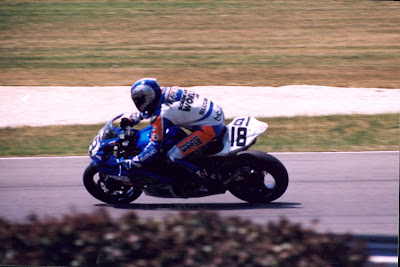 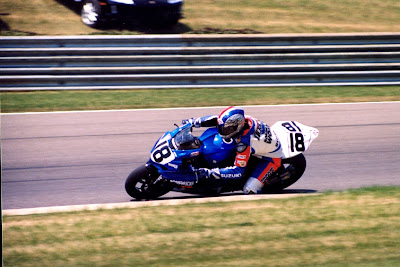 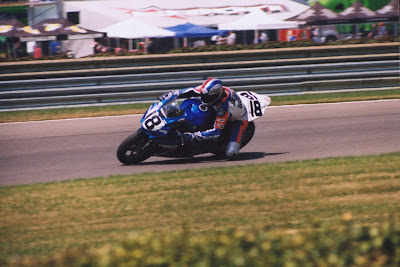 As with some things in life, I'm a little slow on the go on getting this posted this week, but
nonetheless, here we go.
Chris Ulrich, riding the Team RoadRacingWorld.com Suzuki GSXR1000, won the Formula 1
race at Willow Springs Motorcycle Club in California over the weekend. The track, located in
the desert of California, has hosted a large bevy of various racing events over the last half
decade or so. Famous for their different types of classes in the motorcycle racing arena, the
track bills itself as 'the fastest road in the west.'
Mr. Ulrich, son of RoadRacingWorld.com founder/owner John Ulrich, has been racing in the
AMA Super Stock and Superbike classes now for at least the last 4-5 years. With top notch
and ultra sano equipment, Chris is and has been involved with racing probably pretty close to
out of the womb since his Dad has been involved with racing almost as long as dirt has been
around.
I've included a couple of links thanks to the great folks at http://www.roadracingworld.com/ for the
write up on the race, an official team release as well from those folks on Chris and info about
his team and sponsors, and I threw in the official link to WSMC and all of their results as
shown on their site as well as the track lay out. Personally, I've followed this place on/off
from my perch in the midwest via the rags and of course the last dozen or so years via the
internet, and it has always had a great rep for running some bad ass fast races. For bad ass
fast racers like Chris.
The shots thrown in today are of Chris in various forms of practice and qualifying at Road
America, in Elkhart Lake, WI., and at the flowing Barber Motorsports Park in Leeds, AL.
From the top is Chris in action coming out of turn 8 at RA in '06, just before going under what is
now known as the Snap On bridge. Okay--get your head out of the gutter--that would be
Snap On Tools. This was in what I considered the good old AMA Super Stock class.
The other shots are all of Chris in action at Barber in qualifying and practice for the same
class, only these were in '07.
Enjoy and thanks again for coming by!