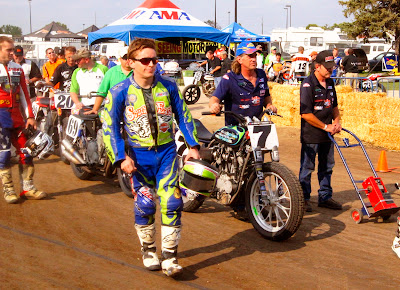 With just two rounds to go in the 2012 AMA Pro Flat Track Harley-Davidson Insurance Grand National Championship presented by Motorcycle-Superstore.com season, the same three men are at the top of a great battle for the AMA Grand National Championship title fight, with Sammy Halbert making his bid again last weekend for the top man on the totem pole after winning his series' leading fourth win of-the-year at the Santa Rosa Mile.

Halbert held tough as the laps wore on and was able to take his #7 South East H-D/The South Ass/Mo Vaughn Transport/LZ Racing-sponsored XR750 to the win after running down early-leader Bryan Smith #42 on the Crosley Radio/Howerton Motorsports Kawasaki after Flyin' Bryan's race line went away at the top of the track.  Halbert and Jared Mees were both able to get around Smith to round out the top-3 on the podium after a great 25-lap National main held for the first time in 42 years at the Sonoma County Fairgrounds in front of a crowded house full of west coast flat track fans.

With the win, Slammin' Sammy was able to secure the 2nd-place spot in the overall championship battle behind points leader Mees (262-248) with 2-Time and defending AMA Grand National Champion Jake Johnson just two points behind.  With the series heading into the Tucson Half-Mile later today in the first of two events left in the season, the tide could easily have swung in Sammy's favor with his skills and strong suit being on the half-mile tracks left on the schedule.  But it's still too early to count out either Jammin' Jared or Jersey Jake in what is boiling down to a great tussle to the finish in The Rolling Thunder Show.

Shown above during rider intros at the Springfield Mile II on September 16, Sammy and his crew roll out the #7 South East H-D just in front of his older brother, Jethro, who was riding the #69 USC Racing Kawasaki during the rain-delayed event at the Illinois State Fairgrounds. 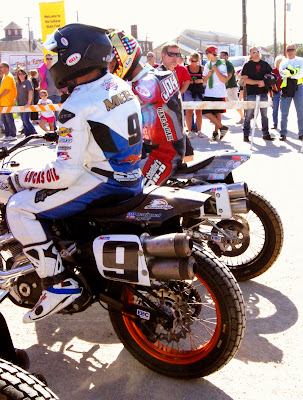 Jared Mees on the #9 Rogers Racing/Blue Springs H-D/Saddlemen/National Cycle-backed XR750 and Jake Johnson on the #1 Zanotti Racing/Schaeffer's H-D/Boughner Racing Suspension/Arai-sponsored XR both put on a great show at Santa Rosa with neither making the Dash event (which was won by Sammy to further gain points on the duo) and Mees was forced to win his semi in order to qualify for the main.  Taking advantage of the groove setting in down low. both ran to the front and were able to finish in the 2nd and 4th-place spots to keep themselves in a title fight that is going to go down to the final round in Pomona in just eight short days.

With Johnson not having won a race yet this season, but kicking out great and solid top-5 finishes to keep the Champ in the hunt, today's event in Tucson could just be what the 2-Time defending champ needs to get that elusive first win of the year and propel him back towards the front in the chase.  But Mees (along with Halbert's Lima win earlier in the season) has a half-mile win under his belt (Hagerstown) from earlier in the year and is always tough to beat.

Wherever you are or will be, you can follow all the action on AMA Pro Flat Track's Live Timing and Scoring today as first practice rolls out at 5:45 PM EDT/2:45 PM MST in what will surely be a great day of racing as the greatest racing show on wheels in the world hits the track at Tucson in the first of two final rounds in the 2012 season.  You won't want to miss it as the stars of The Rolling Thunder Show battle it out on the half-mile in Arizona for all the final marbles in the great title chase happening again this year.

You can follow the action via this link to live timing and check out the press release below for round 14's action at Santa Rosa from last Sunday!

AMA Pro Flat Track results link for round 15 at Tucson: