AMA Flat Track: Shoot Out at Pomona Half-Mile 2012 Season-Finale Tomorrow as Everyone Brings Out the Big Guns 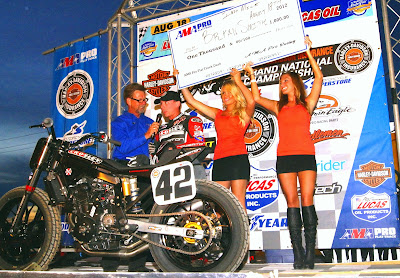 All the big guns will be drawn tomorrow as round 16 of the 2012 AMA Pro Flat Track Harley-Davidson Insurance Grand National Championship presented by Motorcycle-Superstore.com season wraps-up another exciting year in the best racing series on wheels in the world.

In what has been a stellar year for The Rolling Thunder Show in terms of quality events, great crowd turn-outs and multiple-brand racing, the 2012 edition of the AMA Grand National Championship has been nothing shy of spectacular, with as many as seven brands competing in various events and multiple and multiple-time winners dotting the landscape throughout the season.

One of those big guns tomorrow who will be looking to grab a slice of the pie in the race for the Twins Series Championship will be Bryan Smith, on the #42 Crosley Radio/Howerton Motorsports powered by Eaken Racing Kawasaki, who since the machine's initial race way back at round 4 of the season at the Springfield Mile I round has had the fans, teams and riders talking about the rocket-like capabilities that owner, builder and master craftsman Rick Howerton pieced into this finely-tuned machine.  But not once has anyone other than those in the know taken notice of who has been in the seat once the fuse is lit.

Smith, who has contested the series for over a decade now, has been virtually overlooked in terms of his mile track abilities because of the sheer 'wow' factor that the Howerton Kawi has brought to the track in the five mile oval events it contested this season.  Tomorrow will better help tell the tale of whether all the shouting about the MotoGP-like machine is warranted as Smith and the team will contest their first half-mile event in what will surely even the playing field for those that have been shouting the loudest.  And they will add some 'wow' factor to the season wrap-up on the west coast event being held at the Pomona Fairplex.

You can read the original press release from the Smith/Crosley/Howerton team here from last week when the team announced they would be running a sixth event this season in order to help Bryan out with his quest to grab the ceremonial Twins Series Championship:

In the shot above, AMA Pro Flat Track announcer Barry Boone talks with mile master Smith after his win in the Dash for Cash event at round 10 of the 2012 AMA Pro Flat Track Harley-Davidson Insurance Grand National Championship presented by Motorcycle-Superstore.com season at the Lucas Oil Indy Mile.

Be sure and check out the Crosley/Howerton team's flyer below to get in on the fun tomorrow if you are lucky enough to get to Pomona as they will be holding an 'open house' during the fan pit walk and showing off the great wares from Crosley Radio as well as their finely tuned mounts built here in Indy by IndyCar, NHRA and USAC fabricator Rick Howerton. 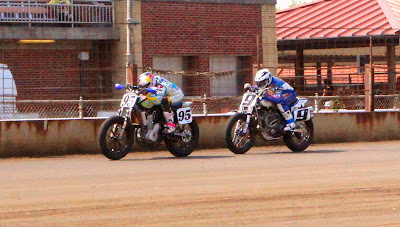 Jared Mees on the #9 Rogers Racing/Blue Springs H-D/Saddlemen/National Cycle-sponsored XR750 tries to run down JD Beach on the #95 USC Racing Kawasaki during their heat race at round 13 of the 2012 AMA Pro Flat Track Harley-Davidson Insurance Grand National Championship presented by Motorcycle-Superstore.com season at the Springfield Mile II on September 16.

Mees, who has a 12-point lead in the overall standings of the 2012 season over Sammy Halbert, will be looking to sew-up his first AMA Grand National Championship tomorrow over title rivals Sammy Halbert and 2-Time and defending AMA Grand National Champion Jake Johnson.  With all of the planets aligned for The Jammer this season, tomorrow afternoon looks to be the day that he gets to add to his '09 & '11 Twins Series Championship and take all the marbles for the big one. 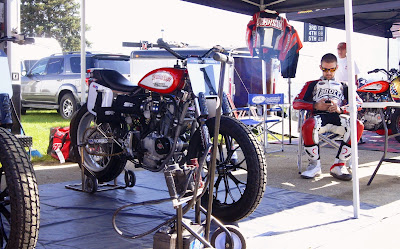 Jake Johnson checks his phone while waiting for the first practice session to hit the track at round 13 at the Springfield Mile II round on September 16.

The '10 & '11 AMA Grand National Champion will have to come back from 20 points down in order to make it three in-a-row tomorrow on the #1 Zanotti Racing/Schaeffer's H-D/Boughner Racing Suspension/Arai-backed XR750 in what has been an up-and-down season for the Pennsylvania resident.  If anyone can do it, Johnson can, but he will need some help to leap-frog Halbert and Mees in order to take home a third #1 plate and continue his winning streak in the series.

No matter who wins tomorrow, the final race of the season is set to be one of the most hotly-contested rounds of the year and will surely leave everyone gasping for more once the final checkers fall and the champion is crowned.

Check out the preview from AMA Pro Flat Track below as we get ready to wind 'er up tomorrow as we wind the 2012 AMA Pro Flat Track Harley-Davidson Insurance Grand National Championship presented by Motorcycle-Superstore.com season down.


DAYTONA BEACH, Fla. (October 11, 2012) - It's off to Pomona, Calif. for the final race of 2012 for the AMA Pro Harley-Davidson Insurance Grand National Championship presented by Motorcycle-Superstore.com and Lucas Oil.  As has become the norm, the AMA Pro Harley-Davidson Insurance Grand National Championship and the Motorcycle-Superstore.com Pro Singles points races are coming down to the wire with three riders in the Expert class and two in the Pro Singles class capable of taking the titles.  The roar of the big twins on the cushion half-mile of the LA County Fairplex will settle the year long war and decide who will take home the $20,000 check from Harley-Davidson Insurance. 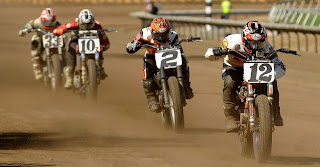 Jared Mees (Rogers Racing / Blue Springs Harley-Davidson / Montgomeryville Cycles) holds a 12-point lead over Sammy Halbert (South East Harley-Davidson / Fredericksburg Yamaha) with defending Grand National Champion Jake Johnson (Zanotti Racing / Schaeffer's Harley-Davidson) 20-points back.  "I still have the points lead. I just have to bring it at Pomona," said Mees. "I'm 12-points up and it only takes one to win it. Pomona hasn't been the strongest race track for me but we'll bring it."


"I'm really looking forward to Pomona. 12 is going to be tough," said Halbert. "No matter how bad Jared struggles at the beginning of the day he will be close at the end. I just have to go out there and dominate and get maximum points and see what happens."


"I'm just going to go to Pomona and try to win. If we can't win the championship I want to at least win a race this year," said Johnson. "Hopefully Pomona is going to be good. Pomona was good for us last year. Hopefully we will go there and finish off the season on a good note."


Of course the title contenders will not be the only riders on the track and everyone will be shooting to end 2012 with a win. Bryan Smith will be back aboard the potent Crosley Radio / Howerton Racing Kawasaki that powered him to wins at the Sacramento and Springfield Miles. It will be his first time to ride the bike on a half-mile.


Other than last year's winner Jake Johnson, Henry Wiles is the only current rider to have a win on the big cushion half-mile. The 2009 winner will be aboard the Foremost Insurance / Lloyd Brothers backed Ducati this year.


The young lions will also be looking to make their mark and Stevie Bonsey will be looking for two in a row aboard his Goodwin Racing backed Harley-Davidson. 2011 Saddlemen Rookie of the Year Brad Baker finished second last year and would like nothing more than to move up one spot on the box. "Pomona went great last year. I think I will go a little bit better on the Harley (Dodge Brothers Racing)," said Baker. "I was second last year on the Duck (Lloyd Brothers Ducati) and I'm feeling pretty good on the Harley. It's just a really fun race track. I'm looking forward to it."


Vanderkuur has posted wins on the miles of Indianapolis and Santa Rosa, but Shoemaker is still in search of his first win of 2012. Shoemaker has stayed in contention by qualifying for every Pro Singles main event this year. Only third places' Jason Isennock (Highs Dairy) can equal that. A couple of DNFs have left Isennock 28 points off the lead with the maximum point payout of 24 available at Pomona. With strong showings last weekend from Shayna Texter (DFW / RLT Racing), Wyatt Maguire (Kirkland Racing / Pro 1 Racing Heads) and Rodney Spencer Jr. (831 Pinnit / GP SPorts), the class will be sure to impress.


The winner of the AMA Pro Motorcycle-Superstore.com Pro Singles title will pocket $10,000 with $5,000 going to second place. 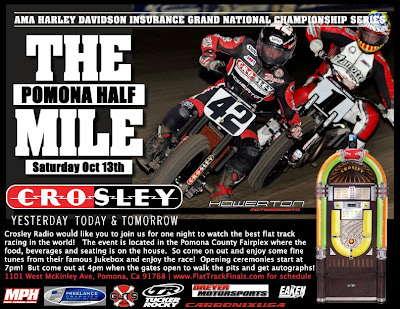