In a matter of just a few short hours, fans, teams, sponsors and riders will hit the track for the season-finale of the 2012 AMA Pro Flat Track Harley-Davidson Insurance Grand National Championship presented by Motorcycle-Superstore.com season at the Pomona Half-Mile as three riders get ready to battle it out for AMA Grand National Championship when the first practice is scheduled to roll out on the track at 6:30 PM EDT/3:30 PM PDT.

With a 12-point lead in the overall standings, Jared Mees on the #9 Rogers Racing/Blue Springs H-D/Saddlemen/National Cycle-sponsored XR750 will be looking to sew-up his first-ever Grand National Championshp after taking the Twins Series Championship in '09 & '11 and earlier this season securing the Singles Series Championship for the first time at the Springfield Short Track.

Sammy Halbert on the #7 South East H-D/The South Ass/Mo Vaughn Transport/LZ Racing-backed XR will be looking to add to his '11 Singles Series Championship and his '09 and 'mythical' overall Grand National Championship title that he carries from the last season that the overall champion wasn't recognized by the series.

Jake Johnson, the 2-Time and defending '10 & '11 AMA Grand National Champion will be looking to retain his crown and become the first 3-Time Champion in-a-row since Chris Carr in the early '00s, as the '02 Rookie of the Year looks to also add to his '06 & '08 Singles Series Championships.  20-points in arrears heading into today's final round, Johnson has a tall hill to climb in order to be able to repeat.

Also being decided today at Pomona will be the now-ceremonial Twins Series Championship for the 2012 season, which sees four riders within nine points of one another for the championship in the 'big bike' class.  With Johnson leading the group with 168 points, Sammy back another three points, Bryan Smith another one point back, and Mees sitting in the fourth spot heading into today's final event with 159 points.  This battle alone could make for some interesting fodder if nothing else today!

Bryan Smith will be trying to go after that ceremonial #1 plate in his first event this season on the #42 Crosley Radio/Howerton Motorsports powered by Eaken Racing/Guts Wear/MPH-backed Kawasaki 650R-based parallel twin.  The Howerton and Crosley folks announced last week they would be supporting Smith in his efforts to claim the Twins Series Championship and will be looking to gauge their level of success in the five mile events this season on a big half-mile track.  This will also lead to another interesting mix in the action today at the Fairplex in Pomona.

In the shot above from the Springfield Mile II on September 16, Smith leads Halbert, Johnson, defending and 2-time Springfield Mile winner Willie McCoy on his #59 Harley-Davidson of Wausau/Independence H-D/Tucker Rocky/Arai-backed XR and Jared Mees with just a few laps to go in what would be Smith's and the Howerton team's second win of the season in their debut effort together.

So while you are getting fired-up for tonight's action at Pomona, you can check out the AMA Pro Flat Track press release below, and then follow along with the Pomona guide further below to keep up with the action in the final round of the 2012 season in The Rolling Thunder Show as we all await the first green flag of the day and the final checkered flag of the season to see who wraps what up and who comes home the day's victor.


Sent on behalf of the promoters of the Law Tigers AMA Pro Flat Track Finals:


POMONA, Calif. (October 11, 2012) - When the Law Tigers AMA Pro Flat Track Finals thunders into action Saturday, October 13th at the Fairplex in Pomona, it will mark the start of the biggest battle of the season. The points are close and the competition will definitely be intense as America's top flat track racers go for the coveted title.


Leading the charge for glory is Jared Mees. Hailing from Clio, Mich., Mees holds a 12 point lead and is eager to take the title. A harder charger from beginning to end, Mees has put his Harley-Davidson into victory lane once this season and on the podium nine times.  "I finished fifth at Pomona last year and ended the year in second overall," he says. "This time out I want to better my finish and take the title.


However, Sammy Halbert of Graham, Wash., has a totally different scenario. Trailing Mees by just 12 points, Halbert is equally as determined to take the coveted title. So far this year, he has scored four wins, the most of any rider in the series, and four podium finishes.  "I really like racing at Pomona," smiles Halbert. "It is a very challenging track and those are definitely the kind I enjoy. I really think I have a good shot at dominating this time out. I took a third last year and hopefully I can better that and bring home the win."


Sitting 20 points behind is reigning champion Jake Johnson. Johnson, who also earned the title in 2010, is looking to make it three-in-a-row. Although he has finished on the podium eight times so far this season, he had yet to take the checkered. Johnson has scored at least one Grand National victory each consecutive year since 2002 and is the only rider to do so. However, with just one race to go this season, Johnson is winless. Determined not to break his record, Johnson is more than determined to repeat his 2011 AMA Pro Flat Track Finals performance and end the year with a win.


And these are only three of the competitors in this, the final race of the season. Fans will get to see an incredible night of intense, ground-pumping action that will crown the two Champions of the AMA Pro Racing Flat Track Series. Both the Harley-Davidson Insurance Grand National Champion and the Motorcycle SuperStore.com Pro Singles Championship will be decided on this Saturday night.


Hitting speeds up to 130 mph and racing handlebar-to-handlebar, flat track racing is indeed the most exciting form of two-wheel racing in America today. There is no time to coast, no time to try and figure out strategy. It is sheer go-for-it from beginning to end. 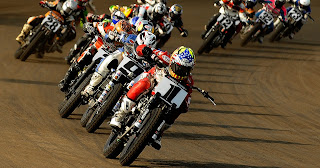 Jake Johnson #1 leads Jared Mees #9, Kenny Coolbeth, Jr. #2, Bryan Smith #42 and the rest of the field during the first lap of the Springfield Mile II on September 16.  Johnson will need to overcome a 20-point deficit in the championship in order to retain his 2-time and defending crown over Mees as the series winds up the 2012 AMA Pro Flat Track Harley-Davidson Insurance Grand National Championship presented by Motorcycle-Superstore.com season at the Pomona Half-Mile today in California.  AMA Pro Flat Track photo by Dave Hoenig.


This year the action starts early as local motorcycle clubs will be featuring their bikes on display at the pre-race tailgate party complete with live music, motorcycle vendors, and family activities will run from 3-5 pm. The racing action gets under way at 6 pm and continues into the night until the AMA Pro Champions are crowned.

You can follow along with all the action at Pomona today with these handy links:

Unfortunately, Miriam Deitcher has discontinued her 'Flat Track Live' page on Facebook, however, she is still providing coverage of events through Sammy Halbert Racing's FB page, and you can keep up with the goings-on here thanks to one of the hardest working people in the business:

The official site for the AMA Pro Flat Track Finals at Pomona:

And it looks like the weather is going to be great today in Pomona, thanks to The Weather Underground: