Sammy Halbert took his #7 South East H-D/The South Ass/Mo Vaughn Transport/LZ Racing-sponsored XR750 to the win yesterday at round 14 of the 2012 AMA Pro Flat Track Harley-Davidson Insurance Grand National Championship presented by Motorcycle-Superstore.com season at the Santa Rosa Mile in Sonoma, California.  Halbert ran down early leader Bryan Smith on the #42 Crosley Radio/Howerton Motorsports/Eaken Racing/Dreyer Motorsports-sponsored Kawasaki after Smith's line went away on the track.  Smith held on to 3rd-place at the end of the 25-lap National main to secure his tie in the Twins Series standings with Sammy Halbert just nine points behind Twins points leader Jake Johnson.

Finishing in an astounding 2nd-place was current overall points leader Jared Mees on the #9 Rogers Racing/Blue Springs H-D/Saddlemen/National Cycle-backed XR after being forced to run the semi (and take the win) and starting in the 13th-place spot on the third row.  The Jammer and Jake Johnson on the #1 Zanotti Racing XR hooked up early in the race as both were forced to start at the back and work their way through the field, and both missing out on valuable Dash points, especially after Slammin' Sammy also scored the Dash win to add to his overall total.  The three head to Tucson on Saturday, October 6 with Mees recovering from what could have been a disaster for his season leading the overall standings with 262 points, Halbert now holding down second with 248 and Johnson now in the third spot with 246 points.

Brad Baker on the #12 Dodge Brothers Racing/Perry's H-D XR was another rider who put in a spirited performance at Santa Rosa.  After breaking early in the day, The Bullet also missed the cut in the semi and was forced to take a provisional to start on the fourth row in the 19-rider field.  Baker fought like the true rider and champ he is to work his way through the field and bring home a very strong 7th-place finish.

Henry Wiles on the #17 Lloyd Brothers Motorsports/Foremost Insurance Group/ENI USA-sponsored Italian 'L'Twin earlier in the day ran away from the pack in his heat race while also getting a 3rd-place in the Dash.  Henry fought the good fight in the National main to bring it home in the 6th-place spot for his and the team's third top-10 of the season.

Brandon Robinson on the #44 Werner-Springsteen Racing/Big Dawg Racing-backed Kawasaki had an off-day for how he has turned his and the Werner/Springsteen team's season around, finishing in the 16th-place spot five laps down after earlier getting second in his heat behind Bryan Smith and carding a 4th-place in the Dash.  Robinson heads to Tucson this Saturday tenth in the overall standings.

One rider of note not in the shot above (taken at the re-start of round 10 of the 2012 season at the Lucas Oil Indy Mile on August 18, the first of Sammy's two mile wins this season and his career!) was Rob Pearson on the #27 Memphis Shades XR.  Bugs fought through after a 3rd-place in his heat behind winner Halbert and runner-up Matt Weidman #20 on the Scott Powersports Kawasaki (18th in the main), to take home his second top-5 of the season with a hard-earned 5th-place finish, and his fourth top-10 of the year in the Twins Series.

Stevie Bonsey (seen above on the #80 Werner-Springsteen Kawasaki) was on the Goodwin Racing XR yesterday and came home in the 14th place spot.  And Kenny Coolbeth, Jr. on the #2 Screamin' Eagle/Harley-Davidson Motor Co/Fox/Arai Helmets-sponsored factory XR750 solidiered home to an 8th-place finish.

Jeffrey Carver, Jr. on the #23 Kiesow Racing XR and Briar Bauman on the #10Z Rod Lake Racing Suzuki rounded out the top-10.

SANTA ROSA, Calif. (September 30, 2012) - In a blazing end to a hot Santa Rosa Mile, Bryan Smith (Crosley Radio/Kawasaki) let a five-second lead slip and Sammy Halbert took full advantage during the 25-lap race at the Somona County Fairgrounds.
On lap 20 of Sunday's AMA Pro Harley-Davidson Grand National Championship presented by Motorcycle-Superstore.com and Lucas Oil main event, Halbert slammed the throttle and stole the lead from Smith, notching his fourth win of the season. The final laps brought the crowd of 12,000 to their feet in what proved to be an absolute thriller between some of the best flat track talent in the world.


"In the beginning, I was playing cat and mouse with Bryan (Smith)," said Halbert. "Once I passed him, I just kept looking back and saw the guys catching me but I adapted and overcame it. It was a great win. I loved coming out here to Santa Rosa and really want to thank all the great fans. I also want to thank my mom, dad, girlfriend and all of my sponsors." 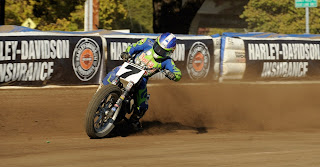 Smith took the holeshot right from the start and was looking as if he was about to cruise to his second consecutive mile-track victory. With 10 laps to go, Smith opened up his biggest lead of the race at 4.9 seconds but it didn't last. Halbert turned on the jets and Smith seemed to lose significant time on the corners causing him to lose his lead.

Jared Mees looked very impressive as he came all the way back from 13th position to finish 2nd in the race. Though Smith dropped the ball at the end, he was able to salvage a podium finish as he barely nicked fierce competitor Jake Johnson by .18 seconds for a third place finish. Johnson andRobert Pearson rounded out the top five finishers, respectively.


Michigan product Stephen Vanderkuur (Parkinson Brothers/Honda) had no mercy on the field today as he was the clear-cut winner by almost a full 10 seconds over second-place finisher Rodney Spencer Jr. (831 Pinnit/Honda). Vanderkuur started from pole position and increased his lead every lap on his way to claiming his second victory of the year.


"I was just riding my own race," said Vanderkuur. "I knew I had to get ahead early and I did just that. This is a big accomplishment for my team as far as the point standings go. I have to thank my team and sponsors for all their support, without them I would not be here. I also want to give a shout-out to the great fans here in California."

The best race on the track was the battle for third. Cole Anderson (Diesel Minnesota/Honda) edged out Jake Shoemaker (Montgomeryville Cycle Center/Honda) by .26 seconds for an impressive third-place finish after starting from eighth on the grid. Less than a second was the difference between finishing in third place and finishing in seventh.


AMA Pro Flat Track heads to Tucson, Ariz. for the Tucson Half-Mile, scheduled for October 6, 2012 at the Tucson International Speedway.


Thanks to AMA Pro Flat Track for this link to the complete results from yesterday's round 14 of the 2012 AMA Pro Flat Track Harley-Davidson Insurance Grand National Championship presented by Motorcycle-Superstore.com season at The Santa Rosa Mile:


And a big thanks to AMA Pro Flat Track photographer Dave Hoenig for this gallery of shots from yesterday's race at Santa Rosa: