Stevie Bonsey on the #80 Dodge Bros/Alpinestars/Saddlemen/A&A Racing-sponsored XR750 leads Dan Ingram on the #31J TCR/Indy Southside H-D/Zanna Racing/Tucker Rocky-backed XR and Jeffrey Carver, Jr. (beside and partially hidden by Ingram) on the #23 Kiesow Racing/Hall's Cycles/Eddie Adkins/Sponseller-backed XR during round 4 of the 2012 AMA Pro Flat Track Harley-Davidson Insurance Grand National Championship presented by Motorcycle-Superstore.com season at the Springfield Mile I on May 27.

Bonsey scored the second win of his career last Saturday night in Tucson by taking the win on the Goodwin Racing XR (and the first win in the series for Goodwin Racing) over a stacked field fighting it out for all the gold in the penultimate round of the season with the series heading into tomorrow's season-finale at Pomona.

Racing for the fourth team this season, the Salinas, California resident showed those on-hand that when he's coupled with the right equipment and conditions that he can duke it out with the best of the best in The Rolling Thunder Show by leading Bryan Smith and championship contender Sammy Halbert home in the 25-lap National main.  Bonsey has prepared and run his own equipment this season with the help of Mack Daddy Racing in the Singles Series, while riding the Dodge Brothers XR, Werner-Springsteen Kawasaki and now the Goodwin XR in the Twins Series events he has campaigned this year.

Stevie's run to the top of the podium at Tucson must surely have started at the Lucas Oil Indy Mile back in August, where in his first ride for the Werner-Springsteen team he was able to take the semi win to make the main event at the Indiana State Fairgrounds.  Several weeks later in the rain-delayed Springfield Mile II event, he was right back on the podium again after winning yet another semi in order to make the National main.  Although those results didn't end with him taking the top step on the box, they surely set the scene for his great win last weekend which doubled his win total in the series after winning the Calistoga Half-Mile round back in July '10. 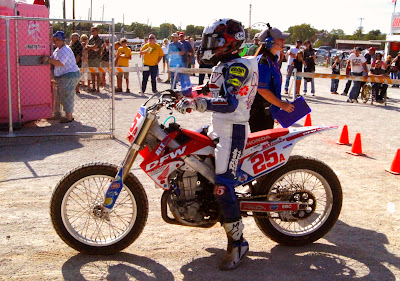 Shayna Texter is shown getting ready for the final round of qualifying at round 10 of the 2012 AMA Pro Motorcycle-Superstore.com Pro Singles Championship Series season at the Lucas Oil Indy Mile on August 18.  The rider of the #25A DFW Honda/RLT Racing/McElroy Packaging/Herr's-sponsored Honda CRF450R added to her win total last weekend in taking the third win of her Pro Singles career and second of the season at the Tucson Half-Mile.  One of the most competitive and popular riders on the circuit, the Pennsylvania resident pulled off the big win in front of a packed house at the Tucson International Raceway by just .132 seconds over runner-up Rodney Spencer, Jr.

Texter is locked into a tight fight for the 4th-place position heading into the final round of the season tomorrow in Pomona with Weirbach Racing's Dominic Collindres, with Collindres holding the nod, 144-140 points, making tomorrow's season-finale a sure bet to be one to watch as the season closes on the AMA Pro Motorcycle-Superstore.com Pro Singles Championship Series for the 2012 year.

A big congrats go out to Stevie and Shayna for their great wins and performances last weekend in Tucson.  Great job to the both of you!

While you're getting ready for tomorrow's action at Pomona, you can check out the press release below on the Tucson round thanks to AMA Pro Flat Track.