Jay Springsteen on the #65X Vista Sheen XR750 leads the late Mark Williams on the #70 XR750 (wearing his Norton factory leathers), Dave Sehl on the #16 XR and Steve Morehead on the #42 Triumph out of turn four during a heat race at the Syracuse Mile round of the Camel Pro Series AMA Grand National Championship in September '75.

Springer would go on to earn Rookie of the Year honors and finish 3rd in the 1975 edition of the Grand National Championship behind '75 Champ Gary Scott and 2-Time AMA Grand National Champion Kenny Roberts, and would take home the #1 plate for the next three seasons in-a-row while riding for legendary H-D factory tuner Bill Werner, who also wrenched Gary Scott to his '75 title, the first of 13 total for the former H-D factory wrench who is now credited with the explosion of the Kawasaki 650R-based parallel twin that is now making headlines in The Rolling Thunder Show.

It was announced this week that Greg Pearson, author of 'The Complete Grand National Championship Volume I,' has now finished Volume II of his book, covering the 1970-1975 seasons and was officially released today.  For anyone that is a long-time fan of the great sport of AMA Grand National Championship racing like myself, both works are a must-have for your personal library.

Filled with photos, race breakdowns and stats galore, the painstaking results of Mr. Pearson are unparalled in the time and efforts he has taken to put these great books together and each will make for hours of great reading and reference material for those wanting to bench race about the golden years of American flat track racing, the greatest sport on wheels in the world.  You can check out Volume I through the Amazon link off of the left side column of the site at the bottom of the page to introduce yourself to the great work that Greg Pearson has put into these works of art and literature.

Check out the press release below thanks to Greg Pearson, and get your copy (or copies) ordered today to add to your library.  You won't be dissapointed!


I am pleased to announce, The Complete Grand National Championship Volume II 1970-1975 is finally finished!  The new 562 page book details the explosion in popularity of GNC racing in the first half of the 1970’s. This was truly at the peak of the “Golden Era” of American motorcycle racing.  Factory involvement was at it’s highest and the best riders competed on dirt tracks and road courses from coast to coast.
Over two years in the making, the book has been painstakingly researched and covers each race and championship.  It is packed with neat trivia and nearly 200 photographs, many never before published. Other highlights include a foreword by two-time Grand National Champion Dick Mann and a tribute to road race legend Cal Rayborn from his close friend, Jim McMurren.
Like The Complete GNC Volume I, the detailed account fills in the gaps and tells the whole story of this exciting era for the first time. 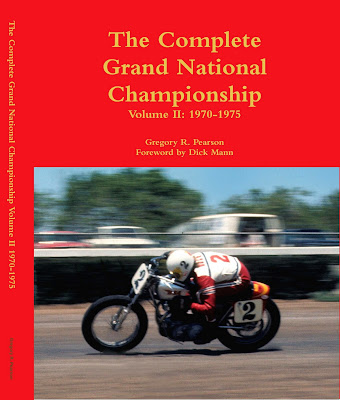 'The Complete Grand National Championship, Volume II: 1970-1975' by Gregory R. Pearson is now complete and is being officially released today.  Photo courtesy of Greg Pearson.
The official launch date for the book will be October 24, 2012.  The book will sell for $39.99 plus shipping, $3.99 for Media Mail, (U.S. only), Priority shipping available.

The books will ship out from the publisher, which normally takes 3-5 days.  PayPal, check or money order are fine.  The book will only be available directly from me until late November, when it will also be on eBay.

The book is a must have for anyone interested in one of the greatest eras in American motorcycle racing.  It will also make a perfect Christmas gift for any fan of GNC racing.


A note to international buyers; I now have an arrangement to ship your books directly from the publisher, greatly reducing most overseas shipping costs.  Please contact me with your address for exact cost.
I am also announcing a change in my email address. Please contact me at my new email address: gncbook@aol.com

You can still reach me at my old address; Gtammyp89@cs.com for a short time.