AMA Flat Track: Stevie Bonsey Takes the #80 Goodwin Racing XR750 to the Win at Tucson Half-Mile in Penultimate Round of the 2012 Season 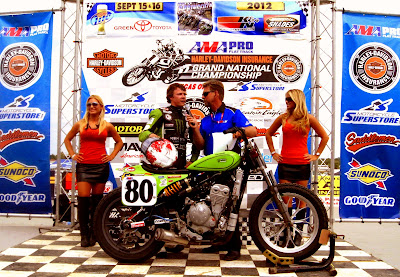 Racing for his fourth team this season, Stevie Bonsey took the #80 Goodwin Racing XR750 to the win last night at the Tucson Half-Mile, round 15 of the 2012 AMA Pro Flat Track Harley-Davidson Insurance Grand National Championship presented by Motorcycle-Superstore.com season.  The Salinas, California resident set the fast heat time win while winning heat one to establish himself as the man to beat at the Arizona venue, and proceeded to control the evening's events by winning the Dash for Cash and leading all 25 laps in the National main event.

Bonsey, who campaigns his own equipment in the Singles Series races with the help of George Mack of Mack Daddy Racing, also has run a couple of events this season on the Dodge Brothers XR team, a handful of events for the Werner-Springsteen Kawasaki/Monster Energy/Alpinestars/Arai-sponsored 650R-based mount (shown above after winning semi race #2 at the Springfield Mile II on September 16) and now with the Goodwin Racing effort.  This guy must have his bagged packed all year long with all the great teams and efforts he has campaigned this season, and other then Brad Baker must be the most-traveled of riders in The Rolling Thunder Show this year.

This is a great win for the young man once promoted as Kenny Roberts' protege.  After winning the 2009 AMA Pro Flat Track Rookie of the Year Award, Bonsey won his first-ever Grand National at the Calistoga Half-Mile in late July '10, and now doubles his win total in the greatest racing series on wheels in the world.

Runner-up last night saw Bryan Smith campaigning his #42 Moroney's FastHog.com XR, and Sammy Halbert rounded out the podium on his #7 South East H-D-backed XR to gain a couple of points on series points leader Jared Mees, who finished in the 4th-place spot last night to still hold the lead in the standings 280-268 over Sammy.  2-Time and defending AMA Grand National Champion fell to 20 points behind series' leader Mees with a 6th-place finish on the #1 Zanotti Racing XR, with Brad Baker rounding out the top-5 on the #12 Dodge Brothers Racing XR.

A big congrats go out to Stevie Bonsey for his superb win last night, this fine young man has been forced to curtail his season's efforts this season due to lack of funds, but the one's he has been running he has been making some big statements, with last night's big win sealing the deal for the wayward team traveler.  Not yet on the pre-entry list for Saturday's final round in Pomona, here's hoping he can hook-up another great ride to close the season out with.  Great job man, we knew you could and would do it again.  Bravo! 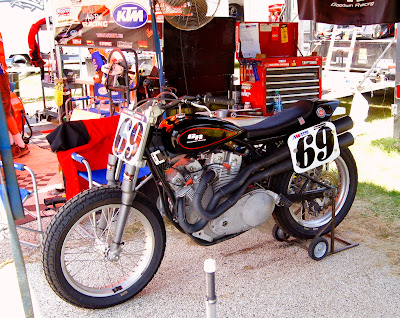 The Goodwin Racing XR sits in the pits during round 4 of the 2012 AMA Pro Flat Track Harley-Davidson Insurance Grand National Championship presented by Motorcycle-Superstore.com season at the Springfield Mile I on May 27.  Jethro Halbert was running the #69 Goodwin Racing/Drew Massa Trans/SHR/Arai-sponsored XR this particular weekend, and brought the machine home to a 7th-place finish.

I believe this is Goodwin's first-ever win in The Rolling Thunder Show, as I am not that familiar with their effort, but a big congrats also goes out to this team for putting one of the best in the business in Stevie Bonsey on their mount and taking the big win last night in Tucson to beat the rest of the best.  Great job guys!

Here is the link to the complete results for round 15 of the 2012 AMA Pro Flat Track Harley-Davidson Insurance Grand National Championship presented by Motorcycle-Superstore.com season at Tucson International Raceway:

Check out AMA Pro Flat Track's official press release on the penulitmate round of the 2012 season at the Tucson Half-Mile from yesterday!

TUCSON, Ariz. (October 6, 2012) - The desert heat had no effect on Stevie Bonsey (Harley-Davidson/Goodwin Racing) as he shredded the competition during Saturday night's AMA Pro Harley-Davidson Grand National Championship presented by Motorcycle-Superstore.com and Lucas Oil main event at the Tucson International Raceway. Bonsey took the checkered flag by over a full second and recorded his best performance of the season. It's been five years since AMA Pro Flat Track has held an event in Tucson, Arizona but the high-octane racing action made it worth the wait. 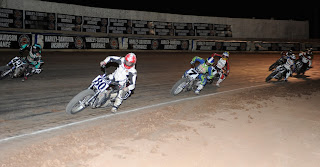 Stevie Bonsey on the #80 Goodwin Racing XR750 took the lead towards the end of the first lap and went on to win the Tucson Half-Mile by over 1.1 seconds over runner-up Bryan Smith on the #42 Moroney's FastHog.com XR.  Sammy Halbert rounded out the podium on his #7 South East H-D XR750 at last night's round 15 of the 2012 AMA Pro Flat Track Harley-Davidson Insurance Grand National Championship presented by Motorcycle-Superstore.com season.  The series heads to the final round in Pomona this Saturday, October 13.  AMA Pro Flat Track photo by Dave Hoenig.

"I came out and did it in front of the Arizona fans here tonight," said Bonsey. "My first victory was in California and luckily my second one came here in front of you guys. From start to finish, I felt good the whole race and I have to thank my guys for giving me this great opportunity."


Bonsey was the pole sitter and clearly had the fastest bike of the night. Sixth-place finisher and defending Grand National Champion Jake Johnson (Harley-Davidson/ Zanotti Racing) got the holeshot out of the gate but that lead lasted less than a full lap as Bonsey went a little lower on the groove off turn four and reclaimed the lead...and never looked back.


Bryan Smith (Harley-Davidson/Crosley Radio) was alone in second place for the majority of the race but saw his comfortable 1.56-second lead over Sammy Halbert (Harley-Davidson/South East Harley) diminish on the final lap. Fortunately for Smith, he was able to hold off Halbert on the final run up the front-stretch to claim an impressive second-place finish.


The bright side for Halbert is that he edged fourth place finisher and current GNC combined points leader Jared Mees to close the gap between them with one final race remaining.

All season long, the AMA Pro Motorcycle-Superstore.com Pro Singles have excelled under the shadows cast by the twin-cylinder engines, and this week was no exception. Shayna Texter (DFW Honda) won her third race of the season and was sharp right from the get-go.


"I have a lot of fans here and I want to give a shout out to them," said Texter. "I also want to thank my team and sponsors; this was a big win for us."


Texter started from pole and when she surrendered the lead to Rodney Spencer Jr. (Honda/831 Pinnit) on lap 12, it looked as if she was going to fall short of the victory. However, on the last turn of the final lap, justice was served as the young phenom ripped the lead right back from Spencer Jr. just in time to capture the checkered flag by a slim .131 second margin.


Spencer Jr. continued to stay hot as this race made for his second consecutive runner-up finish. Jason Isennock (Honda/Highs Dairy Stores) also impressed as he closed out the podium in what proved to be an intense battle for the third spot. AMA Pro Singles points leader Stephen Vanderkuur (Honda/Parkinson Brothers Racing) and Ryan Kearns (Honda/SM Racing) rounded out the top five riders, respectively.