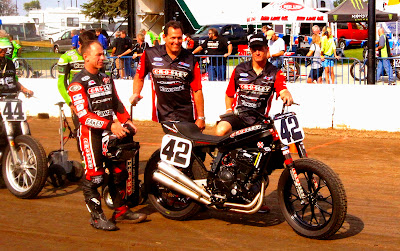 AMA Pro Flat Track Crosley Radio/Howerton Motorsports Team Announces They Will Enter Their Kawasaki for Bryan Smith #42 at Pomona Half-Mile Season-Finale
Indianapolis, IN., October 3, 2012 – The Crosley Radio/Howerton Motorsports powered by Eaken Racing Team would like to announce that we are expanding our 2012 schedule in the AMA Pro Flat Track Harley-Davidson Insurance Grand National Championship presented by Motorcycle-Superstore.com season by one event as entering our pair of Kawasakis for team rider Bryan Smith to campaign at the 2012 Pomona Half-Mile season-finale round on October 13.


In it's first year of existence the Twins Series team has climbed heights and obtained goals that only the very best in The Rolling Thunder Show could aspire for in just five short events. Starting off out of the gate at the Springfield Mile I round over the Memorial Day Weekend, Smith and the team won their first points paying event of the day in the Dash for Cash event after having qualified in the first spot for the National main at the Illinois State Fairgrounds mile oval. By the end of the day we had stood on the podium at a Grand National event when Bryan took home a hard-fought 3rd-place finish.


As far as the added race, "The team decided to run this one extra event to end the season," stated team owner and builder Rick Howerton. “Bryan's been asking me since mid-summer to run some of the other events, and although we originally were just going to run the five mile events this year, we decided to go ahead and help support Bryan in his effort in the Twins Series Championship (where he currently lies tied for the 2nd place spot with Sammy Halbert, behind Zanotti Racing's Jake Johnson) and see what we could do on a half mile track, “ continued Howerton.“We have been really happy this year with the results, but know next year will only be harder" stated the long-time IndyCar, NASCAR and NHRA engineer and fabricator, "by running Pomona it will give Bryan more information for his half mile program next year."

One of the low points of the season was the loss of Skip Eaken, the teams engine builder and motorcycle mentor. “It was a rough time with Skip passing away last week, so we went into the Santa Rosa round wanting to win that one for him. I believe he was the second all time winningest mechanic in the sport, and we wanted to add one more for him. He could appear to most as being cold and grumpy, but once you got to know him he was just the opposite, “ stated Rick a few days after Eaken had passed away due to a heart condition. Howerton still thinks of the conversation him and Skip had after Springfield 1. He called a few days after that race and said "seriously Rick, I watched you guys all day and you guys really made me proud." That meant the world to me as Skip didn't give many compliments. "I will never forget that conversation."


“It has been real fun all year, as all of us on the team get along fantastic. Jeff and Dink are super mechanics, and even better friends. Having a rider with Bryan's capabilities on a mile and a bike like this the rest comes together well, and we're really proud of what we've been able to do in just one season, “ elaborated Howerton.


The team also added another 3rd-place finish to their season total at The Santa Rosa Mile on Sunday, September 30, to make their finishes in five events as two 3rd-place finishes to go along with their two wins and the 14th-place effort at Indy.

Crosley Radio is a company based out of Louisville, Ky. that specializes in modern retro-look sound and entertainment devices, and they are a first-time sponsor in the world of AMA Pro Flat Track's Rolling Thunder Show, bringing a new, bright and great sponsor to the series and to the new team. Having been friends with Rick, it was a great fit having the folks from Crosley on-board to sponsor them according to Crosley Radio president, Bo LeMastus. 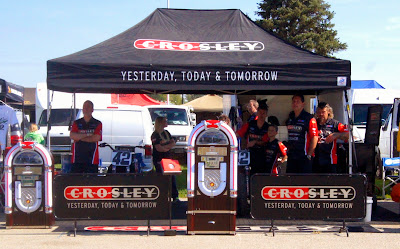 The Crosley Radio/Howerton Motorsports team checks out the action on-track during round 13 of the 2012 AMA Pro Flat Track Harley-Davidson Insurance Grand National Championship presented by Motorcycle-Superstore.com season at the Springfield Mile II, where they were able to take the win thanks to their potent Eaken Racing Kawasaki powerplant and the stellar riding ability of mile specialist Bryan Smith. During the fan-walk at all AMA Pro Flat Track events the team encourages the fans to come by and chat it up with the team, check out the bikes and listen to some of the great music playing in their pit area compliments of Crosley Radio's jukeboxes on-hand. Photo by Mike 'Stu' Stuhler/Stu's Shots.

“We are just thrilled with the job that Bryan, Ricky, Jeff and the rest of the team have done this first season, “ stated Crosley's Bo LeMastus, himself a long-time fan of flat track just like Rick, Jeff Gordon and the rest of the crew on the Howerton team. “It just felt right to go ahead and extend this season into a sixth event to not only help Bryan out with his Twins Series goal but to see what we could work for and towards in the upcoming 2013 season. We hope this will springboard us to be able to announce something in the near future about maybe running some more events for next season together.

“These guys work awfully hard but yet have such a great time together doing it, we're proud and happy to be a part of it and to showcase our products to the legions of Howerton Motorsports, Bryan Smith and AMA Pro Flat Track fans that pay their hard-earned money to come to these events and see the greatest racing in the world, and we open them to come by and visit at each of the events to check out the bikes and listen to some of the music playing from some of our Crosley Radio products,“ continued LeMastus. 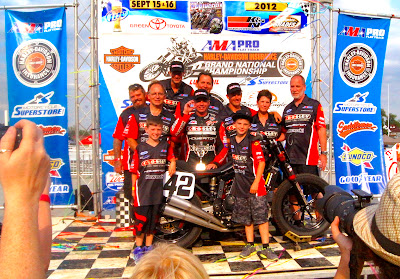 With two rounds left in the 2012 AMA Pro Flat Track Harley-Davidson Insurance Grand National Championship presented by Motorcycle-Superstore.com season at the Tucson Half-Mile on October 6 and the season-finale round at the Pomona Half-Mile, the time is now for you to get in on the great racing in The Rolling Thunder Show, and the Crosley Radio/Howerton Motorsports powered by Eaken Racing Kawasaki team hopes that you will all come out to enjoy the great show at round 16 of the season at the Pomona Fairplex and take the time to come visit us in the pits as we debut our efforts on a half-mile oval and look and listen to the future not far down the road.

Howerton Motorsports would also like to thank these sponsors for their help, support & efforts during our 2012 AMA Pro Flat Track season campaign: