Why You Should Be Reading Larry Lawrence's The Rider Files.com and Cycle News.com Work & The Passing of Duane Dreyer 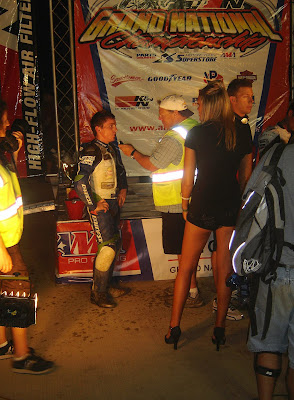 -------------------------------------------------------------------------------------------------
As Larry Lawrence interviews '09 AMA Flat Track Grand National (and mythical) Champion Sammy Halbert after his second place finish to winner Henry Wiles at the Lima Half Mile in June of 2010, a flurry of other activities go on around the scene after the running of the annual classic. The lovely and extremely talented Yve Assad, of The Fast and Dirty.com, can be seen on the left side of the shot while the entertainingly stunning Miss Lima is looking at some of the celebrations going on in the background. AMA Flat Track Announcer Scottie Duebler is on the right of the shot with his headphones around his neck as things wrap up after round seven of the 2010 AMA Pro Flat Track K&N Filters presented by Motorcycle Superstore.com Grand National Championship Series.
'Double L' has been involved in the racing scene in America for over 30 years now, writing for a bundle of publications throughout the decades such as American Road Racing, Cycle News and Cycle World, just to name a very few. His years working with the 'old regime' at the AMA as well as AMA Pro Racing were some of the best in terms of coverage for the sport, the entertainment and overall knowledge and history of the sport, and good sponsors coming and staying on board to help support the AMA and it's thousands of members, and the racing community part of things especially.
Larry's love and background in the sport has given people like you and me a great education over the years, and has produced some of the best shots in racing you will see anywhere. His friendly demeanor and undying ability to talk to anyone, has opened some doors for the average fan to be able to hear, read and see the background of racing at it's best. And he's one of the real all-around nice guys, too.
To put it mildly, if you're not reading any of Larry's stuff, whether it's his great site The Rider Files.com or writing the new and revived digital version of Cycle News.com's Archives column (one of THE best reads in motorcycle racing history), then you are living under a rock as far as motorcycle racing past and current goes, and you are probably the one still using the soup cans to talk to your buddies........get my drift?!
I first met Larry back in May of '82, when both of us were parts of different groups of riders and racing enthusiasts that ultimately converged in Waukegan, IL. on the way to the Road America round of the AMA Superbike Championship Series. I was driving one of two support vehicles for the main exodus of the group out of Indy that consisted of old friends Scott Levondoski, Brad Mercer and Scott Christie, just to name a few. There were between 8-10 riders and two cars that left Indy that cold and damp day in May, and when everyone got together just north of Chicago, the cast had grown by about 6-8 more riders. Of the rain (and alcohol, for some of us) soaked and cold weekend that year, it was not only my very first chance to see an AMA Pro race (and my only chance to see Eddie Lawson compete before heading off to Europe with The King) after having watched the WERA Series for years at Raceway Park in Indy, but it was my first meeting with one of the all-around nice guys in life. Larry showed up in Waukegan with a sano red and white '78 Suzuki GS750, and his party of riders went through more rain in their travels then ours had. And believe me, that's saying alot about that weekend.
I may be a bit more prejudiced about the man then the average fan or friend of the sport, and thusly you may want to take my judgement of people, racing journalists and historians of the sport with a grain of salt. But I'd be inclined to say that where there may be one or two people to say different, there are hundreds to say pretty much the same thing about the guy. If you aren't familiar with Larry's reporting of the sport and it's rich history, you better get started while you can still get out from under that rock........
-------------------------------------------------------------------------------------------------
Thanks to Larry Lawrence for taking the time to give Stu's Shots a nod on his fine site The Rider Files.com this week. Putting together a story about shooting with some of the smaller digital cameras available today, Larry knew that all of my stuff last year was shot with a trusty little '04 model Sony Cyber-shot DSC-P93 5.1 MP 'pocket camera.' I had originally purchased the camera just before Christmas in '04 before going on vacation to supplement my 35mm gear for my very first visit to Pearl Harbor (and of course my great little sister!) After retiring my '73 model Minolta SRT-101 35mm at the end of the 2008 season, it was my only means of shooting for the '09-'10 seasons.

Needless to say, I've had some fun with that little camera over the years, and I am looking forward to the new season to shoot with my new Sony a550 DSLR that I was lucky enough to acquire over the holidays (thanks Mom, I love you!) I've been very fortunate to be able to get some great shots with that little camera that have been showcased in an AMA Flat Track press release on Joe Kopp's retirement from flat track, and in a Motorcycle-USA.com video saluting Mike Kidd for his direction of AMA Flat Track during the 2010 season.

Here's Larry's article about shooting with the little 'pocket' cams, and thanks again to Double L for the mention. You da man!

I had the fortune of first meeting Duane in a high school speech class back in the fall of '72, and got to know him casually over the years as one of the best area racers in motocross and road racing, and another one of the all-around nice guys you meet in life. He was a regular winner at the old Indianapolis Raceway Park motocross track back in those high school days, and then went on to compete with the likes of Scott Zampach, Ed Key and Tom Kipp in WERA Series competition in the early-to-mid '80s.

The motorcycling community has been hit especially hard with the loss of this fine man, and the world has lost another great smile along the way. My condolences go out to The Dreyer Family and all of the fans, friends and people who may have been fortunate enough over the years to have spent any time with Duane. He will be sorely missed. Godspeed DD!

Larry Lawrence did a very admirable job of compiling Duane's life story on The Rider Files.com: