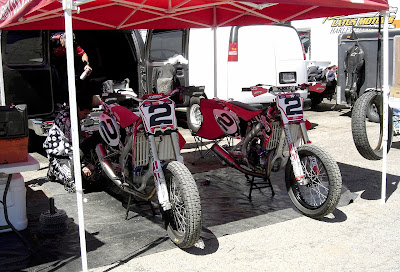 The ruling for sound levels for 450 singles in AMA Pro Flat Track has been, and will continue to be, 105dB. This is measured on the "A" scale at a distance of 20 inches at a 45 degree angle to the exhaust tip. All sound testing is done in accordance with SAE J1287. Bikes are tested at ½ the rated maximum rpm. This is typically 4500 to 5500 rpm depending on the model.

Several fairground type venues have expressed concerns over the excessively loud sound levels in the singles class and have received complaints from nearby residents. AMA Pro cannot be put in a position of losing desirable venues due to competitors’ non-compliance with the rule book.

Over the past two years the technical staff at AMA Pro Flat Track has done random sound testing and has suggested and advised non compliant riders to make suitable changes to overly loud exhaust systems. Starting with the AMA Pro Flat Track Series opening round in Daytona, any riders that violate the sound limits in the rule book will be disqualified from competition.

Per the general equipment standards in the 2011 AMA Pro Flat Track Rule Book: Exhaust pipes and

mufflers must be used and be securely attached together and bolted to the frame.

Mufflers must have sound absorption mechanisms or packed baffling.

AMA Pro will make sound testing available as time and personnel allow previous to the event, but is under no obligation to pre test motorcycles. It is the responsibility of the competitor to arrive at the event with a motorcycle that is in compliance with the rule book.

Below is a preliminary list of approved exhausts. More will be added as time and research allow. Contact AMA Pro Racing for suggestions on additions to the list. All pipes used in AMA Pro Motocross and AMA Supercross must meet a 96dB rule and as such are eligible for AMA Pro Flat Track.

Be advised; just because a pipe is on this list does not mean it will pass sound tech with YOUR particular engine configuration. Once again, it is the responsibility of the competitor to arrive at the event with a class legal motorcycle.

Thanks to AMA Pro Flat Track for this updated technical bulletin!