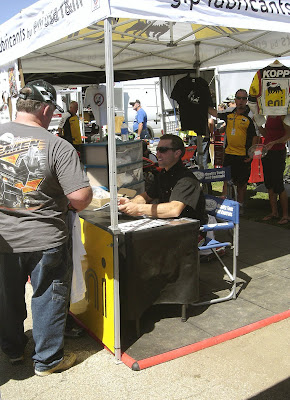 2000 AMA Flat Track Grand National Champion Joe Kopp sits in the Lloyd Brothers Motorsports pit area and talks with the fans at the Springfield Mile in September of 2010. The #3 Latus H-D/Lloyd Bros/Motion Pro/American Agip-sponsored rider, who spent the '10 season jumping back and forth from his LBM Ducati to his Latus XR in the Twins Series portion of the AMA Pro Flat Track K&N Filters presented by Motorcycle Superstore.com Grand National Championship Series, has logged countless hours and miles on dirt tracks around the country in his nearly two decades of racing professionally. But what he is getting ready to take on for the 2011 season is something completely different for him.
After coming up just short in his bid to attain his second AMA Flat Track Grand National Championship in the 2010 season, Smokin Joe announced his retirement from 'full-time' competition in the AMA Flat Track Series. It was something that he had decided to do even BEFORE he fired the loudest shot in some time in the series to win at Arizona on the mile on the LBM Ducati. It was the shot that wrestled the almost-13 season long stranglehold that the Harley-Davidson XR750 had held in winning in the Twins Series portion of the schedule since August of '98. It was time to get away from the dirt tracks on a regular basis and 'dab his toe' (so to speak) in other forms of motorcycle racing. Besides running local events around the Northwest part of the country in the off season, Kopp has also been known to run the AMA EnduroCross series at times, and not surprisingly, with some good results.
So when it was announced that Joe would be a full-time participant in the new class for the full time schedule of AMA Pro Road Racing, riding a Latus-prepared H-D XR1200 in the Vance & Hines/XR1200 Series, it also opened up a new door for him in terms of racing professionally. Having only admitted to trying road racing some in the past, this would be a full-time gig in a pretty new series that has shown some promise in terms of close racing. And as much as I don't care much for a road racing series that doesn't also highlight some of the technological aspects of the sport, it does harken back to the days of the 883/Twins Series classes in road racing some years ago, that ALSO provided some seriously close racing action at less-then-breakneck speeds, but with plenty of elbow-rubbing happening regularly throughout any given event. And admittedly, the class is drawing 'name' riders in what looks to be a very competitive year, in print, as well as from test times that were put in at Daytona in what was a very short session for the XR1200 riders.
Joe's start to his first year in 'non-full time' racing mode is already looking like a pretty crowded schedule. Not only will he be running the Daytona Short Track season openers on March 10 and 11, but he will be putting in his time in the XR1200 class on the big tri-oval on those dates as well. So yes, he WILL be doing some track hopping throughout the two days of flat track and road racing events. But if I was a betting man, I'd lay money he'll still have that million dollar grin going all the while. Go get 'em Joe and good luck!
-------------------------------------------------------------------------------------------------

Former AMA Flat Track Grand National Champion Joe Kopp will be kicking off the new racing season in a little over a week-and-a-half when he will be taking to the high banks at Daytona in the AMA Pro Road Racing/Vance & Hines XR1200 Series, as well as spending time racing on the Daytona Short Track during the AMA Pro Flat Track Grand National Championship season opener at the World Center of Speed. Kopp, who announced his 'full-time' retirement in the AMA Flat Track Series after the end of the 2010 season, will be expanding his resume during the '11 season while dragging a knee in the XR1200 series, and will be running 'select' events throughout the year in the series that he earned the 2000 #1 plate in.

For a guy who wanted to cut back on his 'frequent flyer/driver' miles in the new year, the upcoming year still looks like a pretty full schedule for the veteran rider. Calling Washington State his home, Smokin Joe is probably one of a handful of riders that travel the furthest distance throughout the year to get to races, logging countless hours and miles on the road trying to get to that next event. With a currently 10 race schedule in the works in AMA Pro Road Racing, starting in Daytona and ending in New Jersey, with stops along the way in California, Wisconsin and Alabama, don't look for him to be kicking his feet up and relaxing too much this year. Unless it's in a plane, train or automobile in route to the next race.

You can read Joe's spin on the XR1200 tests at Daytona from last month and what he is expecting out of the new series for this year, as well as his plans to roll out a new Kawasaki KX450 at the Daytona Short Track, after having run Hondas in the Singles Series portion of the AMA Pro Flat Track Series for some time. Today's Cycle Coverage.com has Joe's column here: