AMA Road Racing: Scott Russell Returns to Daytona....But Not on What You Would Expect 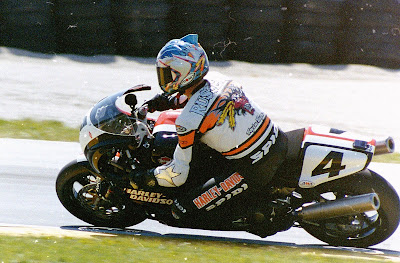 -------------------------------------------------------------------------------------------------
Scott 'The Screamin' Chief' Russell rolls the throttle on the #4 Harley-Davidson Factory VR1000 during qualifying for the Coca-Cola Super Cycle Classic round of the AMA Superbike Championship Series at Road America in June of 2000. The '92 AMA Superbike Champion, '93 World Superbike Champion and 5-Time Daytona 200 winner spent two years riding on the Milwaukee-based superbike team trying to help up the ante for the team in what was then it's seventh season in the premier road racing series in the United States. However, even with The Chief's immense talent in the seat and on the track, the Wisconsin-born machines were never able to stand atop an AMA Superbike Championship Series podium. The factory quietly closed the doors on it's efforts after the end of the '01 season, ending it's long saga to savor victory and leaving behind a list of whose who riders that tried in vain to make their mark on the orange and black machines.
Russell, who was the first 5-time winner of the Daytona 200 (and ONLY in terms of having done so exclusively in the real days of superbikes being the weapon of choice for the over 56 lap endurance race) will be returning to the home of one of his best and most-memorable conquests in his over 20 year motorcycle road racing career. The man who also won the '93 Suzuka 8-Hours is entering the AMA Pro Road Racing/Vance & Hines XR1200 Series, a 'new' class of 'racing' that was brought into the fold last year at select AMA Road Racing rounds. Expanded to a full season schedule for the 2011 season, the 'iron-clad' class will feature some VERY popular names and sponsors for the upcoming season. Joining Russell in the class will be Steve Rapp, Michael Barnes and 2000 AMA Flat Track Grand National Champion Joe Kopp. Some of the series sponsors and team backers (besides V&H) include Anamosa, Iowa's J&P Cycles, Latus Racing (Kopp's long-time sponsor in AMA Flat Track racing) and Parts Unlimited.
Mr. Daytona will be on a HOG-sponsored XR1200 for the one-off deal, in what could bring tears to eyes of his many fans. Having suffered the nuances and 'lack' of technological forward-movement by the H-D factory some 11-12 seasons ago, it is somewhat ironic that after all these years he will be straddling another version of it's infamous V-twin designs.
But, no matter what Scott Russell races (whether it has been his time behind the wheel in the four-wheeled Grand-Am Series, or his attempts to rekindle glory on the failed Jamie James Yamaha SuperStock-based machine at Daytona from several years ago) THIS fan will be paying attention and shouting at the TV (or live timing and scoring on AMA Pro Racing.com) while he is on the track. And wishing him the best of luck, praying and hoping for another Chief victory (and safe voyage) on a two-wheeled platform for which we all know him best.
Go get 'em Chief!
-------------------------------------------------------------------------------------------------
In what may have been met with a loud groan from his legions of fans throughout the world, Scott 'The Screamin Chief' Russell will be returning to what many consider his greatest triumphs when he will jump on a Harley Owners Group-sponsored H-D XR1200 for the season opening round of the AMA Pro Road Racing Vance & Hines/XR1200 Series at Daytona next month. When last seen on the grid in an AMA Pro Road Racing event, Russell had teamed up with '89 AMA Superbike Champion Jamie James to campaign a SuperStock-spec Yamaha R1 in the AMA Superbike Championship round at Daytona several years ago. The last couple of seasons have seen The Chief competing in the U.S.-based Grand-Am Rolex Road Racing Series while also getting to compete at Daytona, albeit in a four-wheel based machine. He has also helped with color commentary for the SpeedTV team's coverage of the AMA Road Racing Series the last couple of seasons.

Scott Russell is the only man to win the Daytona 200 five times on an AMA Superbike Championship-based machine, having done so in '92, '94-'95, '97-'98 while riding for Muzzy Kawasaki and the Yamaha Factory team. In '95, Russell crashed on the first lap and went on a furious rampage to regain the lead and eventually win the race after coming back from a 62nd place spot after low siding his Muzzy ZX-based machine. Probably one of his greatest non-wins at Daytona came in the '93 classic when Vance & Hines Yamaha-mounted (and fill in for injured at the time Jamie James) 4-time 500CC World Champion Eddie Lawson came out of the last turn onto the banking at the World Center of Speed to pin it and catch Russell at the line for what was one of the all-time great races in the history of the Daytona 200.

You can check out the official press release of Scott Russell's return to Daytona here thanks to the great folks at Motorcycle USA.com:

Here's a link to some shots of the XR1200 class in action last year, again thanks to Motorcycle USA.com: