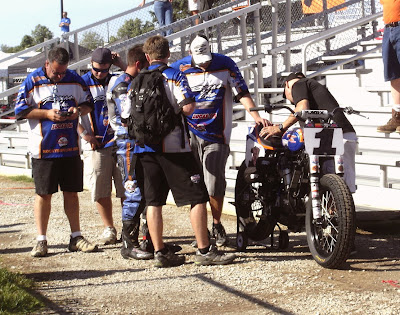 '09 AMA Grand National Flat Track Twins Champion Jared Mees can be seen talking with his Rogers Lake Racing team members shortly after coming up just .096 seconds short of winning the Springfield Mile on September 5, 2010. Finishing third behind winner Bryan Smith on the #42 Monster Energy Werner Springsteen Kawasaki and Chris Carr on the #4 Lancaster H-D XR, Mees won the second heat of the day to earn his ticket to the main event, starting from the middle of the front row, over the annual Labor Day weekend round on the Illinois State Fairgrounds oval. Battling for 25 long, hot and fast laps with two of the other bests in the business (as well as with Jake Johnson, Willie McCoy and Kenny Coolbeth) the the Kawasaki pulled it out over Carr by .048 seconds to take it's second win in a Twins Main event in eight days.
Prior to the podium ceremonies to close out the day's activities, the #1 Rogers Lake/Blue Springs H-D/Rockysonline.com/Lucas Oil-sponsored and XR750-mounted Mees cools off after a great battle, held in front of one of the as-usual stellar crowds at this fine facility. Jammin Jared would finish the 2010 AMA Pro Flat Track season in the third place in the championship, and he was only one of two riders (Chris Carr being the other) that finished the season in the top eight without a series win.
Jared's program is and has always been exceptionally strong, and his riding abilities are top notch, allowing him to post some top finishes in the series to rank high in the points. The former Rookie of the Year and Horizon Award winner should prove as tough as ever in the upcoming season, and as his record has shown, you better not EVER count him out when it comes to top finishes.
-------------------------------------------------------------------------------------------------
Jared Mees wrapped up his second in a row, and third overall ICE Speedway Series Championship in Bloomington, IL. over the last weekend in January. The '09 AMA Pro Flat Track Grand National Twins Champion took home the honors again this year in the popular east and west coast off-season series, and with the 2011 AMA Flat Track Grand National Championship Series getting ready to kick off in Daytona in just over 28 days, Jammin Jared has a great start to the season due to his off-season training regimen and ICE Series participation.

The Michigan rider has long had one of the best overall programs in the series and his outlook to racing, as well as his consistent finishes prove he's one to always keep an eye out for on the track. Catch up with Jared in some of the press and news releases below, as well as his 2010 season review. And be on the look out for this fine young man when the 2011 season goes green on March 10.

You can check out the ICE Series here with results posted for the winter events: