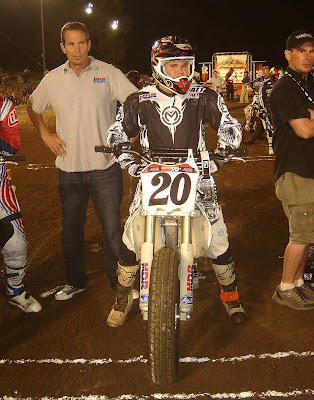 Matt Weidman readies himself for a front row start in the Springfield Short Track round of the AMA Pro Flat Track K&N Filters presented by Motorcycle Superstore.com Grand National Championship Series on September 4, 2010. His sponsor in the Singles Series for the 2010 season, George Mack (Mack Daddy Racing) can be seen on the left side of the shot in the grey MDR shirt.
The #20 MDR/Snip/Silkolene/Shoei-sponsored and Honda CRF450-mounted New York State native will be going it alone for the 2011 season in the Singles Series, as he will departing with 2010 Singles Series sponsor Mack Daddy Racing. Matt and his strong family-backed team (Dad Guy and Mom Rachel are a major force behind his career and upbringing, obviously not only preparing great equipment, but also instilling great family values, respect and level-headedness into this personable young man) will be preparing the Matt Weidman Racing Honda 450s on their own, just as they have done his Twins Series program with the XRs for the last several years.
A couple of highlights to Matt's 2010 Singles Series year included winning his heat race at the Gas City Short Track round in June of 2010, and finishing second to heat race winner Chris Carr at the Springfield Short Track round (pictured) to garner a front row start to the main event, where he eventually came home in the 10th spot. And his third place finish at the Lima Half Mile round at the end of June in the Twins Series put Matt on the box for the first time in his young AMA Flat Track Grand National Championship Series racing career, and helped him to finish ninth in the overall 2010 point standings. He also finished fifth at the Minnesota Mile towards the end of the year on his XR at what ended up being the penultimate round of the '10 season.
Look for Matt to improve on those numbers this year when the season kicks off in just 19 days. Good luck to Matt Weidman Racing in the 2011 season, we'll be watching for you and rooting for you as well!
-------------------------------------------------------------------------------------------------

2008 AMA Flat Track Rookie of the Year Matt Weidman is one of a big handful of racers on the AMA Pro Flat Track Grand National Championship Series rolling road show that will be going it alone for the 2011 season, as Matt and his family-backed and run team will also be preparing his Singles Series bikes along with his Twins Series bikes in the upcoming year. With the Daytona rounds set to kick off the Singles Series and the new year on March 10 and 11, Matt's 2010 sponsor Mack Daddy Racing will no longer be directly associated with his team this year.
Matt's Mom and Dad (Rachel and Guy) will be preparing the whole pie for Matt's assault on the 2011 AMA Pro Flat Track Grand National Championship, and the whole team is looking to improve on their ninth place overall finish during the 2010 season. Last year also saw Matt compete on one of Ron Woods' BMWs at Arizona, as well as trying to qualify one of legendary tuner Carl Patrick's Harley-Davidson XR750s at the Labor Day Springfield Mile round.

We're wishing the very best to Matt and his family in their quest to contest the 2011 AMA Pro Flat Track Grand National Championship Series season. Best of luck to some of the finest folks in the pits!

You can read Matt Weidman Racing's press release here thanks to FlatTrack.com:

And here is a good look at Matt's team building one of his Singles Series Hondas at his official website, MattWeidman.com: