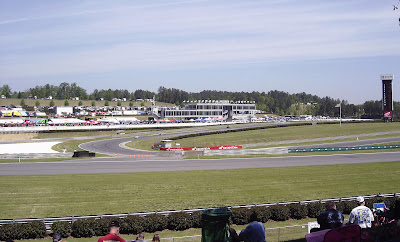 As the racers in the AMA Superbike Championship circle the track during practice at the picturesque Barber Motorsports Park facility, fans spread out across the lawn in anticipation of the upcoming weekend in the AMA Pro Road Racing Series round at the Leeds, AL. track in April of 2007. This viewing mound at Barber takes in almost 2/3s of the track in being able to see the paddock area, the start finish line and the scoring tower, and just out of sight to the right of this shot is the multi-million dollar, and multi-level Barber Motorports Museum, which in itself is a work of art. The track also runs just below the windows in the museum so while you are taking in the sprawling displays inside you can also be staying current with the racing happenings on the track.
Fans of U.S. road racing owe it to themselves to visit the beautiful Alabama track for an event for the racing, AND the iconic museum. Make sure when you do, though, that you leave yourself at least a full day to view the museum. George Barber's collection of racing bikes, cars and one-off specials is enough to make a grown man cry, as well as bringing him to his knees with the layout of classics, modern day pieces and racing and motorcycling history.
Barber, who made his billions in the dairy industry in and around the Birmingham area, has assembled one of, if not THE, best and most complete collections of racing motorcycles and cars in the world. And his list of friends, donors and contributors to his vast collection include Michael Jordan, Jay Leno and the late Don Vesco. The museum has one whole floor dedicated to the restoration of this huge collection, and houses it's own CNC machines to fabricate whatever may be needed to get an old barn find ready for viewing in the museum hall.
I guarantee you will NEVER see anything like this ever in your life again. And the racing ain't too bad, either!
-------------------------------------------------------------------------------------------------

The AMA Pro Road Racing series first visited Barber Motorsports Park in September 2003, then moved to a spring date from 2004 through 2009. Last year, Barber Motorsports Park played host to the final round of the year, an event that saw each road racing class championship decided. Additionally, the AMA Pro Road Racing banquet was held at the Barber Vintage Motorsports Museum, which houses one of the finest collections of motorcycles and racing cars in the world.

"We are delighted to be returning to Barber Motorsports Park," said David Atlas, C.O.O. and Managing Member of AMA Pro Racing. "George Barber has made a tremendous investment in motorsports and motorcycle racing in particular, and our entire series appreciates the first-class facilities that are available to participants and fans alike."

"We are excited to host the AMA Pro Road Racing Series at Barber Motorsports Park and look forward to another exciting weekend of superbike racing," said Gene Hallman, President of ZOOM Motorsports, the exclusive event promoter of the Barber Motorsports Park. "While we enjoyed having the season-ending championship last fall, we are equally excited to be back in our more traditional spring date this year. With the parity of competition in this series at its highest, it's only fitting they return to what is considered one of the finest road racing facilities in the world."

Please visit www.barbermotorsports.com for all schedule, museum, and ticket information, and visit www.amaproracing.com for complete AMA Pro information.
Posted by Stuman714 in Indy at 1:52 PM