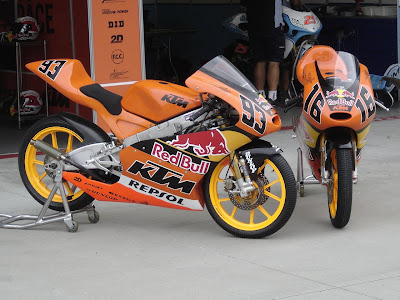 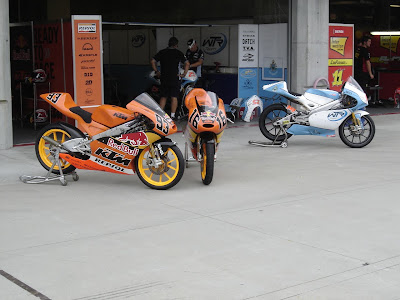 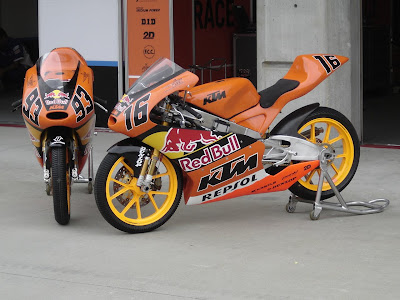 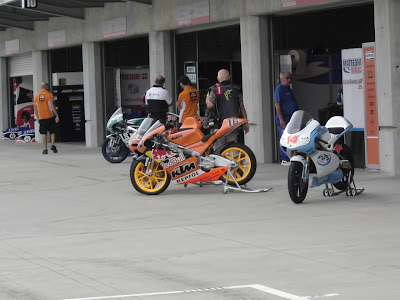 The Austrian KTM Factory team announced officially on http://www.motogp.com/ today that
they will not be participating in the 125GP championship MotoGP class effective with
the start of the 2010 season. The team is talking as if they will be participating in 'other
national and international' classes per the press release earlier today.
Below is that official release, as well as the most recent results for the team at the Portugal
round last w/e, as well as their current standing in the 125GP class with 3 rounds remaining.
The shots above are of the team's steeds as sponsored by the Repsol company as they
were on display at the Indy round of the MotoGP Championship the last w/e in August.
They have quite the overall sano effort, so it will be sad to see them leave the mini-
ring ding class as they are quite impressive as to the cleanliness of their efforts. Enjoy!

http://www.motogp.com/en/news/2009/KTM+announces+withdrawing+from+the+125cc+Championship+in+2010
http://resources.motogp.com/files/results/xx/2009/POR/125cc/RAC/Classification.pdf
http://resources.motogp.com/files/results/xx/2009/POR/125cc/RAC/worldstanding.pdf
I also found this link over at www.RoadRacerX.com that mentions they may be going
WSBK racing. You can find that info about half way into this story:
http://www.roadracerx.com/features/road-racerhead/honda-road-racerhead-40/
Posted by Stuman714 in Indy at 6:51 PM