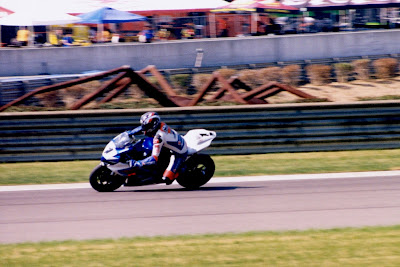 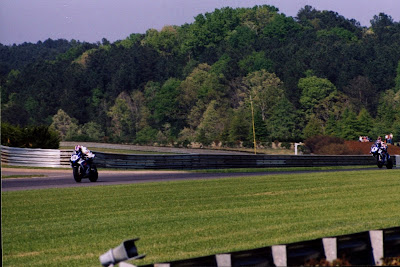 In his quest to run down Nitro Nori Haga on the Team Xerox Ducati for the
10 point lead in the championship finale, Ben Spies put an impressive ride in today
during Superpole at Portimao to clinch the top spot on his Yamaha R1 by over
.58 seconds over the second place man on the grid, Shane 'Shakey' Byrnes on
another Ducati. Here's the link to the official results in pdf form:


Going into the final 2 races of the season tomorrow, Ben's philosophy has been to go
in and win both races to guarantee him taking the title over Nitro Nori, before he moves
on to MotoGP for the 2010 season. This should be a good start to doing so.
You can follow the races by checking out the links on the left side column. The Official
World Superbike site http://www.worldsbk.com/ will have live timing of the races as they go
off beginning on Sunday a.m. Keep in mind Portugal is 5 hours ahead of EDT.

The shots above are of Ben running down Mat Mladin during race 1 of the AMA Road Racing
W/E at Barber Motorsports Park in 2007 and of Ben during qualifying.

Larry Lawrence has a great write up about Ben winning Superpole #11 for the year today over
on his bitchin' site www.theriderfiles.com. You can go to the link below to get the scoop from
ole Double L. Thanks again Larry!