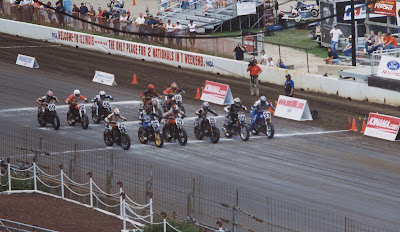 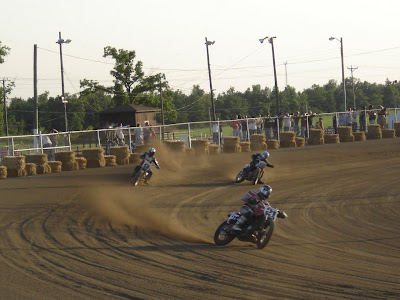 After not transfering directly out of his heat race, Jared Mees nailed down 2nd in the
second of 2 semi-races last night, transfering him to the main event last night in Pomona.
After 25 laps, Mees ended up in 5th place, good enough to win the 'twins' championship over 3-time and defending champ Kenny Coolbeth by 9 points in the final tally.
Congrats to Jared and his Blue Springs Screamin Eagle Team in grabbing the championship
in what was a hard fought year! Great job!
The shots above are of Jared dropping the hammer off the line at Springfield at the Labor Day
W/E running of the mile classic during his heat race in 2006. Also alongside Jared on the #21
bike in the front row are among others #67 Mike Hacker, #42 Bryan Smith, #28 Shaun
Russell, #89 Kevin Varnes and #33 J.R. Schnabel.
In the second shot Jared holds the throttle open coming out of turn 2 at Lima while ahead of
#9 and 3-time GNC Jay Springsteen during practice for the summer classic held the last w/e
of June of every year. This shot was in June of '06.
Posted by Stuman714 in Indy at 12:00 PM