The King Talks About Riding the TZ Again... 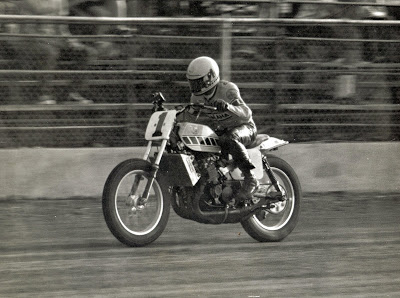 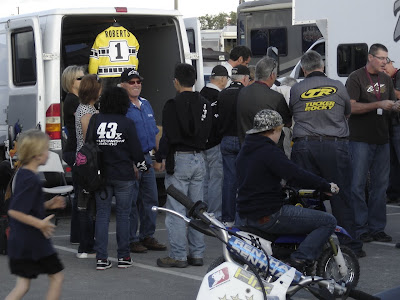 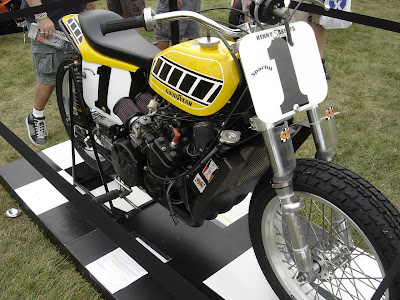 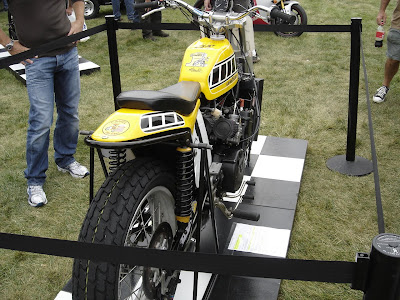 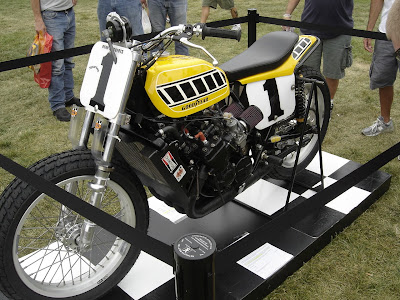 Twas the night before Christmas.....hell, no, seeing this run again after all these years
was BETTER then Christmas man! This was like that long-yearned for toy or experience
or woman that you had briefly flirted with, wanted, or would just about die for. This was
history in the making. To a motorcycle racing fan, this was like being present when Lincoln
delivered the Emancipation Proclamation. This time would live on in infamy....
And to the hard core bike racing fan, like myself, being able to see, let alone hear and see
the man who made it famous, roll it out on that same track some 34+ years later, well, man,
this was like the planets had really aligned perfectly, and Santa Claus had left you the BEST
and BIGGEST present ever! And you were there for the original, and for the follow up to
ensue. This was karmic.
As you have deducted, I am talking, blabbering, drooling again about THE bike that made
history on August 24, 1975, and THE man who rode it to not only the winner's circle but to
history as we all know it. And who to fans of motorcycle racing all know as 'The King,' Mr.
Kenneth Lee Roberts. To see him bring out this very fine replica again that night, was a
very moving and rewarding experience. Like deja vu, but also knowing you REALLY were
there 34+ years ago, too.
But this was Kenny's night, in front of a world class flat track crowd, as well as some of the
world class riders on hand from the MotoGP race running just down the road at the Indianapolis
Motor Speedway. And he DID NOT dissapoint, as he rode out and immediately pinned it and
threw it into the corners on all 3 laps almost as hard has he had done so many years before.
Like Larry Lawrence said then on his http://www.theriderfiles.com/ site, it was TRULY a magical evening, one that will be planted in my mind for many years to come.
So if you were there as well, or even if you weren't, you must take the time as I do to thank
Dean Adams and his people at http://www.superbikeplanet.com/ for posting this link to YouTube of KR talking about that night. And with a pretty decent sound card and speakers, you can hear the sound of the nasty ole 2 stroke wailing in the wind like a chainsaw on steroids and acid. WOW!
The current color shots attached were all taken that w/e of the Indy round of the MotoGP
circus. Yamaha had (another) wonderful display in the vendors area of the infield with this
beauty set up out in front of one of their tents. It's a wonder they didn't have someone
standing by to wipe the saliva off of it because myself I know I made a mess just gawking at
it---and that was before I took these shots as well as the ones from a few weeks ago I posted
of it here on my blog. As Kenny mentioned, Ray Abrams with A&A Racing was the craftsman
that made this particular replica happen. There are suttle differences other then the tires as
KR mentions in the video that made it easy for someone like me who had been there know it
wasn't the original. But it's PRETTY DARN CLOSE! And I would bore you if I pointed those
differences out, anyway. So relish in the beauty of this fine piece. And remember, this IS
history! The other color shot is of KR that night holding court in the pits at the mile.
The original black and white shot above is the original shot I took on that original day of
infamy back in August of '75. It is the same shot as used on my blog header panel, and one
that thanks to so many people like Dean Adams with http://www.superbikeplanet.com/ and Mark Gardiner with http://www.roadracerx.com/ has made a few rounds on the internet and in print here and there as well. I hope you enjoy them as much as I enjoyed taking them. And drooling all over it while doing so.......
http://www.superbikeplanet.com/2009/Oct/091005b.htm
Thanks for the memories Kenny! A great evening and a great steed for a great man and rider!
Posted by Stuman714 in Indy at 5:52 PM