The End of The 250 Era in MotoGP Competition Draws Near... 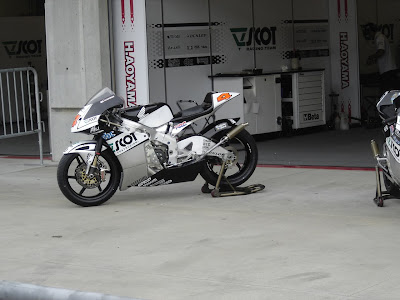 In what was the second to the VERY last race EVER of 250 Grand Prix competition in
the MotoGP circus, Team Scot's Hiroshi Aoyama won the final in Malaysia on Sunday
October 25th. With only the finale at round 17 in Valencia, Spain, on November 8th,
Aoyama only needs to place 1oth to win the 250 crown from current champion
Marco Simoncelli. And with the 250's going the way of the Edsel come the end of the year,
the end of the line in the ring ding class is drawing closer as the winter draws us nearer.
After decades of screaming chain saws on acid belching into the air the pungent smell of
gas and oil mix, the 2 stroke class will officially become the 'Moto2' class and will be made up
entirely of Honda 600-powered, individual team-produced chassis. With the 4 stroke
technology having overtaken the need, or the feasibility of 2 stroke technology, what many
of us have grown up with will now be stored away in a closet much like the toys of yesteryear
we long gave up for adulthood. Or something to that affect.....
So while you ponder the thoughts, memories, and overall love--or hatred if you don't like the
ole ring ding's anyway--of what is surely the passing of the generations, remember the
champions all, the manufacturers all, the crowds of fans scrambling and meandering into their
seats and perches, the wafting in the air of the aroma of oil and gas mix and castor oil, and the final wail of that last race when the chain saws are released for one final time among the masses.
And how the band played on.....

Here are some links concerning Hiroshi and Team Scot and the official results and standings
and race run down compliments of the super people at www.MotoGP.com!


The shot above is the bike that Hiroshi Aoyama has campaigned for the Team Scot HRC Satellite effort in the 250 class of MotoGP. It is a satellite Honda RS250RW, 2009 factory model. This
shot was taken at the Indy MotoGP round on August 28 this year.
Posted by Stuman714 in Indy at 6:16 PM