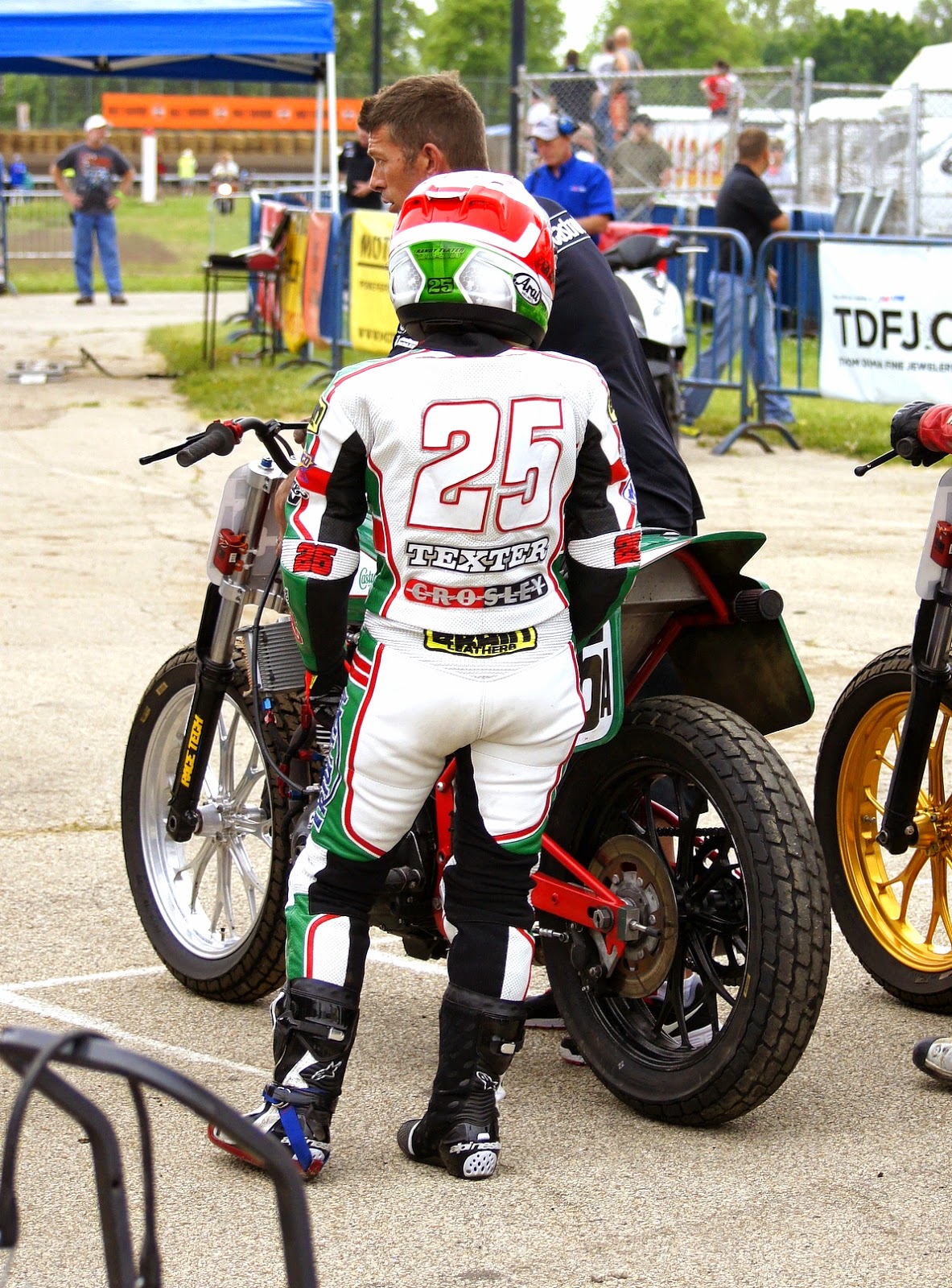 After a rough start to the 2014 AMA Pro Flat Track Grand National Championship Twins Series season at the Springfield Mile I on May 25, there are probably not too many racers that are looking more forward to one of the upcoming west coast events then rookie Expert sensation Shayna Texter.

After a much-hyped debut in the Twins Series class over the Memorial Day weekend's kick-off to the meat of this year's schedule of The Rolling Thunder Show, Texter fought tooth and nail all day long in trying to tame the ugly beast that reared it's head in the form of a high-speed wobble that just wouldn't go away on the #25A Latus Motors/Triumph Racing/Castrol Oil-sponsored Triumph Bonneville. And fight she would as the machine did it's best to try and spit her off each and every lap she was able to muster up throughout the course of the day. And in spite of everything her great crew tried to do in order to overcome the mechanical or suspension malady, nothing seemed to work and she was forced to sit out the day's 25-lap National main at the Illinois State Fairgrounds mile oval.

So without a doubt, Ms. Texter will be looking forward to the late July stop on the calendar at the Sacramento Mile, an event she owned while campaigning the AMA Pro Flat Track Pro Singles Series during the course of the 2012-2013 seasons, winning both year's events after having garnered herself a strong 3rd-place finish during the 2011 event.

But don't worry, with the strong team backing she has from the Triumph factory and former 2000 AMA Grand National Champion Joe Kopp as the team's part-time rider, consultant and confidant, Shayna and her crew should be able to get things worked out on their new machines even before the Sacto Mile rolls around on July 26. And here's hoping that the series' next event, the Knoxville Half-Mile in Knoxville, Iowa this Sunday, June 15 is the one where her and team put it all together for her first big win as an Expert-ranked rider.

Check out the press release below in order to see what Shayna has to say about the series return to the Sacto Mile and find out how ready she really is to head west and try and make it three-in-a-row on the left coast!


Press release courtesy of SMI, the promoters of the Sacramento Mile.

Rookie Expert Calls Cal Expo Track One of Her Favorites

SACRAMENTO, Calif. (June 12, 2014) – The race is still a month-and-a-half away, but it’s easy to understand why Shayna Texter, the 23-year-old factory Triumph rider from Willow Street, Pennsylvania, has July 26th circled on her calendar. That’s when the AMA Pro Grand National Championship comes to Cal Expo and the historic Sacramento Mile. Texter comes into this year’s event with the confidence of having won the Grand National support class (Pro Singles) the last two years and she’s hoping her success at Cal Expo carries over now that she’s made the step up to the premier Grand National Championship.

Never before has a female rider entered the AMA Grand Nationals with the kind of credentials Texter boasts. Texter scored eight support-class wins over the last three years, before stepping up to the Grand National level this season. In spite of being a rookie and racing an unproven Triumph motorcycle, a lot is expected of Texter, especially on the big tracks like Sacramento.
Some point to Texter’s diminutive stature (5’ 0”, 95 lbs.) as one of the reasons she’s been so successful on the Miles, but make no mistake about it, ask any of Texter’s competitors and they’ll readily acknowledge that her excellent riding technique and racing strategy are the main drivers of her success. 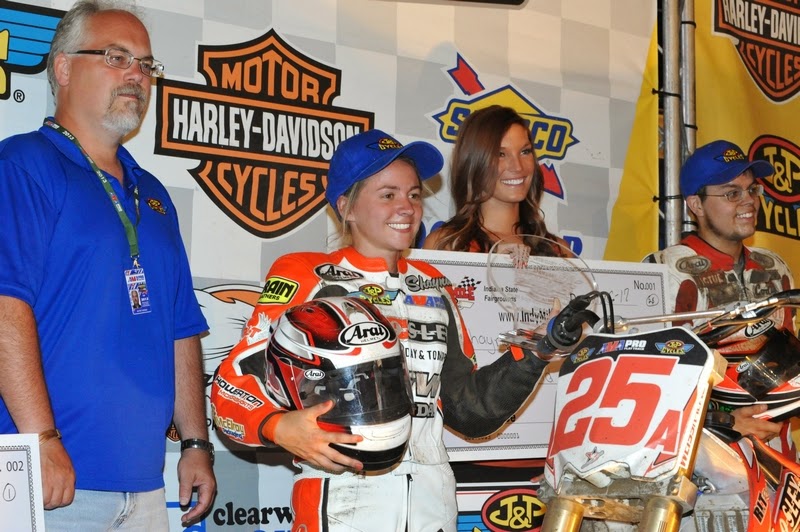 Shayna Texter has been used to winning in the Pro Singles support class, but she acknowledges her goals are a bit more modest this year in the premier AMA Grand National class. Photo by and courtesy of Larry Lawrence.
“Shayna is a smart racer,” says fellow pro Briar Bauman, of Salinas, California. “She’s one of the best at setting up other riders for passes. Most people think she has her biggest advantage with strong drives out of turns, but if you watch her closely she’s actually one of the best at making up time diving into turns with really good speed.”
She gets her race savvy honestly. Texter comes from a racing family. Both her father and grandfather were motorcycle racers, as is her older brother Cory.
In 2013, Texter won two AMA Pro Singles main event victories (Sacramento and Indianapolis), swept the two Basic twins main events at Springfield (Ill.), and finished fourth in the Pro Singles Championship. In 2012, she won three AMA Pro Singles main events (Sacramento, Knoxville and Tucson) en route to finishing fifth in the championship. And in 2011, Texter won the Pro Singles main event at Knoxville (Iowa) Raceway to become the first female to win an AMA Pro Singles National.
Texter faces challenges on multiple fronts this season. Not only is she racing in the Grand National class for the first time, but she’s trying to develop the Latus Motors Racing/Castrol Triumph. At the Memorial Day weekend Springfield (Ill.) Mile, where she debuted on the Triumph, Texter and her team ran into an issue where the bike would get into a high-speed wobble at the end of the straightaways. Texter bravely tried every trick she knew to get the bike to settle down so she could qualify for her first Grand National main event, but ultimately the bike went into such a violent wobble that it nearly threw her off in a qualifying race. She wisely decided to back off the throttle.
There are four nationals upcoming before the Sacramento Mile, including Knoxville, Iowa, this Sunday, so Texter is hoping the team can figure out the handling issues she experienced at Springfield and qualify for her first AMA Grand National, but in spite of what may transpire in the coming weeks Texter says she can hardly wait for the series to roll into Sacramento.
“I’ve had a lot of success at the Sacramento Mile,” Texter said. “I was able to get two wins there and the time before that I was up on the box in third place. So Sacramento is really special to me and it’s one of the special events on the circuit. It’s awesome to race on a track that has so much history in our sport and it’s great to see that it’s back on the schedule this year.”
Texter feels the one-mile dirt oval at Cal Expo suits her style.
“One of the things with me is if I have traction I’m good to go,” she says. “For some reason the Sacramento Mile just comes easy to me. We always seem to have the bike setup great and it really fits my riding style. I seem to be able to finesse my bike there and it’s one of those places where it just clicks.”
While Texter is used to winning at the track, she acknowledges her goals are slightly more modest now that she’s in the Grand National class.
“Realistically I’m not out there fighting for wins this year,” she admits. “Of course every time you come to the track that’s your ultimate goal, but I’m going to be out there fighting for the Rookie of the Year this season. That’s my main goal. It would be huge for me to be the first female to win Rookie of the Year and in order to do that you need to make mains and be consistent. So that’s our goal this year to go out and be consistent and try to win that award.”
The AMA Pro Grand National Championship series Texter competes in is one of the longest running motorcycle racing championships in the world. On the long straights of the Sacramento Mile top speeds can reach 130 miles per hour. Flat track racing has produced many of America’s elite motorcycle racing athletes, such as World Champions Kenny Roberts, Eddie Lawson, Wayne Rainey, Kenny Roberts, Jr. and Nicky Hayden.
Practice for the Sacramento Mile begins at on Saturday, July 26 at 2:15 p.m. and opening ceremonies for the evening program kicks off at 6:15 p.m.
Visit us at: http://www.sactomile.com/
Via Facebook: https://www.facebook.com/SactoMile
Twitter: https://twitter.com/sactomile
YouTube: http://www.youtube.com/user/sactomile
---
*** 2014 Ticket Information: Ticket information is available for the July 26, 2014 Sacramento Mile at www.sactomile.com.
Fans can order tickets online  at https://secure.interactiveticketing.com/a/c84136, by calling 1-844 SAC MILE (1-844- 722-6453) or by visiting the Cal Expo Ticket Box Office beginning June 23rd, in the Administration Building at 1600 Exposition Blvd., Sacramento, CA 95815 from 10 a.m.-5 p.m. (PT) Monday through Friday. Tickets can also be purchased at any ticket window during the 2014 California State Fair.
Tickets for groups of 20 or more also are available. Contact the Cal Expo Group Sales Department at boxoffice@calexpo.com for more information.