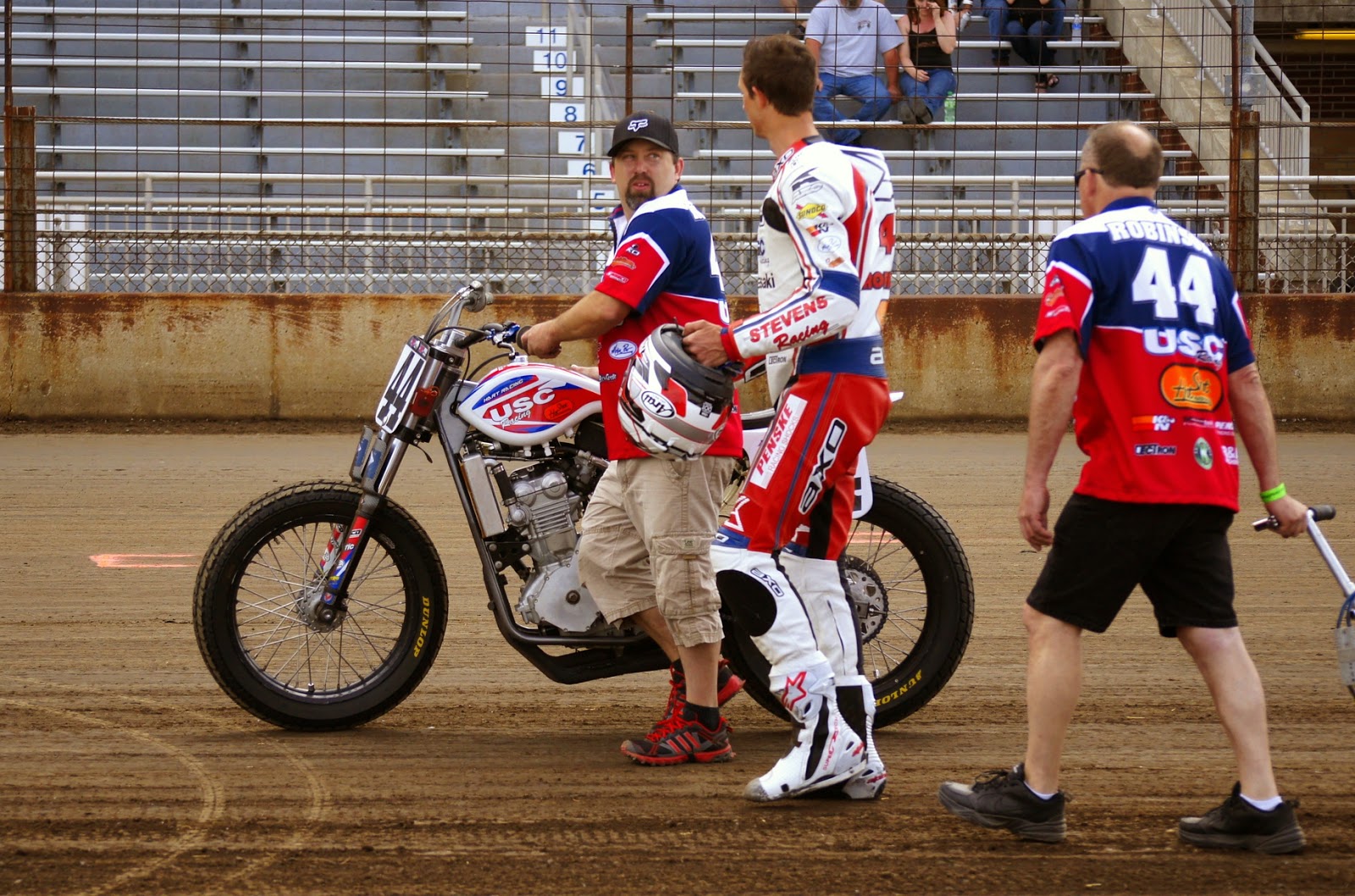 Although the swap wasn't a complete do-over, the team reformation without big man and team head honcho Burnett behind the wheel was a big and formidable step for the second-year Kawasaki pilot and winner of the 2008 AMA Pro Flat Track Basic Twins Championship.

However, the team is showing some solid overall results and their current 5th-place in the overall standings in the young season also shows signs that the move towards the top of the charts isn't that far off.

Still working with the EX650-based equipment as what the team was based around last year, former racer and team crew chief James Hart is getting some solid results and Robinson is still showing those signs of brilliance that took him to 3rd-place in the overall championship standings in 2013. And with the season only four rounds into a 16-race schedule for this year, they have plenty of time to move up even more in the standings with the meat of the schedule ahead of them.

In the shot above, BRob44 and team head and master wrench spinner James Hart talk just before taking their place on the grid with the #44 USC Kawasaki/Hart Racing/Stevens Racing-backed EX650 at round 3 of the AMA Pro Flat Track Grand National Championship at the Springfield Mile I on May 25, where Robinson went on to card a 7th-place finish for his first Twins Series event of the year.

Read on below to hear Brandon's take on the young season behind and the stretch run of the schedule ahead as we get ready to see the teams and riders head to the Lima Half-Mile this coming Saturday, June 28 for the second half-mile event and the third Twins Series round of the 2014 season. And as always, best of luck to Brandon and the team this year, and if you get a chance make sure you drop in to say hi to them at your favorite round(s) coming up this year-you won't meet a friendlier bunch of guys and a hard-working lot at that!

Hey Everyone,
First off I want to apologize for the lack of updates lately. I’ve been somewhat pre occupied finishing out this past college semester. Thankfully I’m less than a handful of courses away from getting my bachelors degree!
Since the last time I sent an update we have raced the famous Springfield Mile where I was able to win both main events last year. This year didn’t go quite as nice as we finished 7th in the main event. We had a solid run going on, but with so many restarts I ended up frying the clutch on the last start and lost some positions after running 4th for the majority of the race.  I’m anxious to get back to another mile track to regain my form.
On to the racing action from this past weekend which was round four of the AMA Flat Track Grand National Championship in Knoxville, IA. It’s a pretty bad to the bone track and I was looking forward to spinning some laps here. Unfortunately I was kind of struggling most of the day. It felt like we changed dang near everything possible going from one extreme to the next. 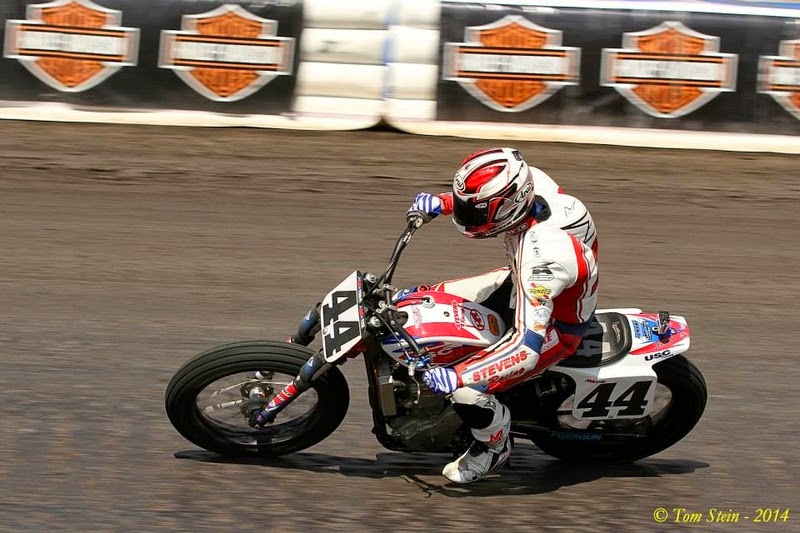 Brandon Robinson on the #44 USC Kawasaki/Hart Racing EX650 is shown in action during round 4 of the 2014 AMA Pro Flat Track Grand National Championship at the Knoxville Half-Mile on June 15 where he scored an 8th-place finish. Photo courtesy of Brandon Robinson/USC/Hart Racing by Tom Stein/Northwest Track Shots.
After timed qualifying we were sitting in the 12th position. I didn’t get a very good start in the heat, but managed to work my way up to 3rd for a direct transfer to the main. For the main we made a bunch more changes and I felt like it was the best we were all day, but still a good bit off the front group. In the end we ended up finishing 8th for some solid points.
We’re still sitting in the top-5 of the Grand National Championship heading into the next round in Lima. This weekend the team and I are heading to Ashland for the All-Star National on Saturday and on Monday I will be testing at the Springfield Mile during the Amateur Grand Nationals. Hopefully we can regain form and get back on the podium!
Thanks again for everyone’s support!
https://www.youtube.com/watch?v=Zyb5vKg1FGA - Springfield Mile Track Walk Video With Me
Thanks, B!
Brandon Robinson - GNC 4415 Wood Valley LaneOxford, PA 19363484-888-9485
Website:  BrandonRobinson44.comTwitter:  @BRob44Instagram: @BRob44Facebook:  Brandon Robinson Sponsors:
USC Kawasaki, James Hart, Hot Shot Motorworks, Stevens Racing, R&D Machine, Arai, ATI Physical Therapy, Penske Shocks, AXO, Go Pro, Saddlemen, Pro Plates, Motion Pro, Royal Publishing, VC Graphix, KK Motorcycle Supply, Hartman Photography, Modotek, PMP Sprockets, Spectro Oils, Wiseco Pistons, Cometic Gaskets, Lectron Carburetors, Evans Coolant, Freegun, Marmor Fitness, G2 Ergonomics, West Coast Hot Shoes, Works Connection, K&N, Impact Armor, Built Clothing, Spider Grips, Spy Optic, WKR, Race Tech, Jim Chapman, Tom Scibek, John Y, TJB