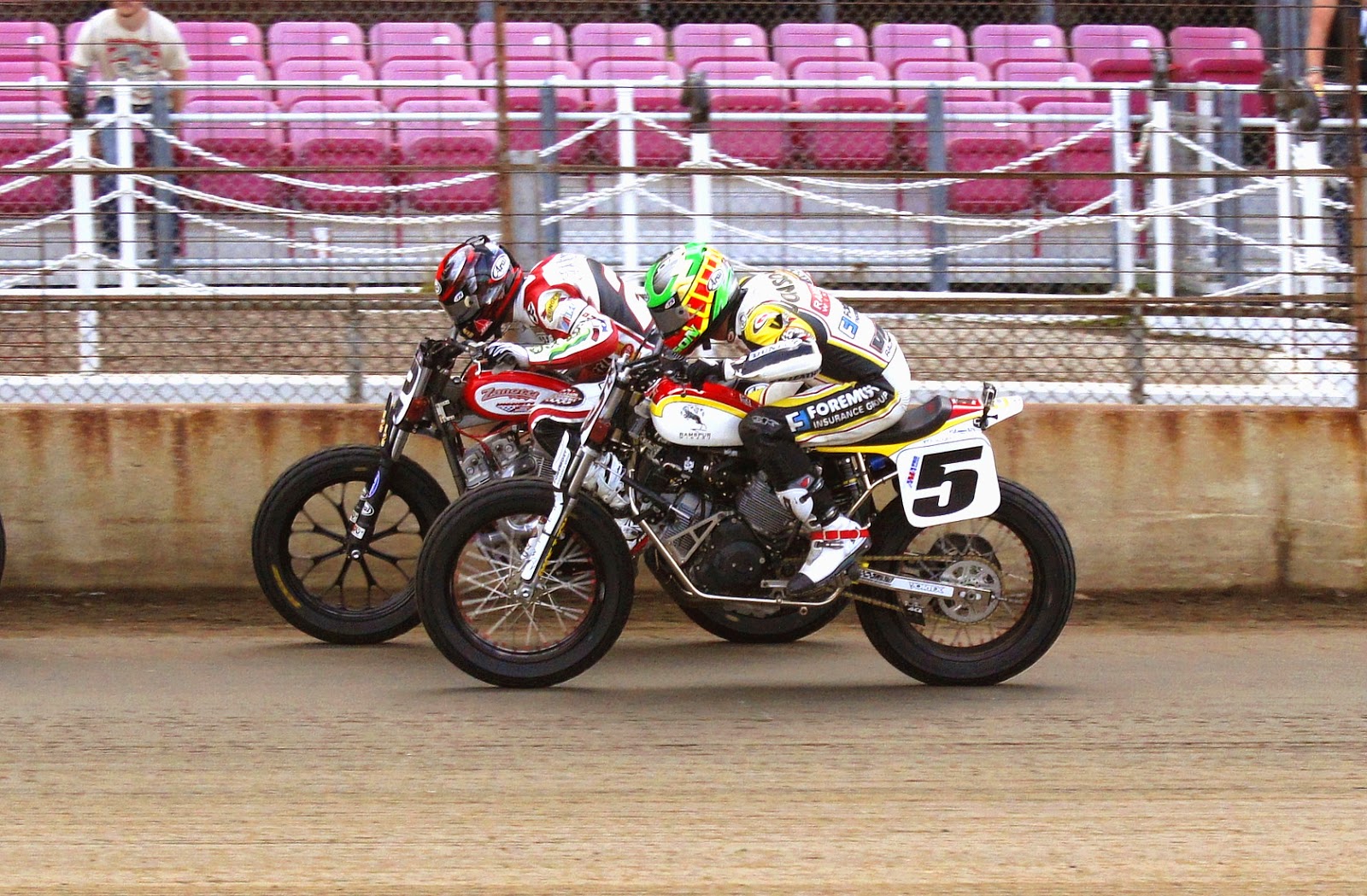 Two of the wily veterans of the AMA Pro Flat Track Grand National Championship led the pack home at round 4 of the season at the Knoxville Half-Mile on Sunday, June 15 in what is shaping up to be another exciting season in The Rolling Thunder Show.

Former Harley-Davidson factory rider Kenny Coolbeth, Jr. on the #2 Zanotti Racing H-D XR750 and former Zanotti Racing pilot Jake Johnson on the #5 Lloyd Brothers Motorsports XR were at the head of the rest of the field all day long, and after things got sorted out for Johnson, who suffered from a slow start in the 25-lap National main, led fellow series' veteran Sammy Halbert home to the podium in what was a repeat of their finishes the last time the series appeared at the Sprint Car Hall of Fame venue during the 2012 season.

Coolbeth, who took his second win of the season after capturing glory at the Daytona Short Track II on March 14, has seen his stock rise considerably since being let go by the Milwaukee factory after the end of the 2013 season, and Johnson is also seeing a resurgence in his game after experiencing what he has termed a time in his career where 'it just wasn't any fun any more.' And you can tell by the smiles on both of their faces and their overall demeanor on and off the track that they are both back on top of their game where they both belong.

With only four rounds into the 16-race season, this year is without a doubt shaping up to be a battle of the best involving some of the long-time veterans of the greatest racing series on two wheels in the world. Kawasaki pilot Bryan Smith sits in 3rd-place in the standings (76 points) after leading Coolbeth and Knoxville 3rd-place finisher and former 2012 AMA Grand National Champion Jared Mees home at the Springfield Mile, while Mees sits in the 4th-place of the championship (74 points) heading into the Lima Half-Mile next Saturday, June 28. Fifth through seventh place in the standings are separated by on four points, with Brandon Robinson (66 points), Sammy Halbert (65 points) and 2-Time Singles Series Champion Henry Wiles (62 points) all running strong early in the season.

In the shot above, Coolbeth on the #2 Zanotti Racing/Moroney's H-D/Burt Ives Honda-sponsored XR leads Johnson on the #5 Lloyd Brothers Motorsports/Ramspur Winery/Parkinson Brothers-backed Ducati during the Springfield Mile I in round 3 of the AMA Pro Flat Track Grand National Championship on May 25.

With several of the teams and riders taking advantage of the test and tune session at Lima this last Wednesday, most notably three of the four top men in the standings (Coolbeth, Johnson and Mees), next Saturday's event at the Allen County Fairgrounds is looking to be another barn burner of a race in what is always one of the series' most popular and exciting venues. And you can't count out Halbert, either, the double winner at Lima (2011-2012) and who also has not missed a spot on the podium in the last four races at the pea gravel track (the series suffered it's first-ever rainout at Lima in 2013, or those numbers could very well have been even more impressive for the Washington State rider.)

If you missed the action at Knoxville last Sunday, you came to the right place as you can take in all the action right here thanks to the archived footage from AMA Pro Flat Track's FansChoice.tv.

Check the full press release out below from AMA Pro Flat Track as they wrap up the Knoxville, Iowa event, and if you don't have any plans for next Saturday you'd better be making them now to attend the Lima, Ohio Half-Mile National, as you won't be disappointed!