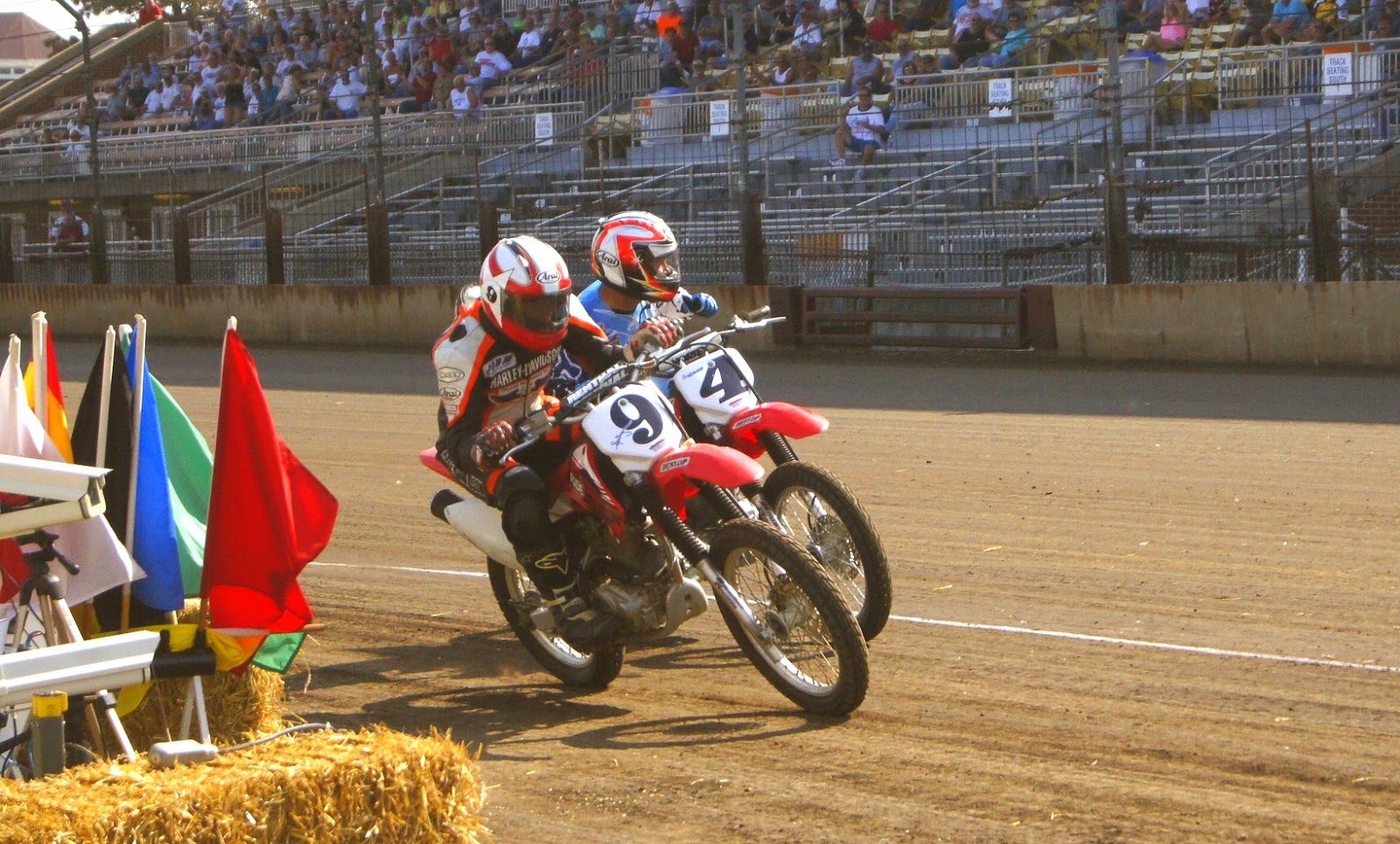 Both riders will be honored at the event and will partake in a special exhibition race during the evening's events that will take place on the mile oval in Sacramento.

In the shot above, Springer #9 and Carr #4 battle--or more like play--during a special Honda CRF150R exhibition short track race held on the front straightaway at the Illinois State Fairgrounds during the Labor Day weekend running of the Springfield Mile I on August 31.

For all of you west coast flat track fans, this will not only be the night to see some of the best of the best in The Rolling Thunder Show duke it out at over 125mph at the Sacramento Mile's great venue, but to also see two of the sports' greatest ever stars and athletes compete in what will surely be an evening for the record books. If you haven't gotten your tickets yet, you'd better act quickly or they will be gone before you know it.

Check out the full press release below for all of the particulars on round 8 at the Sacto Mile and get ready to see not only the stars of today have at it on the mile, but two of the sports' true legends coming out of retirement to thrill the fans.


Cal Expo Clash: Springsteen vs. Carr at the 2014 Sacramento Mile
Two Flat Track Legends to Meet in Friendly Showdown
SACRAMENTO, CA. -- (June 26, 2014) – AMA Grand National legends Jay Springsteen and Chris Carr will be honored as living legends at the upcoming Sacramento Mile on Saturday, July 26. Fans will not only get a chance to meet two of racing’s superstars during the evening’s festivities, but the night will be highlighted by a friendly one-on-one Shootout Exhibition ride on the Mile between the Hall of Famers.
Jay Springsteen is considered one of the best AMA Grand National flat-track racers of all time. Bursting onto the scene and earning the AMA Rookie of the Year Award in 1975, Springsteen won three consecutive AMA Grand National Championships starting in 1976. In 1982 he became the first rider to reach 30 wins in AMA Grand National competition – a feat he accomplished at the Sacramento Mile.
"Springer," as his faithful fans call him, compiled one of the longest and most impressive racing careers in AMA Grand National history, spanning from his 1975 rookie season to 2003, when he announced his retirement from full-time competition. Springsteen was a factory rider with Harley-Davidson for much of his career and was perhaps the racer most closely associated with the American brand from the 1970s through the 2000s. In all he raced in a record 398 AMA nationals, winning a total of 43. Over the years Springsteen became the most beloved rider in the series.
California’s own Chris Carr was the dominant rider in the AMA Grand National Championship during the early 2000s. The native of Stockton won seven national championships and retired second on the AMA Grand National all-time wins list with 78. He rode for Harley-Davidson as a factory rider for much of his early career, but gained the majority of his success as a private team owner. He was also one of the few riders in his era of Grand National racing to attract major corporate sponsorship, being backed by Ford Motor Company. Carr considered the Sacramento Mile his home race and he is one of the most successful riders ever in the classic event. He won a total of nine Grand Nationals in Sacramento, his first coming in 1987 and his final win there coming in 1999.
One of the most versatile motorcycle racers in history, Carr also raced AMA Superbikes as a factory Harley-Davidson rider and gave Harley its first and only AMA Superbike pole in 1996, when he qualified fastest for the Pomona (Calif.) AMA Superbike National in 1996. Ten years later, in 2006, Carr added another chapter to his impressive resume when he became the fastest man on two wheels by setting a motorcycle land speed record of 350.884 mph piloting Denis Manning's BUB Enterprises streamliner at the AMA/FIM International Motorcycle Speed Trials by BUB on the Bonneville Salt Flats.
“We’re thrilled to be able to honor two of the biggest legends AMA Grand National racing has ever known,” said Steve McLaughlin, of SMI, the group promoting the event. “I’ve been a friend and admirer of Jay’s since he came on the scene in the mid-1970s, and of course Chris, having grown up racing on the tracks all around Northern California, he’s one of Sacramento area’s favorite sons. It’s great to have both of them a part of this year’s festivities at the Sacramento Mile.”
The AMA Pro Grand National Championship series is one of the longest running motorcycle racing championships in the world. On the long straights of the Sacramento Mile top speeds can reach 130 miles per hour and this year’s race at Cal Expo is the only Grand National Mile in the West. Flat track racing has produced many of America’s Motorcycle World Champions such as Kenny Roberts, Eddie Lawson, Wayne Rainey, Kenny Roberts, Jr. and Nicky Hayden. Visit www.sactomile.com to keep up with all the latest on the event.
Practice for the Sacramento Mile begins at on Saturday, July 26 at 2:15 p.m. and opening ceremonies for the evening program kicks off at 6:15 p.m.
Visit us at: http://www.sactomile.com/
Via Facebook: https://www.facebook.com/SactoMile
Twitter: https://twitter.com/sactomile
YouTube: http://www.youtube.com/user/sactomile
---
*** 2014 Ticket Information: Ticket information is available for the July 26, 2014 Sacramento Mile at www.sactomile.com.
Fans can order tickets online  at https://secure.interactiveticketing.com/a/c84136, by calling 1-844 SAC MILE (1-844- 722-6453) or by visiting the Cal Expo Ticket Box Office in the Administration Building at 1600 Exposition Blvd., Sacramento, CA 95815 from 10 a.m.-5 p.m. (PT) Monday through Friday. Tickets can also be purchased at any ticket window during the 2014 California State Fair.
Tickets for groups of 20 or more also are available. Contact the Cal Expo Group Sales Department at boxoffice@calexpo.com for more information.
###
Contact:
Larry Lawrence
o. (317) 852-2896
c. (317) 332-3899
www.SactoMile.com
lawrencemedia@hotmail.com