With round 3 of the 2014 AMA Pro Flat Track Grand National Championship at the Springfield Mile I in the rear view mirror, the teams, rider, sponsors and fans are looking ahead towards next weekend's round 4 at the Knoxville Speedway in Iowa. But we have some reviewing to do in advance of next Sunday's event to help set up the rest of the season.

With the first race in some time in the can without the fuel restrictors in place, The Rolling Thunder Show still saw the rocket Kawasaki of rider Bryan Smith on the #42 Crosley Radio/Villa Ezparza/Shoei entry take the win at the Illinois State Fairgrounds, but the overall tone of who could stay with him and actually draft him changed dramatically, as noted in the shot above from around lap 9 of the 25-lap National main at the halls of speed on the Illinois mile oval.

Also spending time at the front for four laps of the event was Jake Johnson on the #5 Lloyd Brothers Motorsports/Ramspur Winery/Parkinson Brothers Racing Ducati. After qualifying 2nd behind Smith and winning his heat, Johnson showed without a shadow of a doubt that he has come to terms with what is still a fairly new gig on the big LBM mount after some early season testing on the machine helped them to get a better base setting for the former 2-Time AMA Grand National Champion. Johnson's 4th-place finish was the best finish for the LBM squad since former team member Henry Wiles' 2nd-place at Lima in 2012 and 4th-place at Indy also in 2012

Kenny Coolbeth, Jr. also spent a lap at the stripe out in front on his new ride on the #2 Zanotti Racing/Burt Ives Honda/Moroney's H-D-sponsored and Dave Atherton-tuned XR. Coolbeth ran second to winner Smith all day long after qualifying 4th, and showed that this wily veteran of the sport was not ready to step aside after being released from the H-D factory team after last year's season. Although team mate Stevie Bonsey's end results didn't show the progress the team made over the off-season in getting ready for the new 'sans restrictors' era, look for these two to step up as the season progresses.

Jared Mees' 3rd-place finish on the #9 Rogers Racing/Las Vegas H-D/Blue Springs-backed and Kenny Tolbert-tuned XR was textbook Mees' and Tolbert journeyman work at Springfield. Mees 2nd-place finish in his heat behind Wiles and 4th-place finish in the Dash were the stepping stones that champions use to put together a solid season run for the big crown, and Mees obviously knows a little bit about grabbing that crown, while Tolbert is undoubtedly one of the tuning kings when it comes to keeping the long-used alloy XR solid and humming along.

And although he didn't spend time at the front after dominating in last year's doubleheader at Springfield, last year's 3rd-place man in the overall championship Brandon Robinson, had a solid day with a 7th-place finish in the main after almost stealing the glory from Johnson in there extremely close heat race. Robinson and the #44 USC Kawasaki/Hart Racing/Hot Shot-sponsored EX650 were in no way overshadowed throughout the day, but with a little massaging of the team's off-season moves the former 2008 Basic Twins Champion and crew chief James Hart should have the new-look effort buzzing along at the front before too long.

Defending AMA Grand National Champion Brad Baker took his new ride on the #1 Harley-Davidson Motor Co/Screamin' Eagle Racing Parts/Dunlop-backed XR-750 at Springfield just over six weeks after breaking his arm just a few weeks after the season-opening rounds in Daytona. Baker took home a solid 5th-place finish in the main while staying with the crowd at the front during all of the red flag restarts. 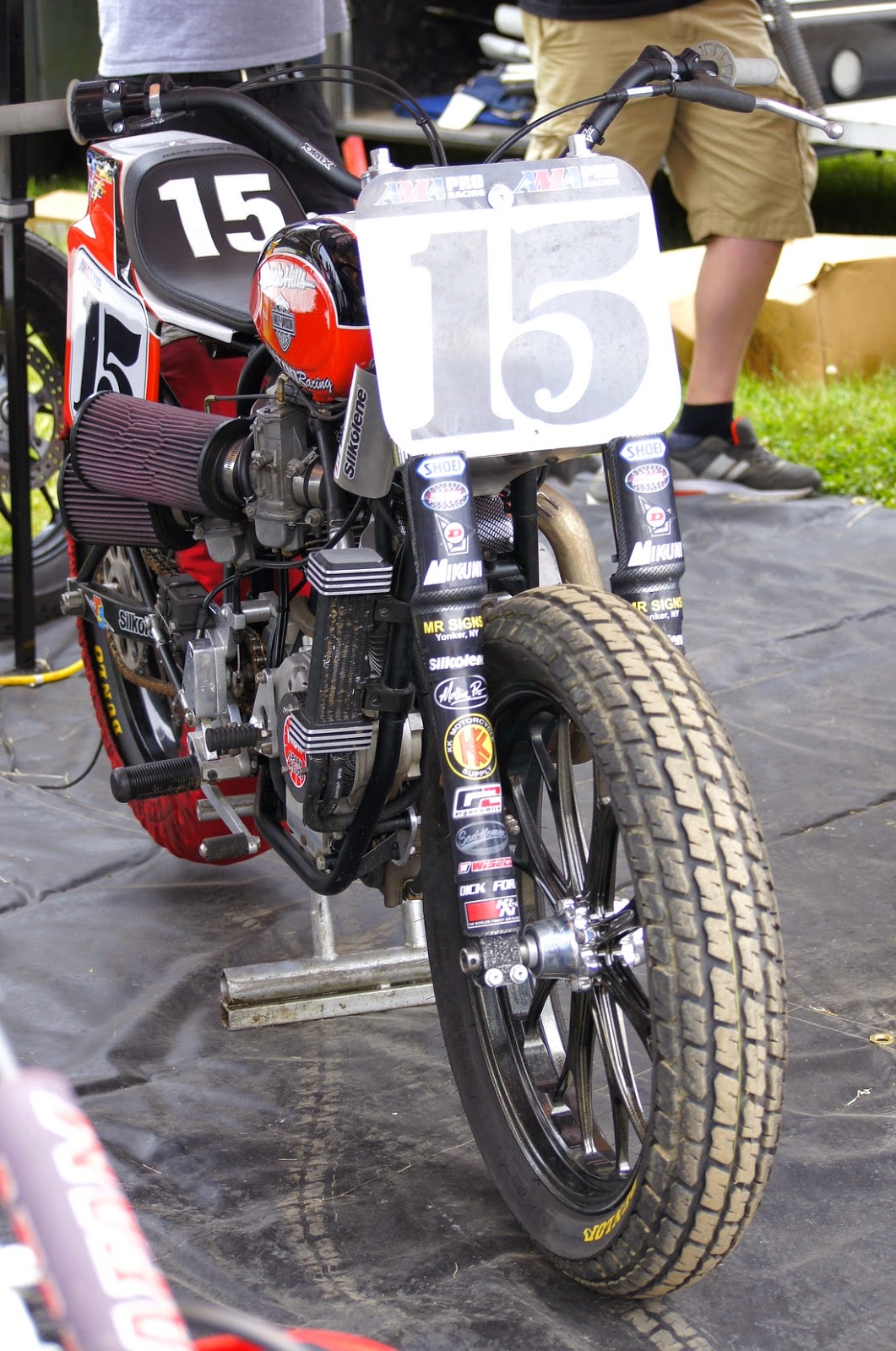 Nichole Cheza-Mees newly-adorned paint job on her #15 Harley-Davidson/Black Hills H-D/Mr.Sign-backed XR sits in waiting in her pit area at Springfield, and the now Mrs. Jared Mees took home her best result of her career at Springfield with a hard-earned 8th-place finish.

After Stevie Bonsey's first get-off in turn 1, the restart saw four of the eventual top-4 and five of the top-6 finishers up front. Henry Wiles on his new ride on the #17 Don's Kawasaki/DPC Racing/EA Racing-sponsored Kawasaki took home 6th-place after winning his heat race over Mees and Willie McCoy on his #59 H-D of Wausau/Tucker Rocky/Independence Harley-Davidson-backed XR-750. Here Smith leads Coolbeth, Mees, Johnson, Wiles and McCoy heading into turn 1 on lap 13's restart. 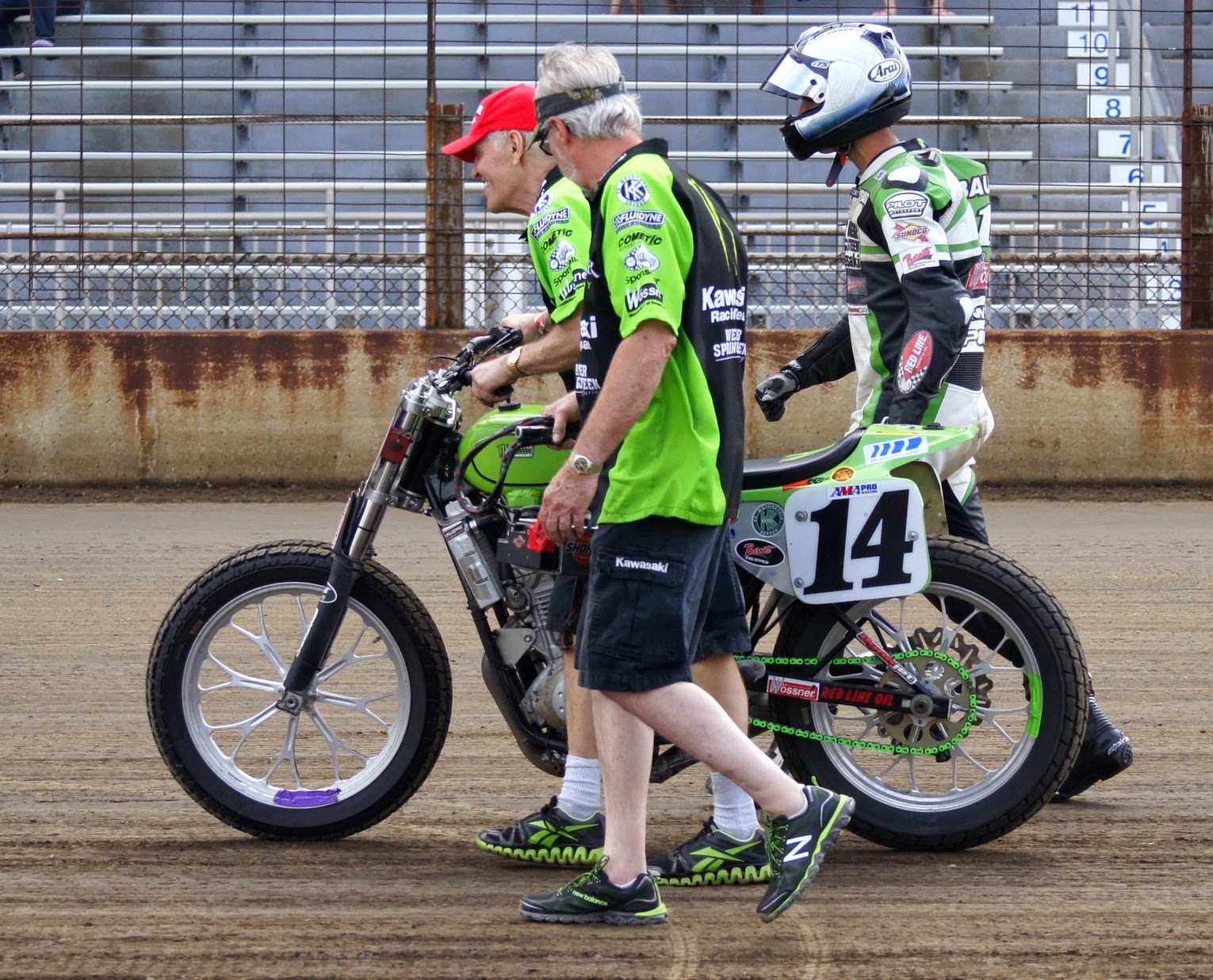 2012 Rookie of the Year Briar Bauman's 9th-place finish was a great result after missing the program entirely in the Labor Day weekend running of last season's Springfield Mile II. The #14 Werner-Springsteen Racing/Monster Energy Kawasaki/Cometic Gasket-backed effort probably suffered more from the day's outing due to a glitch in AMA Pro Flat Track's records for the event after he and the team were announced during rider intros without their sponsor's names being mentioned. Needless to say, the presence of Monster and long-time tuner and all-time winning tuner Bill Werner during the day's events left little doubt as to whom helped foot the great effort that helped get Bauman and the team a solid top-10 finish. 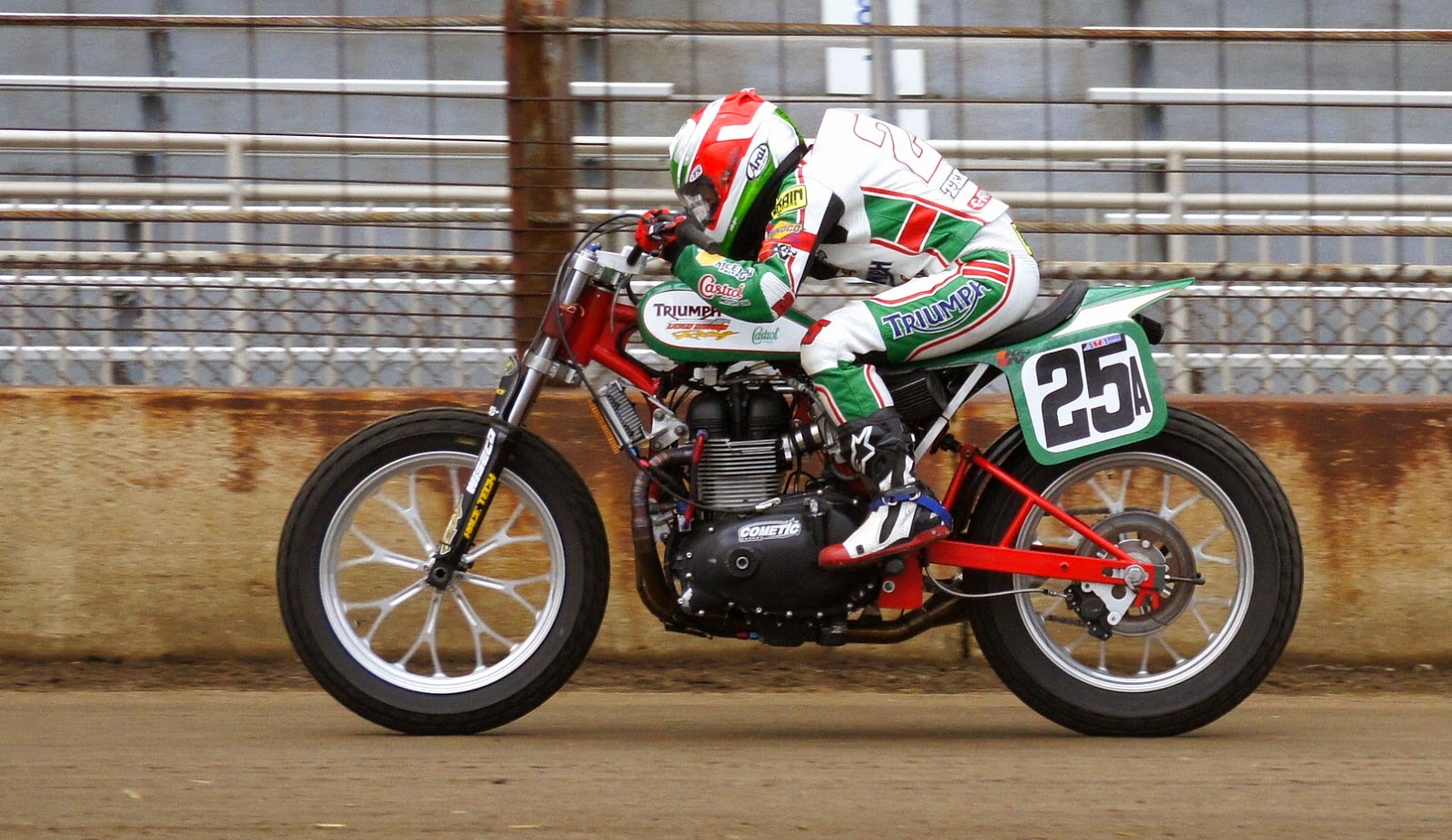 Although she missed the main, probably the ride of the day belonged to Shayna Texter in her new outing on the #25A Latus Motors/Castrol Oil/Crosley Radio-sponsored Triumph Bonneville effort. Suffering from a series of angst-inducing head and tail shaking along the straights at Springfield, the former Pro Twins/Basic Twins double winner from last year's Labor Day weekend fought the ride of her life in keeping the big parallel Triumph twin upright, without it planting her in the ground where a much lesser rider may have ended up. Without a doubt it was a great effort on her part to keep it from doing so, and with some chassis tweaking and adjustments that were made and will be need to be made she showed the crowd on-hand that she will never say die. A superb effort that never saw the outcome that it should have in her first race as a Grand National Expert rider, Shayna and the team will prevail and the great looking effort on all parts of the team should pay off come the rest of the season. 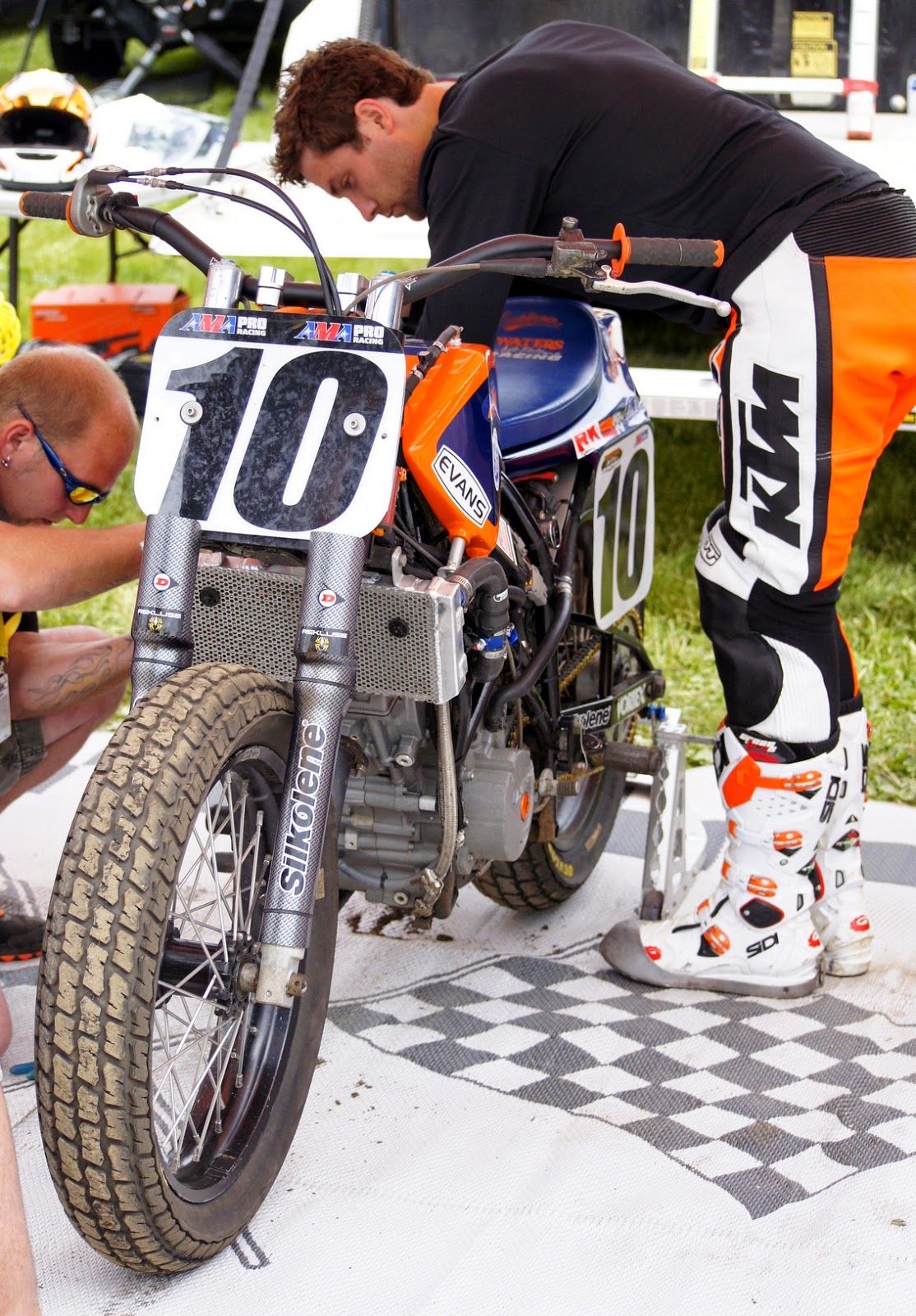 One of the other new rider and team combinations for this season comes in the form of former AMA Supermoto Champion and Scott Powersports Kawasaki-pilot Johnny Lewis and the #10 KTM/GE Capital/Waters Autobody-backed KTM LC8 950 team. After spending last season working with the Latus Motors Triumph squad and riding three different machines during last Labor Day's Springfield doubleheader outing, Lewis and the Waters team had their first outing together on the beautiful orange and blue KTMs. Showing his usual flair and body english style throughout the day, Lewis and the team finally got the settings right for him to take the win in semi race #1 after a slow start over Nichole Cheza-Mees that put them into the National main in their first time on the track together. Although their day only lasted 15 laps, Lewis and the big and vibrant-looking KTM looked to be a good match for the new season ahead and something for the WAB KTM to look forward to after all their hard work in campaigning the big KTMs for the last five seasons. 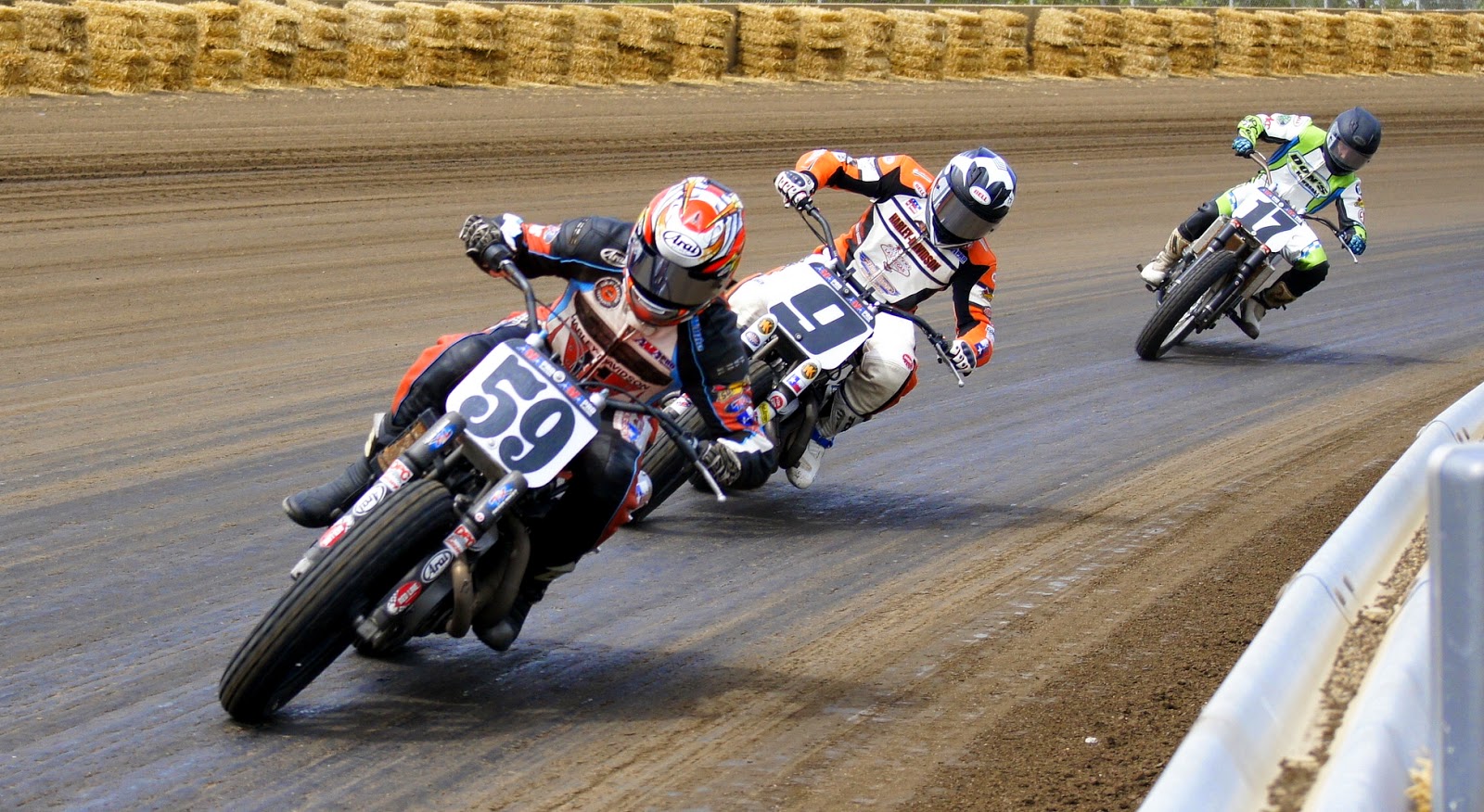 Heat race #3 at Springfield saw Willie McCoy #59 dominate the first seven laps of the event, with 2012 AMA Grand National Champion Jared Mees holding his own in keeping the two extremely close throughout. But it wasn't to be for either, as Henry Wiles got them both on the last lap to take his first heat race win on his new #17 Don's Kawasaki/DPC Racing/EA Racing-EX650 effort. 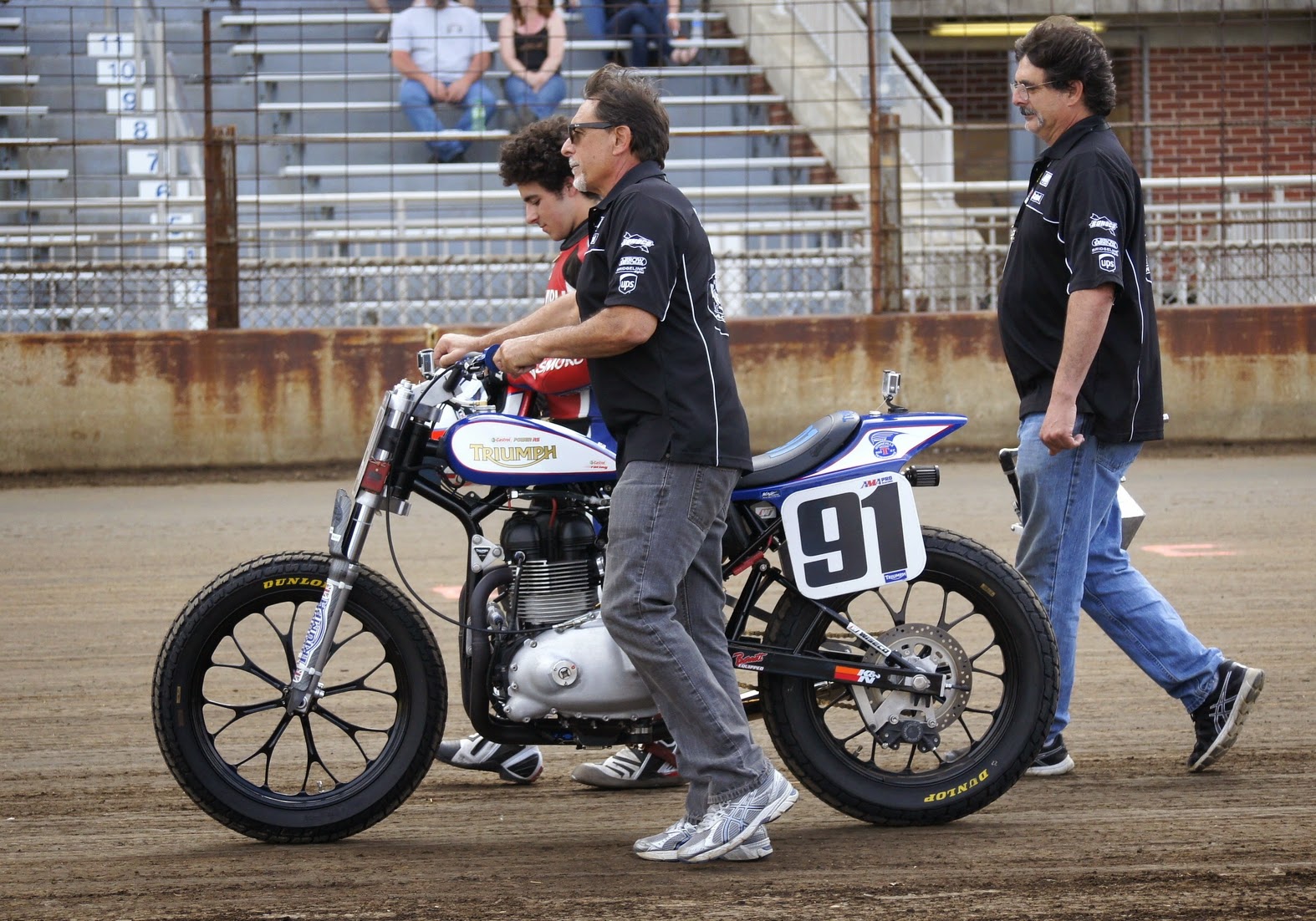 Mikey Martin and the #91 Bonneville Performance/Triumph Factory Racing/Castrol Racing-sponsored Triumph Bonneville team have made some significant strides in what is now their third season together, evidenced by Martin taking the final direct transfer to the main in heat race #3 behind Wiles, Mees and McCoy. Unfortunately, Martin and the slick-looking Bonneville Performance Triumph went down just after the completion of lap 20 (causing one of the four restarts of the day) to bring home a rough 14th-place finish. 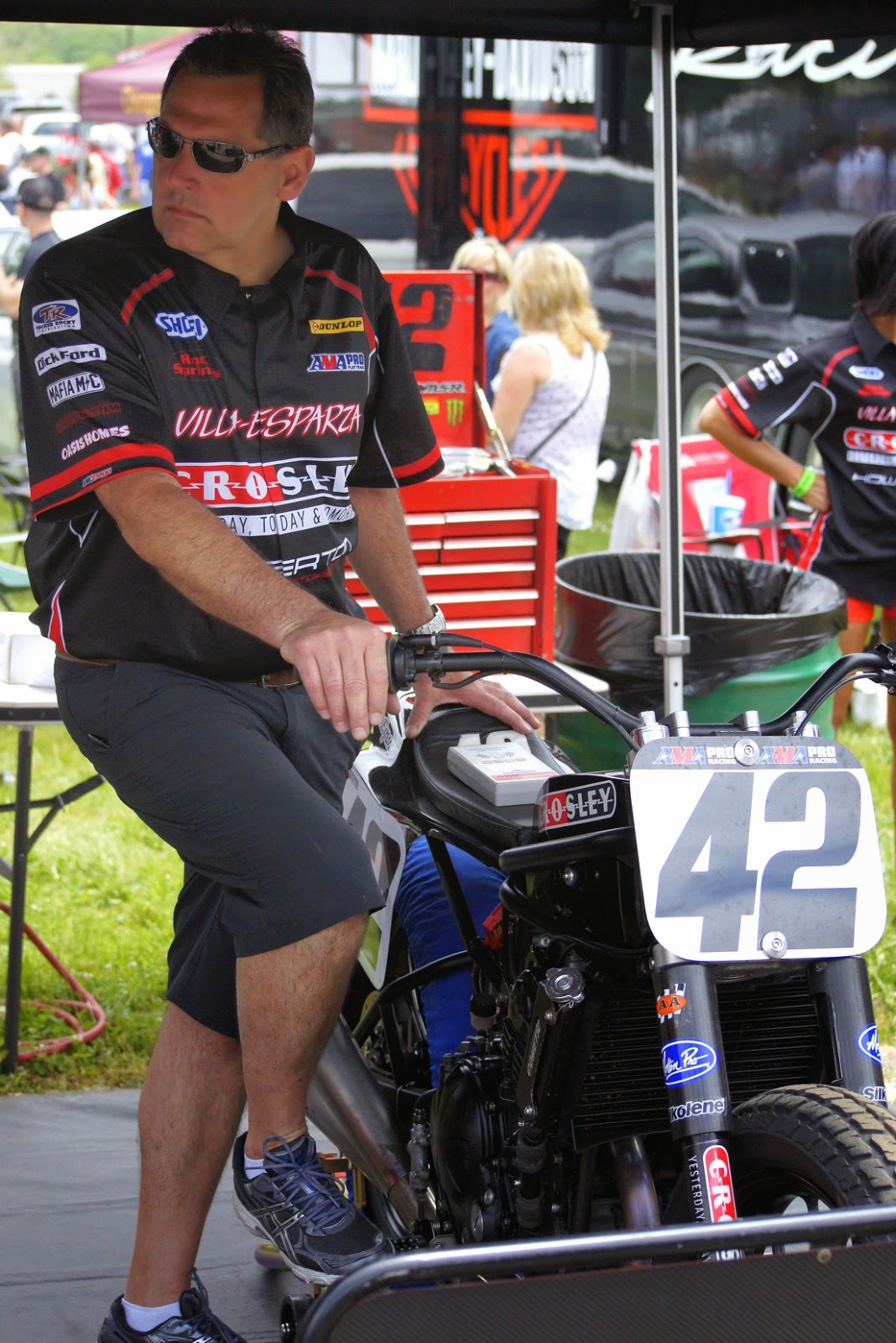 With former team head Rick Howerton mothballing the Howerton Motorsports effort after leading Bryan Smith and the team to a double AMA Grand National Twins Championship effort in 2012-2013, team member Jeff Gordon and returning team wrench Dink Glidden regrouped over the off-season to put together what is looking to be another stellar effort for the #42 team. Taking everything but the frame from the last two seasons' work, Gordon and Glidden took the engine work in-house and between them and Dreyer Motorsports' dyno and eBay purchases, built another winning effort out of JG's Speedway Engines shop on Gasoline Alley on the west side of Indy.

Smith's Dad, Barry, put it all together out of his Michigan-based shop and the team hardly missed a beat without Howerton heading up the effort-although he was on hand to see it, in what appeared to be 'advisory mode.' At the end of the day, big JG had removed himself from 'team stooge'-status to cement himself into the elite list of winning AMA Grand National Championship crew chiefs, tuners and wrench masters. A job well done, and the student of the sport for years that obviously showed that he knows a little bit more about building engines for something other than Indy Lights cars! Not too bad for his first race as a crew chief in the most competitive form of two-wheel, bar banging racing. 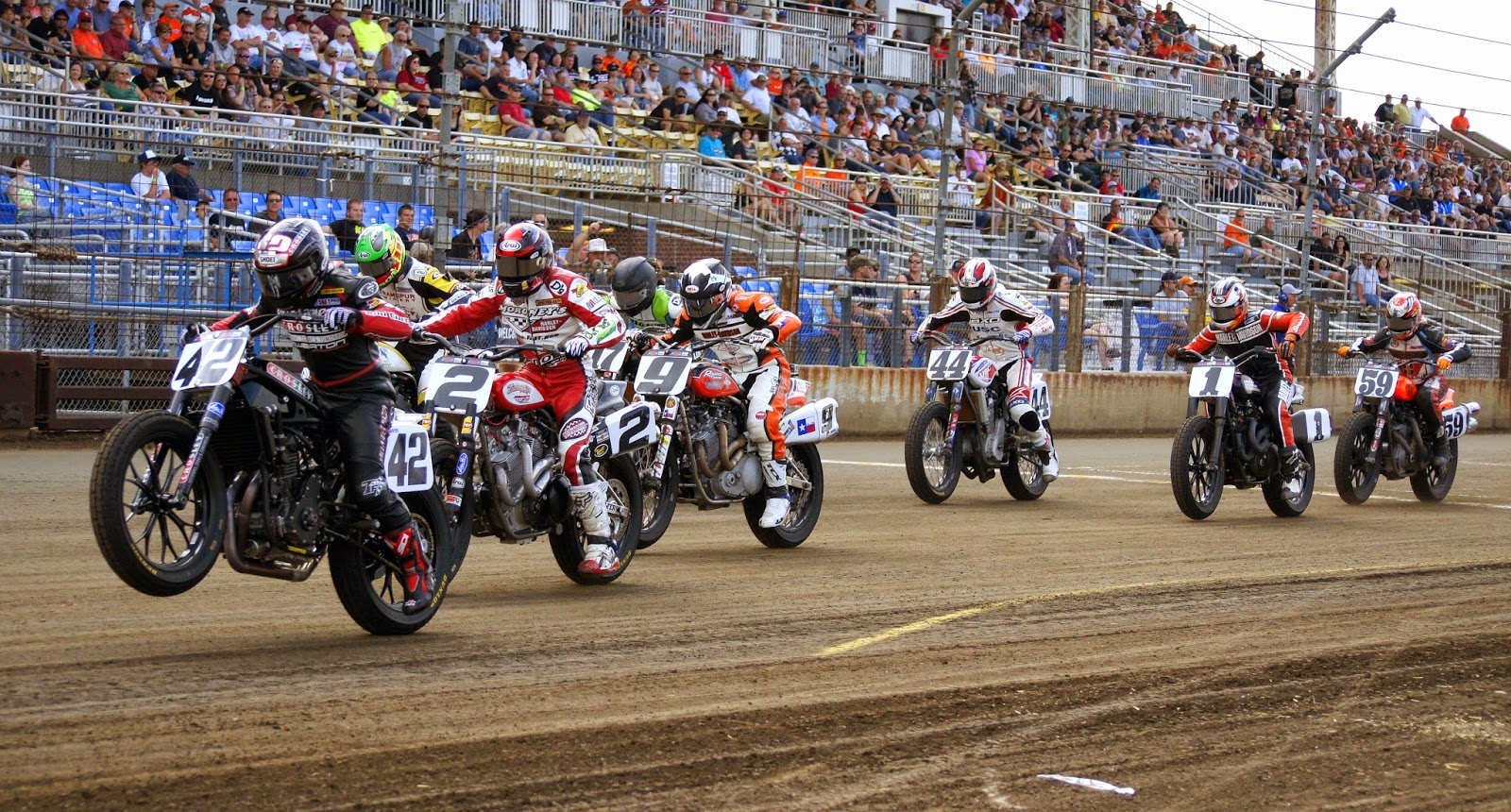 On one of the final restarts, Smith grabs some major throttle to leap off the line leading the seven men who would end up in the top-7 at the end of the marathon stop-and-go day at Springfield. Only Willie McCoy #59 would be the odd man out after lowsiding into turn 3 on the final lap to end up in the 13th-place spot after spending all day running in the top six or seven while breathing the draft at the front.

To get some more perspective on the great day at Springfield from two weeks ago, Larry Lawrence put together another great story for Cycle News and helped to make my outing to, at and from Springfield another super day of bench and track racing. Read his official spin here from The Master of the pen ,er, keyboard and lens.

And North Dakota's own, Dan Jacobson, Sr. also made the trek to the halls of speed in Springfield, and filed this report with Today's Cycle Coverage.com.

And you can also take a look at all of the official results here thanks to AMA Pro Flat Track.

If you're like me, you can never get enough of watching The Rolling Thunder Show perform in what is the best two wheeled racing series in the world, so you can watch the Springfield Mile I in it's entirety here thanks again to AMA Pro Flat Track and FansChoice.TV.