PICKERINGTON, Ohio -- July 5, 2014 --In the early 1950s, three underdog riders were winning AMA Grand Nationals against their better-funded factory rivals out of Europe and Milwaukee, Wis. Whether it was the Springfield Mile, the Charity Newsies or Daytona, Bill Tuman, Bobby Hill and Ernie Beckman put their Indian motorcycles on the top step of the podium.

Known as the Indian Wrecking Crew, Tuman, Hill and Beckman made an indelible mark on the history books and solidified Indian Motocycles' reputation as one of the 20th Century's greatest marques. 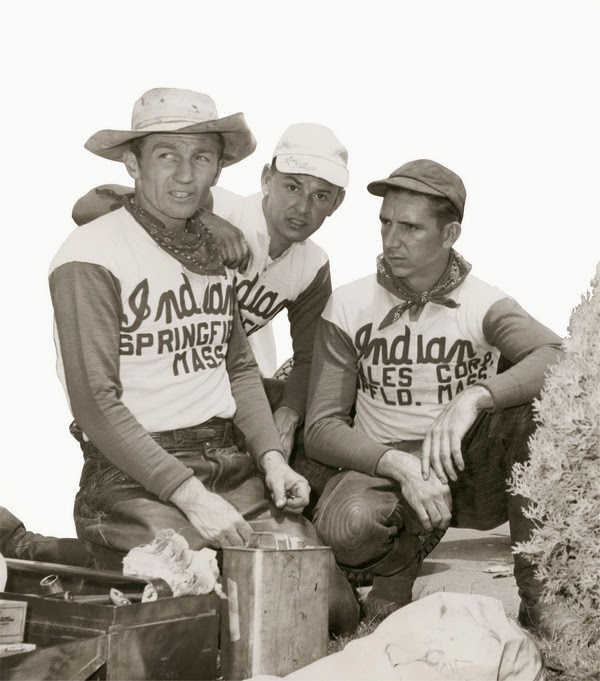 "The dominance of Mr. Tuman, Mr. Hill and the late Mr. Beckman put an unforgettable cap on one era of AMA Grand National competition and helped usher in a new age that changed the landscape for American dirt-track racing forever," said AMA President and CEO Rob Dingman. "We're honored that these great Hall of Famers can join us this summer. For fans of dirt track, Indian Motorcycle and the sport in general, this will be a unique opportunity to hear first hand some of the most legendary stories in racing."

Added Indian Motorcycle External Relations Manager Robert Pandya: "We are proud to be the featured brand at AMA Vintage Motorcycle Days this year. There is no better place to celebrate the history and heritage of motorcycling than at AMA Vintage Motorcycle Days. Seeing and hearing all the great motorcycles and having legends such as Bobby Hill and Bill Tuman as grand marshals is proof that the respect and celebration for motorcycling's past happens every year at this great event. It's one of my favorite events, and we hope to see many Indian Motorcycle fans attend."

"Indian motorcycles have a special place in history," Tuman said. "In those days, when folks were looking for something to take their mind off the war, Indian racers saw some success, and those who witnessed that remember the brand as something from those glory days of racing. It will be fun to spend some time talking about those old stories this summer at AMA Vintage Motorcycle Days."

Hill was AMA National Champion in 1951 and 1952 by virtue of his victories on the Springfield Mile. Hill won a total of 12 AMA Nationals during his professional racing career spanning the years 1947 to 1959. Hill's first win, in Atlanta on Aug. 8, 1948, was one of the most memorable races in AMA racing history. Hill and Billy Huber crossed the line in a dead heat and both were declared a winner, the only time that has happened in AMA Grand National competition.

"In those days, if you wanted to be successful as a racer, you had to do everything yourself," Hill said. "Engines had to be built and modified to race them as hard as we did. Bill and I have been friends -- not only friends, but like brothers -- for all these years, and we'll really enjoy sharing stories of our Indian motorcycle racing days with the fans."

While vintage bikes take center stage, there is something for all motorcycle lovers at the event, including stunt shows, demo rides of current production bikes including Indian Motorcycle, the annual AMA Life Member breakfast, and seminars on a number of topics by noted motorcycling experts.

Advance tickets are available to the general public at www.midohio.com, with all children under 12 admitted free with a paying, supervising adult.