One of the more popular venues on the AMA Pro Flat Track Grand National Championship schedule is less than 24 hours from spraying the pea gravel around as the Lima Half-Mile hopes to have the weather on it's side tomorrow afternoon as riders will head out for the first round of practice at 3:30 PM EDT.

Round 5 of the 2014 season will be the second half-mile on the series' calendar and the third Twins Series event of the year, although the restrictor-less field shouldn't need to worry too much about tire management during the 25-lap National main as was the factor during the Springfield Mile I just over a month ago, but more like keeping the visors and number plates clear to be able to see and be seen during what will surely be a rousing event.

For those of you not being able to line up around the fence tomorrow to fend off the mini-boulders blasting you in the chest or in the face, AMA Pro Flat Track's FansChoice.TV will be bringing you another great production for you to watch in the comfort of your home, so whatever the case, whether you are there or want to be there, you can check it out as if you were present and accounted for.

In the shot above during round 5 of the 2012 AMA Pro Flat Track Grand National Championship season at Lima, 'Dapper' Dan Ingram on the #31J TCR/Zanna Racing/Indy Southside H-D-sponsored XR750 has a nice battle going with Brandon Robinson on the #44 Werner-Springsteen Racing/Action Motorsports/Big Dawg-backed Kawasaki EX650 during the running of the 25-lap National main at the Allen County Fairgrounds as they head into turn 1. Unfortunately for BRob44, his evening came to an abrupt halt just a few laps later after a flat front tire caused him to hurtle, mostly unhurt, thankfully, into the track and ending his evening with a bruised body and a broken machine. Ingram went on to finish 13th in what was his second race as an Expert rider after his return to Grand National racing at the Springfield Mile the month previous.

For all those heading to Lima, ride and drive safe, to all the riders, teams and sponsors, race hard and race safe, and to all those not able to make it, check it out on FansChoice.TV so you won't miss a minute of the action tomorrow afternoon and evening--you won't be sorry. And while you are gearing up, check out AMA Pro Flat Track preview below to help get you revved on up and on the pipe! 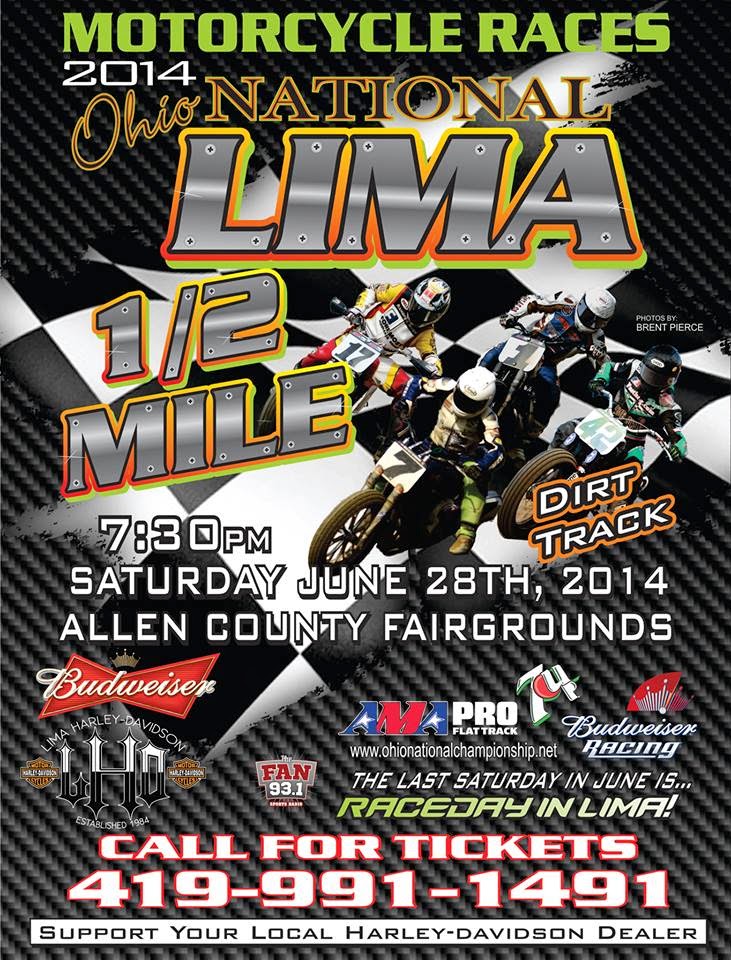