MotorLand Aragon (Spain), June 30, 2012 – Tom Sykes (Kawasaki Racing Team) blasted the previous track best at MotorLand Aragon to record a time of 1 minute 56.552 seconds in Tissot-Superpole, earning his sixth pole position of the season. His new best time was over a second better than the best lap from 2011, a huge margin even at a relatively long circuit like MotorLand Aragon. It was all the more remarkable as his top speed was ten km/h less than the best of his rivals, and he made a mistake in one section of the circuit during his fastest lap. 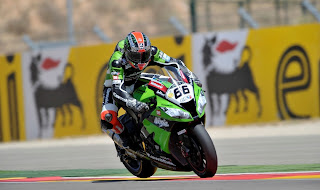 Tom Sykes: “I took a bit of warming up to be honest. In the first two Superpole sessions I thought I was trying hard but obviously not hard enough. Then in SP3 I put a bit extra on the line and fortunately it paid off. I made a mistake in the last sector so to cross the line with that lap time I’m more than happy. We also had a good test here last week and I think we’ve closed the gap to the front guys on a hot and greasy track, which has been a big issue.”

Max Biaggi: “We’re looking good, we’ve been constantly in the top 4 or 5 but we knew that we would be from last year’s strong races. Today we saw other manufacturers go closer and someone else go faster but it was an impressive lap time for Tom, congratulations to him, he was faster than anyone. We could only get second and it’s not so bad but the races are going to be very hard tomorrow.”

Eugene Laverty: “Superpole started well then in the second one I wasn’t able to go so fast with a qualifying tyre and I thought that had spoiled my chances, but my last run was on a soft race tyre and that put me on the front row and made sure we’ll be there challenging tomorrow. We haven’t been out of the top 5 all weekend and it’s been the strongest performance all year, so I’m feeling confident for the races.”

Leon Haslam: “I’ve got to be happy with the front row, but I feel this weekend we’ve been a little bit on the back foot trying to find a good race set-up. But the guys have worked well and in the last two sessions and we found some better pace, and to put the bike on the front row as well has made me really happy.” 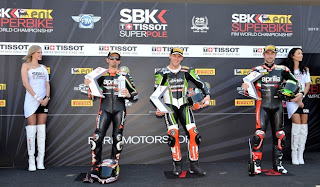 
Jules Cluzel (PTR Honda) popped up to score pole in the Spanish sunshine with a lap time of 2 minutes 02.624 seconds, in what was a close final qualifying session. He headed off three Kawasaki riders, with Lorenzini pairing Sheridan Morais and Kenan Sofuoglu second and third respectively and the final front row slot being taken by Fabien Foret (Kawasaki Intermoto Step Racing).