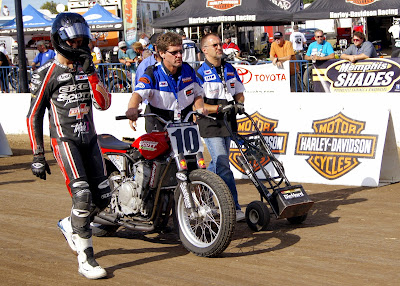 Rider Johnny Lewis #10 and the Scott Powersports/Saddlemen Seats/AXO-sponsored Kawasaki 650R-based team roll out for the National main during round 16 of the 2011 AMA Pro Flat Track Harley-Davidson Insurance Grand National Championship presented by Motorcycle-Superstore.com season at the Springfield Mile II on September 4.

In his second full season of campaigning The Rolling Thunder Show, JL10 and the Scott Powersports Kawasaki team made major strides with their Twins Series program, with Lewis bringing home career-best finishes during the season at the Hagerstown Half-Mile (2nd-place finish) and at the ensuing Springfield Mile II round where Lewis led the first laps of his career on the legendary mile oval and eventually finished in the 6th-place position.

After the Hagerstown round of the 2012 series held last Saturday, July 7, Lewis fought hard for the final spot on the podium with Sammy Halbert and Jeffrey Carver, Jr, to end the evening with a strong 4th-place finish on the clay surface at the Hub City Classic in Maryland.  Running the #10 parallel twin hard into the corners and making veteran-like moves, the former AMA Supermoto Champion and the team are getting to the point where they are a fixture at the front of the field in the best racing series on wheels in the world.

In the previous week's outing at the Lima Half-Mile, Lewis and brother-in-law Jake Johnson battled at the front of the 18-rider pack to card a hard-fought 5th-place spot, and at round 4 of the 2012 AMA Pro Flat Track Harley-Davidson Insurance Grand National Championship presented by Motorcycle-Superstore.com season at the Springfield Mile I on May 27 Lewis again led the field for a career-best eight laps out of the 25-lap National main, eventually coming home in the 5th-place spot, just .247 seconds behind eventual-winner Willie McCoy.

With the way Lewis is acclimating himself to the Kawasaki and to running at the front of The Rolling Thunder Show, it's just a matter of time before the Pennsylvania resident is standing on the top of the box in one of these great races.  With the Sacramento Mile just 17 days away on July 28, could this be the round that we see him on top?  We'll have to wait and see, but things are definitely looking that way for him and the team.

AMA Pro Flat Track has been putting together some great videos this season of highlights from each of the rounds of the AMA Grand National Championship, and their latest, as preparred by the great folks from The Fast and Dirty.com shows Lewis talking about how he goes about approaching the clay surface at Hagertown and gives a nice perspective of how to deal with the slick, grooved surface at the Hub City Classic.

Take a look-see and check out JL10's version of what to look for at a track like this, and the next time you hit a National event take the time to go see Lewis and the team in their pit area.  One of the most approachable riders on the circuit, Lewis' brand of humor should leave you doubled over in laughter, and make you a BIG fan of this fast and fun racer!

Here's the latest video thanks to AMA Pro Flat Track.  Buckle in and hang on and check it out!