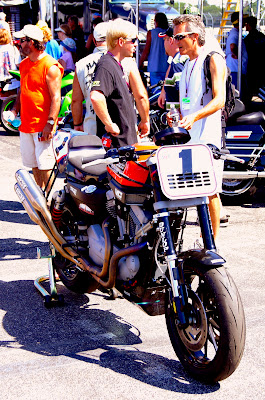 Fans mingle about the infield checking out the manufacturer displays during the 4th Annual Red Bull Indianapolis MotoGP Weekend in August 2011, and among one of the better-noticed displays at the famed Brickyard during the weekend was the Vance & Hines tent.  One of their more prominent displays was the #1 AMA Pro Vance & Hines XR1200 Series machines, of which they are not only (and obviously) the title supporter of the series, but they also supply the race-kit parts for the teams and entrants in the now-3rd year AMA Pro Road Racing series.

Two of the fans on-hand are long-time Indy-area local residents Kyle Plunkett (center, black shirt) and one of my close friends and 'partners-in-crime' Tim Powers (white shirt, glasses and also a former WERA racer and champion.)  We mingled about the displays but the big XR1200 caught our eye.  Mine especially due to the fact that the series has been generating some close and exciting racing (it's no secret I still think the XR1200 Series races at Indy last year were some of, if not THE most exciting and closely-contested motorcycle races to ever hit the bricks in Speedway, IN.), and that the series has made it possible for even the most bare-bones teams to be able to compete for as little cash lay-out in racing that is possible in any racing series across the board.

AMA Pro Road Racing will again return to the now century-old track located on West 16th Street for another go around as the undercard to the MotoGP, Moto2 and Moto3 premier events scheduled over the August 17-19, 2012 weekend.  And AMA Pro Road Racing has just announced the TV schedule times to be shown on SpeedTV and that the total purse has increased for the event.  Great news for both! 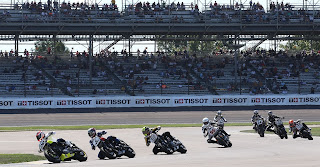 
Thanks to the gracious support of Indianapolis Motor Speedway, the Harley-Davidson Motor Company and Vance & Hines, AMA Pro Racing is proud to announce that the event will also feature an expanded purse. The $50,000 total payout will be split between the two races, and will pay out down to 30th position per the following schedule:


Purse Structure for Each Race

Last year's event saw 33 entries take to the historic 2.621-mile, 16-turn road course aboard the proven Harley-Davidson XR1200 platform in a set of hotly-contested battles. Some of AMA Pro Racing's finest talent took part in the thrilling races, which closed out the day's competition on both Saturday and Sunday and provided an iconic American complement to the exotic prototype machinery.


Entries for the event are still being accepted. To download license applications and entry forms, please visit the Competition Section of AMA Pro Racing's website at http://www.amaproracing.com/competition/index.cfm?cid=20458&tag_id=45.