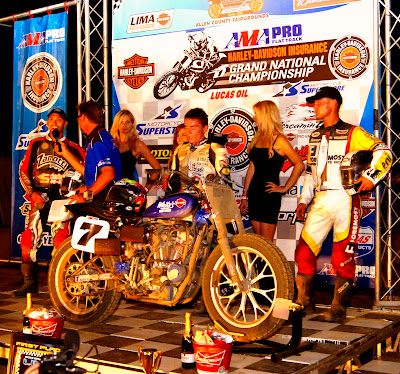 Lima winner Sammy Halbert takes a moment to cool-off while Jake Johnson is all smiles while being interviewed on the podium by AMA Pro Flat Track announcer Barry Boone, after coming home in 3rd place at round 5 of the 2012 AMA Pro Flat Track Harley-Davidson Insurance Grand National Championship presented by Motorcycle-Superstore.com season at the Lima Half-Mile on Saturday June 30, after having his best-ever finish on the pea gravel surface at the fast Ohio track. 2nd-place finisher Henry Wiles was forced to start from the penalty line in the initial start after jumping the start, and had worked his way all the way into 2nd before the red-flag delay brought on by Brandon Robinson's get-off on the #44 Werner-Springsteen Kawasaki.  Robinson was reportedly shaken but not seriously injured, although the bike sustained major damage.

The event was only delayed a few minutes, and after the re-start and subsequent 5-lap dash to the end, Halbert took control while Wiles tried everything he could to catch and pass Halbert.  With two laps to go, Wiles got even with the #7 rider crossing the finish line, but Sammy was able to keep it out front for the last 2600 feet in spite of Hammerin' Hank's nifty cross-over move coming out of turn 3 in the run to the checkers.  Halbert and Wiles disagreed on the podium as to who was at fault and shared some words as to what or who was at fault, but quickly went about the victory ceremonies before any major confrontations ensued.  From our standpoint on the front straight, it looked like a case of some heavy racing, with no major contact.  But to paraphrase, we weren't in the middle of the battle and also several hundred feet away from where the supposed 'incident' took place.

In a thrilling evening of fast and furious action at the Allen County Fairgrounds, Slammin' Sammy again walked away from the field after chasing down early leaders Johnny Lewis and Jake Johnson and took his second victory-in-a-row on his #7 South East H-D/The South Ass/Mo Vaughn Transport/LZ Racing-sponsored XR750.  Halbert has the best record at Lima over the course of the last three seasons after finishing 2nd during the 2010 event behind then-winner Wiles. 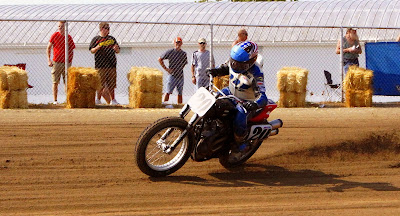 Matt Weidman on his #20 GCR/White's H-D/SNIP/Fiorio Investments-sponsored H-D XR750 throws a rooster tail as he heads out of turn 4 during the final qualifying round at the Lima Half-Mile on Saturday June 30.  Mighty Matt was the fast qualifier for the night among the 44 Expert riders on-hand, but unfortunately on the next go-around while coming out of turn 2 caught the fence with his foot and footpeg, which resultingly pitched him over the bike and slammed him hard into the racing surface, landing a good 20-25 feet away from his bike, which was all but destroyed in the massive get-off.

Worse yet, the accident slammed Matt so hard that he suffered from a broken left collarbone and right foot, and was forced to sit out the evening after having placed 2nd in the event in 2011 and 3rd in 2010.  According to his Mom, Rachel (who was on-hand for the first time in the 2012 season along with Dad Guy, who now has some serious work ahead of him repairing and replacing what was left of Matt's machine) and she stated other then being a little groggy and the broken bones he will be back in roughly 6-8 weeks.  We wish Matt a speedy and complete recovery as he will be sorely missed in the field.

With Jared Mees' finish of 4th on the #9 Rogers Racing XR750 in the main event, The Jammer retained his lead in the points over now-2nd place man, Jake Johnson by 11 points (93-82), with Lewis in 3rd just 1 point back.  Sammy Halbert sits in the 4th spot with 77 points, and Weidman and Wiles are now tied for 5th with 64 points heading to round 6 of the season at the Hagerstown, MD. half-mile on Saturday July 7.

You can check out the official press release below from AMA Pro Flat Track, who in spite of the adverse weather conditions that rolled through Lima on Friday afternoon and Saturday morning, put on another stellar event.