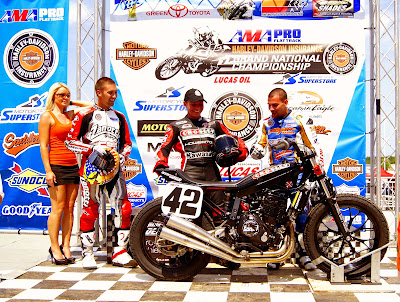 After making his debut with the Howerton/Eaken team at the first mile event of the season at the Springfield Mile I back on May 27, Flyin' Bryan took the new-build Kawi to a hard-earned 3rd-place finish, but for want of more after the checkers had flown.  Last night at the Cal Expo Fairgrounds in California, Smith delivered and gave the new team their very first victory in AMA Pro Flat Track competition, and most likely left the sold-out crowd, teams and riders wondering 'what next?!' with three mile events yet to run this season at just shy of the half-way mark in the season's overall schedule.

After announcing in early April that he would be riding for IndyCar fabricator and master builder Rick Howerton in this year's Twins Series mile events, Smith made a move back to a Japanese twin machine, similar to the one he took to the Lucas Oil Indy Mile and Springfield Mile II wins back in the 2010 season while riding for the Werner-Springsteen team.  But unlike those wins, this one will be even more sweet for Smith and especially for long-time Indy westside resident Howerton, who grew up around the flat track scene and used to hang with the Eaken and Gene Romero-led Team Honda flat track team that based it's operations down the road from Howerton's father's shop in the early-to-mid '80s.

Fast forward to the end of the 2010 season and Howerton was ready to build his 'dream' flat track machine and take it to the top of the box with a top-level rider capable of doing so.  After debuting the machine's original incarnation at the Springfield Mile I in May 2011 with former Australian Flat Track Champ Luke Gough, Howerton and Smith hooked-up to contend the five mile events for the 2012 season and 'test the water' so to speak.  And after just two of those five events, I imagine that the water was pretty sparkling and real tasty last night after Smith outlasted Johnson on the #1 Zanotti Racing XR750 and Mees on the #9 Rogers Racing XR750, two long-time championship contending riders and organizations that always get great results on the fast, big horsepower mile tracks on the schedule.  And to do it after just two races together has to feel like a great triumph for their new breakout effort.

A big congratulations to the team that consists of rider Smith, Bryan's dad Barry, team owner and master builder Howerton, Howerton's right hand man, close friend and feverish flat track fan Jeff Gordon, Dink (one of the wrenches on the team that has worked for Dreyer Honda on Indy's westside for decades) and a big handful of helpers, gofers, volunteers and friends who helped to make Rick's dream possible.  Take a bow guys, you all deserve it, especially you Rick, who has toiled and sweated over and around his dream for over 2500 hours in the last 21-22 months to be able to get out and run with the big boys.  And man, you just beat them all.  Great job!

Now the big question to be asked, and answered in 20 more days, can they do it again at this year's Lucas Oil Indy Mile on August 18, and in front of the hometown crowd?  I've said all week I wouldn't bet against them, and if I were a betting man, my money would have paid off in spades last night and possibly again at round 10 at the Indiana State Fairgrounds just around the corner.  Time will tell, but if I were a rider and/or team owner in the greatest racing series on wheels in the world, I'd be shaking in my boots come the next three mile events of the season.

In the shot above from the Springfield Mile I round on May 27, Jake Johnson, Bryan Smith and Jared Mees are all smiles on the Dash for Cash podium after Smith had taken his first 'official' win for the Crosley/Howerton-Eaken Kawasaki team and collected his first paycheck and points towards the championship.  No where but in AMA Pro Flat Track competition will you see more smiles, excitement and comraderie then what is shown and evident in The Rolling Thunder Show as evidenced here by the great time these three are having during the ceremonies.  When was the last time you saw anyone smiling this big after losing, like what Johnson and Mees are showing here, in any other form of motor sports in the world?!  No where me thinks!

You can check out the press release below thanks to the great crew at AMA Pro Flat Track, and the rest of results, too.  Round 8 of the 2012 AMA Pro Flat Track Harley-Davidson Insurance Grand National Championship presented by Motorcycle-Superstore.com season heads to the Castle Rock TT on Saturday, August 4 before making the swing back to the midwest for round 9 at the Peoria TT on Sunday, August 12.