Biaggi and Melandri share the wins again at MotorLand


There was drama aplenty in warm conditions, but raceday temperatures had cooled from the fiery intensity of the first two days, a factor that played a part for some riders in their final fortunes. Strong winds also affected the riders today, but the abiding memory of all will be a superb second race in which Melandri held off the attentions of not only Biaggi, but also two other Aprilia riders, Eugene Laverty (Aprilia Racing Team) and Chaz Davies (ParkinGO MTC Racing Aprilia). Davies had to catch up the leading trio in a forceful run to the front and was rewarded with his first career podium to add to his fourth place from race one.


Biaggi secured a tight win by only 0.278 seconds from his great rival Melandri. This was Biaggi’s fourth win of 2012, and his third in a row. The top two were well clear of the battle for third, which eventually went to Carlos Checa (Althea Racing Ducati) from Davies, even though he took it in bizarre circumstances after Tom Sykes (Kawasaki Racing Team) was deprived of what looked like a sure podium place when Ayrton Badovini (BMW Motorrad Italia GoldBet) lost the front and his machine, which then hit Sykes’ rear wheel, and both riders fell.

Max Biaggi: “It was a nice race. I saw I could stay in the lead. The tyres are always a problem here and it’s very difficult to keep the pace, but we were working good all weekend to be comfortable with the tyres moving around. There were only two riders in front, we tried to overtake each other and understand where and what was possible to do at the end. The result could have been the other way around but this time I did it so I’m happy.”

Marco Melandri: “I was struggling to pass Laverty and Sykes and then I had to push a lot to catch Max who was leading. When I was there I tried to take him but it was not easy. In the end he passed me quite easy because he was faster than me, but it was a good result anyway. BMW and the team have been working very well and we will try and win race 2.”

Carlos Checa: “We always fight until the end, you never know! Today for sure we were lucky because we were not in the best position so to be here was quite a surprise. Hopefully Badovini and Sykes are OK after their crash, but I’m quite satisfied for the final result. It’s my home race and it was difficult to be in front fighting for the win today.“ 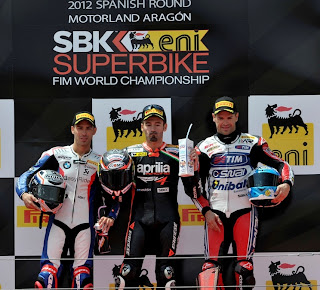 
Melandri secured his third win of the season after a spectacularly tight fight against three other riders. Second was Eugene Laverty (Aprilia Racing) who lost out by only 0.042 seconds. Immediately behind, Davies held off the attention of Biaggi to take his first ever podium in the championship, as the top four were only 0.484 seconds apart after 20 laps. Behind the leading quartet Jonathan Rea (Honda World Superbike Team) went fifth after recovering from another bad start, with Leon Haslam (BMW Motorrad Motorsport), Checa and Sykes in basically the same group for most of the race.

Marco Melandri: “I have no words actually! After race 1 I was a little disappointed so I tried to get a win in race 2, it was not easy because the wind was very strong. Eugene started to lead the race and was very fast, suddenly with three laps to go Max passed me and when I passed him back I went wide then Chaz passed me. We were running so wide and so fast and I had no plan for the last lap! To win here has been beautiful.” 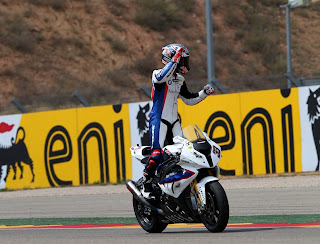 
Eugene Laverty: “It was close with Marco on the last lap, he got the better of me. Still it’s nice to be back on the podium after Assen and Monza where we were top 3, and where I think we have belonged in the last three rounds but where we had small electronic problems that held us back. But we’re back where we belong, which is fighting for race wins. The second race was a really good battle, we made some changes and I was much happier.”

Chaz Davies: “What a race! I didn’t get off to the greatest start and the first couple of laps weren’t good either but I put my head down and got to fourth. I tried to keep chipping away and eventually caught the top 3. I had a great race, enjoyed every moment of it. I was really surprised to be on the podium but I knew we had the pace.”


After an accident delayed the eventual running of the full 18-lap Supersport race, Kenan Sofuoglu (Kawasaki Lorenzini) crossed the line first but was demoted four places in the final results because of a coming together between him and eventual second place rider Fabien Foret (Kawasaki Intermoto Step). The final race winner was Sam Lowes (Bogdanka PTR Honda) after Sofuoglu was penalised for not dropping the regulation three places during the race. It was Lowes' second win of the year and it puts him second overall in the championship, after PTR Honda rider and pole man Jules Cluzel had crashed out early on. 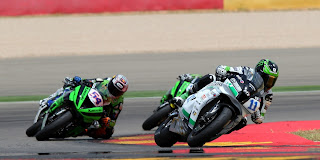