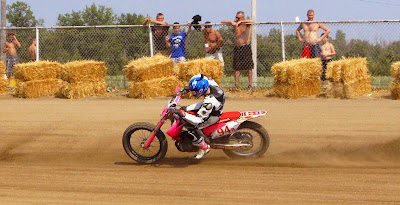 Ryans Wells on the #94B Weirbach Racing/General Engineering/Barnett/Spectro-sponsored Honda CRF450R shows some serious body english heading out of turn 2 during second round qualifying for round 5 of the 2012 AMA Pro Flat Track Harley-Davidson Insurance Grand National Championship presented by Motorcycle-Superstore.com season at the Allen County Fairgrounds in Lima, OH.

Wells, in just his first season of racing in the AMA Pro Motorcycle-Superstore.com Pro Singles Series Championship has established himself as one of the top riders in the series and one that could be hard to beat for the overall title come the end of the year.  After qualifying fastest out of the 51 Pro Singles riders who took a timed lap on the half-mile pea gravel track, Wells promptly went out and won his heat race to start the evening off just right for the Ottumwa, IA.-based team.

After finishing in the 4th-place slot for the Pro Singles main behind winner Zakk Palmer, runner-up Benjamin Myers and 3rd-place finisher Jacob Constantine, the New York State resident and former Horizon Award winner moved himself into the 2nd-place spot of the championship, just two points down from title leader Gerit Callies (55-53) with 3rd-place in the Pro Singles Championship title hunt, Jason Isennock another nine points back (44 points.)

The AMA Pro Motorcycle-Superstore.com Pro Singles Championship riders head to the Hagerstown Half-Mile on Saturday, July 7 for round 6 of the 2012 season, and you can bet that Ryan Wells will be fighting at the front throughout the day.

You can read Weirbach Racing's full press release below on Lima!


On June 30th, we traveled to Lima, Ohio for the cushion half mile.


This was the 5th Grand National race of our series.  Out of the whole season,
this was the race I was most excited for since I grew up racing on cushion
half miles.  Coming into this race I was 10 points out of the series points
lead in 3rd place, so the main goal was to beat the points leader.

We started out the day very strong being the fastest qualifier for the Pro
Singles and 2nd fastest overall, that gave me pole position for the heat
race.  In the heat race I jumped out to an early lead and focused on making
no mistakes.  I ended up winning heat race number 1 by a fairly large margin. 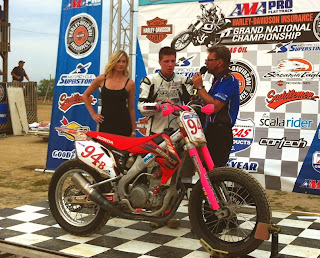 Ryan Wells #94B is shown on the podium at the Lima half-mile round of the 2012 AMA Pro Motorcycle-Superstore.com Pro Singles Championship after winning the first heat race on his Weirbach Racing Honda CRF450R.  Photo by and  courtesy of Weirbach Racing.


Since the bike had been working awesome all day long we decided to not
change anything.  I was sitting on the pole position and I picked outside on
the front row for the finial.

Off the start I came out of the first turn in 2nd and was charging hard, running in the first 2 spots for a few laps.  The track immediately brushed off, it was very rough and tough to ride, but I just put my head down and kept chuggin along.

I ended up in 4th place in the main, which brought me within 2 points of the lead in 2nd place.

This was exactly what we need to do before coming to the next National in Hagerstown,
Maryland this weekend.

Big thanks to all the sponsors we have that make it possible for me to attend and participate in every race.  Please stop by our pit area and say hello. 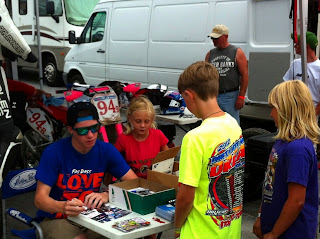 Ryan Wells signs autographs for some of his fans at the Lima half-mile on Saturday, June 30 at round 5 of the 2012 AMA Pro Flat Track Harley-Davidson Insurance Grand National Championship presented by Motorcycle-Superstore.com season.  Weirbach Racing's Wells finished 4th on the day in the Pro Singles National main event and came within two points of the series' points lead in his first full season in the class.  Photo by and courtesy of Weirbach Racing.