Electric Motorcycle Class Showdown All Set With Chip Yates and Greg Tracy At The Pikes Peak International Hill Climb
Visit us at: www.ppihc.com
Colorado Springs, April 16, 2013-----An epic head-to-head showdown is all set in the electric motorcycle class in the Exhibition Powersport division in the 91st Pikes Peak International Hill Climb on Jun 30.
The electric motorcycle duel on America’s Mountain will pit the event’s racer with the fastest time on an electric bike, Chip Yates, against six-time Pikes Peak motorcycle champion Greg Tracy. They are the only entries in this class and the matchup promises to be a highlight of the day.
The two professional motorcycle racers will face off on the Peak with Yates selecting an American-made Lightning Electric Superbike, and Tracy on his new concept model Amarok P1A Super Bike.
During the 2012 Race to the Clouds, Tracy and his Ducati teammate, Carlin Dunne, were the first motorcyclists in history of the race to reach the finish line under ten minutes with their fuel-powered Multistradas. Dunne clocked 9:52.819 and Tracy was right behind at 9:58.262 in the 1205 cc class.

Pikes Peak 2012 Electric Motorcycle photo courtesy of PPIHC.
Tracy (Long Beach, CA) has won six titles in several divisions since 1996 on Pikes Peak, including victories in the 1205CC division in 2009 and 2010.
Yates (Aliso Viejo, CA) is an electric vehicle pioneer known for risky record-setting adventures in extreme electric vehicles of his own design. This year’s Pikes Peak race marks the first time Yates has put his trust in an electric manufacturer to build and supply his race machine. Lightning also supplies the lithium-ion batteries that power his world record breaking electric airplane.
Yates first took on Pikes Peak as a rookie in 2011. On the paved section of the course, his rookie split times landed him 9th overall among 112 motorcycles before the ensuing 2.6 miles of bumpy dirt roads in the middle of the course slowed his final result to a 12:50.094. With the course being completely paved this year, Yates’ aggressive knee-dragging style learned from his FIM World Supersport and AMA Pro Daytona SportBike racing background makes him a solid contender for a new speed mark in the class.
“The Lightning Electric Superbike is the only electric motorcycle to ever show a higher top speed than my electric bike, which is enjoying retirement at the Petersen Automotive Museum right now,” said Yates. When I heard Greg Tracy was coming to the mountain on an electric bike this year, I realized my Pikes Peak best time was at risk and so I turned to Lightning Motorcycles to help me raise the bar and hang on to the title.”
“The amazing thing about the Lightning bike, is that it‘s a full-on 180-horsepower electric superbike, faster than a Suzuki GSX-R1000, that anyone can buy – it’s actually in production up in Northern California” added Yates.
Amarok and Tracy will be racing the P1A, an advanced electric motorcycle concept demonstrator developed over the past three years.  The P1A boasts a hand crafted aluminum monocoque design that dramatically reduces weight and improves handling.  “The 147kg (325lb) Amarok P1 concept is about making the best handling motorcycle on the planet.  There are electric bikes with much more power, but we want to own the corners.  The 156 turns of Pikes Peak represent to us the best opportunity to prove our core belief that in vehicle design, you can do more with less.” says co-founder Michael Uhlarik.
The legendary race is the second oldest motor sports race in the United States behind the Indy 500. With 156 turns over 12.42 miles, sheer drop-offs and an elevation that increases by more than 5,000 feet from the start line to the 14,110-foot summit on a fully-paved public highway, Pikes Peak is the perfect proving ground for the Lightning Electric Superbike, which uses an innovative electric power train to defy the thin, power-sapping Colorado mountain air.
About Lightning Motorcycles

Lightning Motorcycles was founded by Richard Hatfield in San Carlos, Calif. in 1999. By 2009, the company had created the Fastest Super Bike in the world and set the land speed record in 2010 at 215.960 mph. The team broke its own record in 2011 with a top speed of 218.637. Since then, Lightning Motorcycles has established its dominance competing and winning in multiple internationally recognized superbike races. The company’s mission is to develop the most innovative competition race bike and use that technology to produce and distribute affordable two wheel electric vehicles to commuter markets worldwide. For additional information, please visit www.lightningmotorcycle.com
About Chip Yates
Chip Yates is an American inventor, superbike racer, and electric vehicle pioneer whose hair-raising adventures have netted 11 world records in electric vehicles of his own design. Most recently, he designed, built and flew the world’s fastest electric airplane under his company name “Flight of the Century”. He is a frequent motivational speaker and part-time Discovery Channel host who thrives on pushing limits and meeting interesting people. Chip will be on hand in the Lightning Motorcycle booth to chat with race fans during “Fan Fest” in downtown Colorado Springs, scheduled for Friday evening, June 28th. 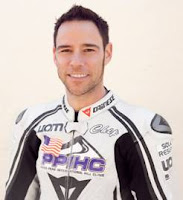 Chip Yates photo courtesy of PPIHC.
Additional details of Chip’s electric airplane and racing programs are available at: www.flightofthecentury.com  www.yateselectrospace.com  www.chipyates.com  www.youtube.com/chipyates
PPIHC Tickets Available Now
Fans of the Pikes Peak International Hill Climb can purchase tickets now for the June 30, 2013 race and assure themselves a spot on the Peak for what promises to be the best in the event’s long and storied history.
General admission seats are priced at $40.00 each, and the popular Family Four-Pack is priced at $135.00 when purchased in advance.
Tickets may be purchased on the PPIHC official website: www.ppihc.com
Camping permits, sold on a first-come, first-served basis, are available at $100.00 each.
(Note, PPIHC policy for the Family Four-Pack mandates that all four people must be in one vehicle on race day and each occupant in a vehicle with a camping permit must also have a race ticket.)
Race tickets are required for anyone 10 years of age and older.
Fan Fest, Friday, June 28 (5:00-10:00 p.m.)
Fan Fest is the annual pre-race celebration held in downtown Colorado Springs (Tejon St. between Colorado Ave. & Bijou St.) promoting the Pikes Peak International Hill Climb.

More than 30,000 fans are expected to attend. This event is FREE and typically features a large Budweiser beer garden, live bands, chili cook-off for the fans.
Downtown business owners Sam and Kathy Guadagnoli will present the Red Bull Jumpers and Skydivers.
Top race qualifiers will display their vehicles (cars, quads, motorcycles, etc.), give driver demos and be present for autograph sessions.  In addition, the PPIHC mobile museum will be on-site and exclusive PPIHC merchandise will be available for purchase. Tickets to the 91st running will also be on sale.
Mike Moran
Senior Media Consultant
The Colorado Springs Sports Corporation
1631 Mesa Ave., Suite E
Colorado Springs, CO 80906
(719) 634-7333, ext.1011
mike@thesportscorp.org
Visit Us At: www.coloradospringssports.org